After stops in London and other global cities for viewings, a painting believed to be by Leonardo da Vinci has sold at auction in New York for a record $450 million. The painting, Salvator Mundi (Saviour of the World), is among fewer than 20 by the Renaissance painter who lived over 500 years ago that […] 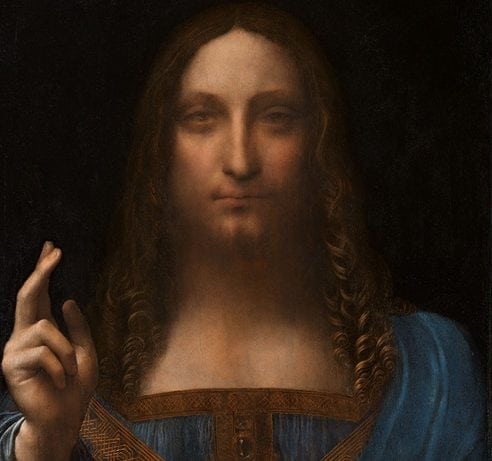 After stops in London and other global cities for viewings, a painting believed to be by Leonardo da Vinci has sold at auction in New York for a record $450 million.

The painting, Salvator Mundi (Saviour of the World), is among fewer than 20 by the Renaissance painter who lived over 500 years ago that are still in existence and the only one that was privately owned. All others are in museums and art galleries around the globe.

“On a historic night at Christie’s in New York, Salvator Mundi, a depiction of Christ as Saviour of the World by one of history’s greatest and most renowned artists, sold for $450,312,500/£342,182,751 (including buyer’s premium), becoming the most expensive painting ever sold at auction,” Christie’s said in a statement.

Six years of investigations and research confirmed the work as an authentic one by Da Vinci, Christie’s said. It had been mostly painted over and art experts had assumed it was a copy. The painting had previously been sold at auction, in the US in 1958, for just £45.

In recent weeks, Christie’s has been engaged in some highly choreographed exhibition logistics as it moved the centuries-old Da Vinci around the world so people could get a glimpse of it up close. Altogether, over 20,000 people turned up in London, Hong Kong, San Francisco and, eventually, New York to see the famous painting before it was auctioned.

Frantic bidding broke out during the latter stages of the Salvator Mundi, with many bids coming in via telephone from various parts of the world. The opening price was $100 million and after 20 minutes of offers from phone-holding bidders in the New York auction room, the gavel came down at $400 million ($450.5 million including fees) and an unidentified buyer had won the fine-art prize.

Loic Gouzer, head of Post-War and Contemporary Art at Christie’s in New York, said the ancient painting was a timeless piece that continued to impact the art world.

“Salvator Mundi is a painting of the most iconic figure in the world by the most important artist of all time. The opportunity to bring this masterpiece to the market is an honour that comes around once in a lifetime,” he said.

“Despite being created approximately 500 years ago, the work of Leonardo is just as influential to the art that is being created today as it was in the 15th and 16th centuries. We felt that offering this painting within the context of our Post-War and Contemporary Evening Sale is a testament to the enduring relevance of this picture.”

Indeed, Da Vinci may well be one of the most enduring artists of all time. His other masterpiece is arguably the most famous painting of all: the the Mona Lisa, which hangs in the Louvre in Paris and attracts millions of people each year who come to gaze at the ethereal face and her famously enigmatic smile.

There was other big art-investment news during Christie’s Post-War and Contemporary Art Evening Sale — notably Andy Warhol’s Sixty Last Suppers, which went for $60,875,000. Made around a year before the Pop artist died, in 1987, the creation features variations of Da Vinci’s Last Supper as Warhol explored themes of religion and mortality.

“The idea for a group of works based on Leonardo’s Renaissance masterpiece was proposed to Warhol in 1984 by Milan-based gallerist Alexander Iolas. Warhol leapt at the idea of putting his own stamp on one of the best-known images in the world, and produced an exhaustive series of variations — some freehand, some showing outlines, some, as in this example, using a photostat of the oil painting as the source image for a silkscreen,” said  the auction house.