The items, which once belonged to a chief named Crowfoot of the Blackfoot Nation, cost the museum £10 in 1904 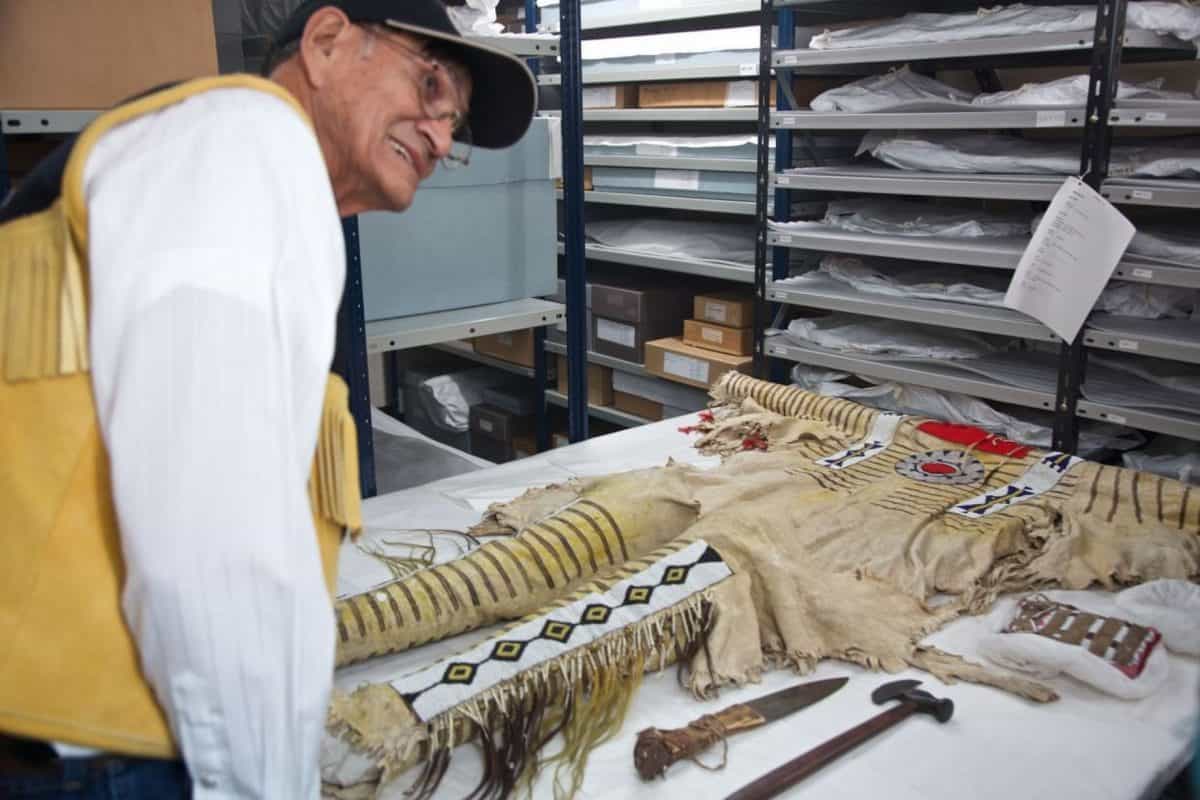 A furious row has broken out after a British museum refused to give back sacred artifacts to indigenous Canadians that it bought more than 100 years ago.

The Royal Albert Memorial Museum paid just £10 in 1904 for items that once belonged to a chief named Crowfoot of the Blackfoot Nation.

These included a buckskin shirt and leggings, a dee hide necklace strung with grizzly bear claws and even a hardwood bow and arrow

Efforts have been over several years to get them repatriated but have fallen on deaf ears.

And fresh calls have now been made to get the items returned to a Blackfoot-run cultural and educational centre in Canada close to where he was buried.

But the museum, in Exeter, Devon, is still refusing to hand them back and claim its proposed new home is not adequately equipped to look after them.

This is also disputed by the Blackfoot Crossing Historical Park who claim they have a purpose-built room which cost $100,000 and is carefully monitored to control humidity, temperature and light to preserve the delicate relics.

The RAMM bought them from the family of Cecil Denny, an English-born member of the Canadian mounted police who was one of the signatories of a treaty Crowfoot signed with the Crown in 1877.

It states on its website: “A hand-written note in the museum states that, according to Denny’s sister, items were purchased by Denny at the time of signing Treaty 7 at Bow River, Alberta, in 1877.

“Denny was one of the signatories and acquired the regalia as a way of marking or honouring the words of the treaty.”

But members of the Blackfoot – also known as Siksika – first nation are demanding their return.

“We are currently in our second decade of repatriation efforts, with no end in sight,” said Stephen Yellow Old Woman, general manager of Blackfoot Crossing Historical Park (BCHP).

“Much of this whole experience has been shocking to us.

“It is like Siksika and Crowfoot are currently in a long dark tunnel with no end in sight.

“We believe many of these items are calling to come home.

“That’s what this lodge’s purpose is – to give them a home to come back to.”

The RAMM – which is owned by Exeter City Council – is currently refusing to give the items back as they say it is not clear the BCHP have the facilities to look after them properly.

A spokesperson said: “It is not accredited with the Canadian Museums Association.

“Under RAMM’s current policy, the long-term preservation of returned material remains a consideration.

“For this reason, details of environmental conditions and a current business plan are needed to inform ECC’s councillors, who make the final decision, that items will be transferred to organisations who have the necessary structure and resources to ensure the long-term care of repatriated material.

“We also request details of governance to minimise the risk of competing or conflicting claims for the same material. As yet, not all of this information has been sent by BCHP, and therefore negotiations have stalled.”

The debate over the Crowfoot of the Blackfoot Nation relics has been raging for years now.

Yellow Old Woman claims they began repatriation attempts in 2008. In 2013, Blackfoot representatives flew to Britain to see the relics.

That was followed by a 2014 trip in which RAMM staff visited the historical park and Blackfoot nations in Alberta.

A request to have the items repatriated was then made in 2015.

The spokesperson for the RAMM claimed it has attempted to break the deadlock.

They added: “In a spirit of co-operation to progress the repatriation request, RAMM has written directly to the Siksika Tribal Council, elected representatives of the Siksika nation, proposing that the request is considered by ECC Executive Committee in June 2020 and Council in mid-July.

“The letter asked for information on the governance relationship between BCHP and the tribal council and a clarification on whether it is proposed the future ownership of the regalia would lie with BCHP or the Siksika Tribal Council.”

The RAMM added that items including human remains and sacred artifacts have been returned to indigenous communities including Tasmanian Aborigines, Maori and the Ngarrindjeri of southern Australia.

They stressed that each claim is dealt with on a case-by-case basis, and the museum will also this year review its methods of dealing with such applications.