An early John Constable painting incorrectly attributed to two other artists is set to sell for £3 million after emerging for the first time in decades. ‘Dedham Vale with the River Stour in Flood’ has been described as “without question one of the most exciting and important” Constable paintings to be rediscovered in half-a-century. The […]

by Clair Hart
in Arts 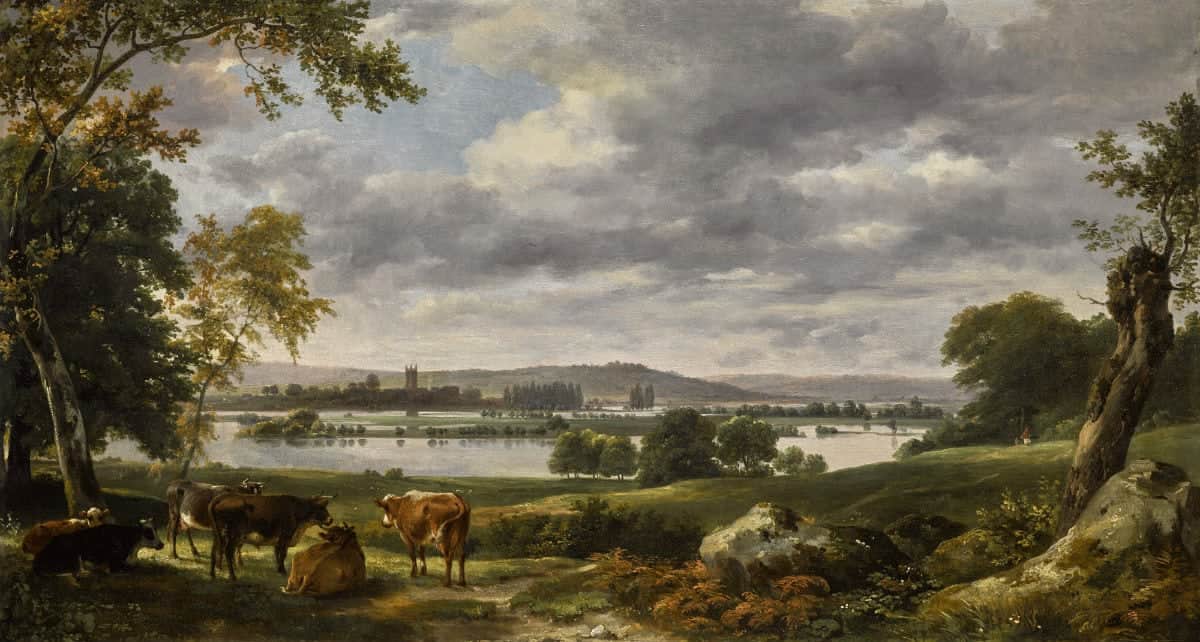 An early John Constable painting incorrectly attributed to two other artists is set to sell for £3 million after emerging for the first time in decades.

‘Dedham Vale with the River Stour in Flood’ has been described as “without question one of the most exciting and important” Constable paintings to be rediscovered in half-a-century.

The landscape, painted from the grounds of Old Hall, East Bergholt, Suffolk, shows a herd of cows grazing in front of the flooded countryside.

But it wasn’t until around ten years ago the location was identified and Constable was confirmed as the painter, creating a huge buzz among scholars of the sought-after British artist.

Constable painted it in his late thirties, between 1814 and 1817, and it belongs to a small group of his early Suffolk paintings which remain in private hands.

It was previously thought Thomas Hofland, a minor journeyman landscapist, was behind the 51cm x 91.5 cm oil on canvas painting

By 1991, when the location was identified as a view of Dedham Vale in Suffolk, the painting was attribute Ramsay Richard Reinagle (1775-1862), an early associate of Constable’s at the Royal Academy Schools in London when they were both studying there in the late 1790s.

Paintings by Reinagle have sold at auction over the past two years for between £300 and £30,000.

But because it has now been identified as a Constable piece, Sotheby’s has valued it at £3 million ahead of the auction house’s Old Masters Evening sale in London on December 6.

Julian Gascoigne, senior specialist, British Paintings at Sotheby’s said: “Constable’s views of Dedham Vale and the Stour valley have become icons of British art and define for many everything that is quintessential about the English countryside.

“Dedham Vale with the River Stour in Flood was long mistakenly thought to be by Ramsay Richard Reinagle, a friend and contemporary of Constable’s, but recent scientific analysis and up-to-date connoisseurship has unanimously returned the work to its rightful place among the canon of the great master’s work and established beyond doubt its true authorship.

“It is without question one of the most exciting and important additions to Constable’s oeuvre to have emerged in the last 50 years.”

‘Dedham Vale with the River Stour in Flood’ has been in a private collection since it was bought at auction in 1979.

Before that, it had been in the possession of the Fitzhugh family who had commissioned Constable in the early 19th Century.

Constable’s later works had tended to be purchased either by his friend John
Fisher or by patrons or dealers with metropolitan or international connections.

However, the earlier Suffolk paintings tend to have closer associations with patrons or friends in the local area.

Thomas Fitzhugh is thought to have commissioned the painting as a wedding present for his future wife, Philadelphia Godfrey, the daughter of Peter Godfrey who lived at Old Hall, East Bergholt.

The view is taken from the bottom of her parent’s garden, looking out over the valley with the river in flood, a symbol of fertility, and was intended as a memento of her childhood home for her new married life in London.