The Bank of England announced that the wartime code-breaker will appear on the polymer £50 which is expected to enter circulation by the end of 2021. 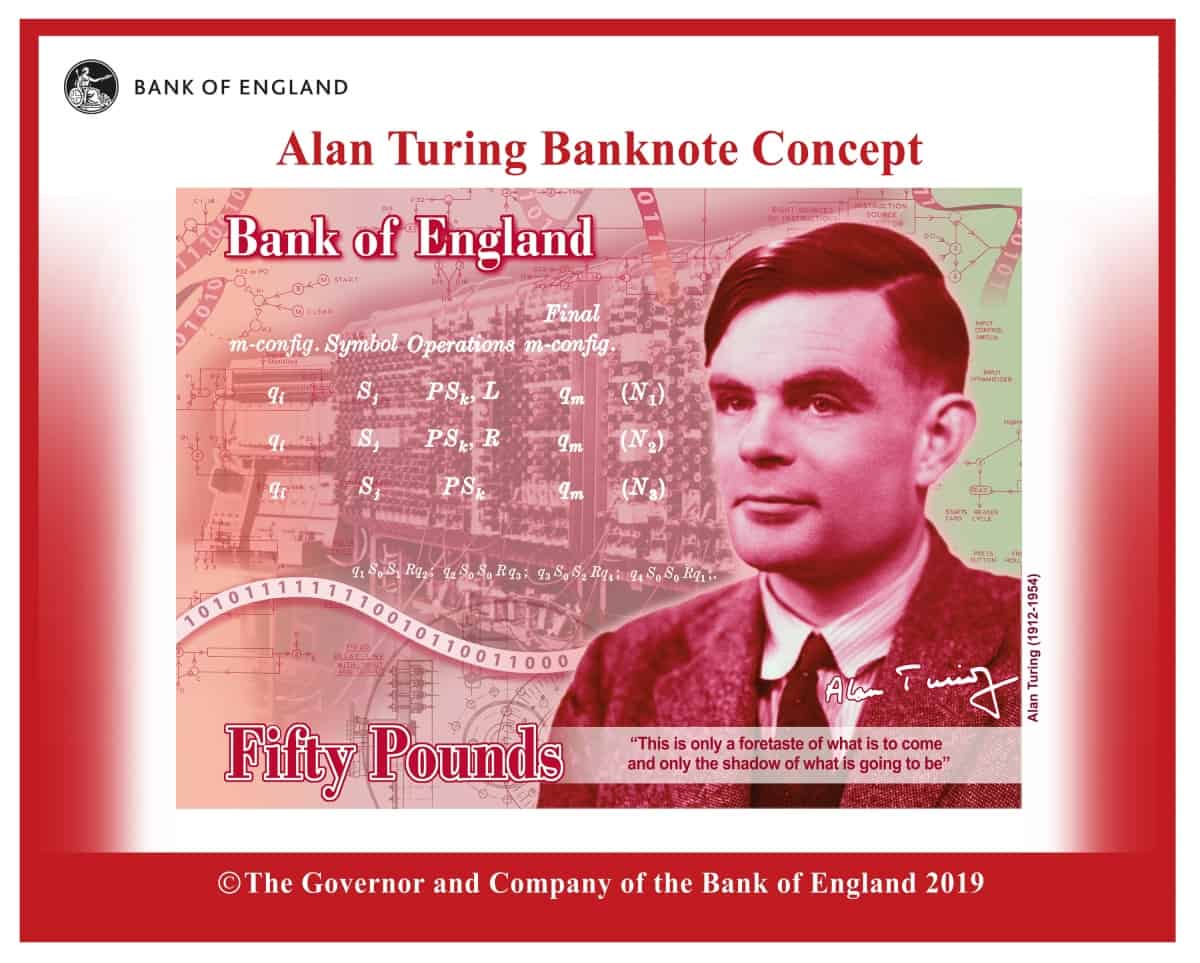 Second World War code-breaker Alan Turing will be the next person to feature on the £50 note, the Bank of England has confirmed.

The selection of the mathematician, who is often credited as being the father of computer science, was announced at the Science and Industry Museum in Manchester.

Bank of England Governor Mark Carney, who made the announcement, also revealed the imagery depicting Turing and his work that will be used for the reverse of the note.

The new polymer £50 note is expected to enter circulation by the end of 2021.

It will feature a quote from Turing, given in an interview to the Times newspaper on June 11 1949: “This is only a foretaste of what is to come, and only the shadow of what is going to be.”

Credited with saving countless lives with the intelligence his code-breaking brought the allies in the Second World War, Turing changed the course of much of the struggle to pre-empt the huge military might of Nazi Germany.

He was persecuted after the war for his homosexuality and it was not until 2013 when he received a posthumous pardon from the Queen.

The Bletchley Park code-breaker, was convicted in 1952 of gross indecency with a 19-year-old man.

He was later chemically castrated and died in 1954 after poisoning himself with cyanide.

Following his pardon, under the “Turing law” – deceased people who were convicted of sexual acts that are no longer deemed criminal received an automatic pardon.

In 2018, the Banknote Character Advisory Committee chose to celebrate the field of science on the £50 note, and members of the public were invited to put forward names over a six-week period.

The Bank received a total of 227,299 nominations, covering 989 eligible figures.

A shortlist was drawn up by the committee, with the Governor making the final decision.

The Bank said the shortlist demonstrated the breadth of scientific achievement in the UK, from astronomy to physics, chemistry to palaeontology and mathematics to biochemistry.

Mr Carney said: “Alan Turing was an outstanding mathematician whose work has had an enormous impact on how we live today.

“As the father of computer science and artificial intelligence, as well as war hero, Alan Turing’s contributions were far-ranging and path-breaking. Turing is a giant on whose shoulders so many now stand.”

While Turing is perhaps best-known for his work devising code-breaking  machines during the Second World War, which was portrayed in a film starring Benedict Cumberbatch, he played a pivotal role in the development of early computers first at the National Physical Laboratory and later at the University of Manchester.

He laid the foundations for work on artificial intelligence by considering the question of whether machines could think.

The new design will feature a photo of Turing taken in 1951, which is part of the Photographs Collection at the National Portrait Gallery.

There will also be a table and mathematical formulae from a 1936 paper by Turing which is widely recognised as being a foundation for computer science.

It sought to establish whether there could be a definitive method by which something could be assessed as provable or not using a universal machine.

The design will also feature technical drawings for the British Bombe – one of the main methods used to break Enigma-enciphered messages during the Second World War.

Turing’s signature from the visitors’ book at Bletchley Park in 1947, where he worked during the war, will also be included, alongside ticker tape depicting Turing’s birth date – June 23 1912 – in binary code.

The concept of a machine fed by binary tape featured in Turing’s 1936 paper.

The current £50 note, which was first issued in 2011, features leading lights of the Industrial Revolution Matthew Boulton and James Watt.

Bank of England Chief Cashier Sarah John said: “The strength of the shortlist is testament to the UK’s incredible scientific contribution.

“The breadth of individuals and achievements reflects the huge range of nominations we received for this note and I would to thank the public for all their suggestions of scientists we could celebrate.”