Shanker Singham an acclaimed financial analyst wrote an op-ed for The Times in which he extolled the virtues of a Brexit vis-à-vis the UK’s trading possibilities with the rest of the world. The rising problems associated with regulation in the global economy are having far-reaching implications on trading activity. The Brexit referendum on June 23, […]

by Sam Allcock
in Economics, Politics 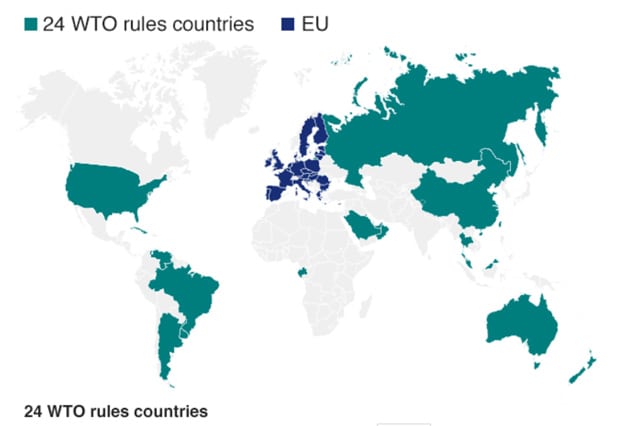 Shanker Singham an acclaimed financial analyst wrote an op-ed for The Times in which he extolled the virtues of a Brexit vis-à-vis the UK’s trading possibilities with the rest of the world. The rising problems associated with regulation in the global economy are having far-reaching implications on trading activity. The Brexit referendum on June 23, 2016 did not precipitate the decline in global economic activity – it was a symptom of it.

The global financial crisis of 2008/2009 was associated with falling industrial output, reduced wealth creation, and rising unemployment. These structural problems served as catalysts to immigration from the EU to the UK. This precipitated rising tension in the UK economy on multiple fronts, notably immigration and border control, a strain on the UK National Health Services, rising ethnocentrism, and deep divisions between the liberal city enclaves in the UK, and the rest of the country.

Could the UK Drop EU Prescription and Adopt WTO Rules with Global Trading?

Anticompetitive legislation may be responsible for driving people into poverty, and destroying wealth creation opportunities. Across the EU, the legal frameworks are increasingly prescriptive and anti-competitive. Today, the United Kingdom trades with many non-EU countries under the WTO (World Trade Organization) rules. Even in the absence of a set of rules and guidelines between the European Union and the United Kingdom, it is possible to hammer out a deal based on WTO guidelines. Presently, the United Kingdom trades with 24 non-EU countries according to WTO rules. These countries include the following: Argentina, Australia, Bahrain, Brazil, Brunei, China, Cuba, Gabon, Hong Kong, Kuwait, Macau, Malaysia, Maldives, New Zealand, Oman, Qatar, Russia, Saudi Arabia, Taiwan, Thailand, Uruguay, Venezuela, the United Arab Emirates, and the United States. This data was furnished by the EC (European Commission).

Wilkins Finance experts believe the UK is fully capable of realizing strong trade agreements with the rest the world, even in the absence of an agreement post-Brexit with the EU. The issue of a hard Brexit or a soft Brexit remains a divisive one among Brexiteers and those against it. As a member of the European Union, the United Kingdom currently has independent trade deals with many other countries. These include Canada, South Korea, and Mexico. The extent of these trade agreements varies from country to country.

If the UK fails in its negotiations with the EU, it would have to reach agreements with countries on a one by one basis. Fortunately, the United Kingdom is one of the world’s most powerful economic forces, and many countries would be eager to hammer out an arrangement with the UK. It’s important to understand the deeper implications of WTO rules. Failing a negotiated settlement between the UK and individual countries, the UK would be subject to taxes on traded goods. These would apply to all UK exports.

The EU and the UK: A Tug-a-War

Currently, the steepest WTO tariffs are levied on cereals and meat at 45% – 50%, followed by processed foods at 20% – 35%, footwear at 10%, clothing at 12%, vehicles at 9%, aircraft at 3%, iron, wood, steel and copper at 2%, and machinery at 2%. Currently, only one country uses WTO trading rules and nothing else. That is Mauritania. However, even so Mauritania has inked a deal with the ECWAS (Economic Community of West African States) which opens up 20 markets to specific rules and regulations. Many folks are concerned about how the United Kingdom will fare without agreements with the European Union, but another question is equally valid: How will the European Union fare without the United Kingdom?