"I think people have really got behind the fact that I started with zero pounds, and no savings, and I’ve climbed up that ladder a picnic bench at a time." 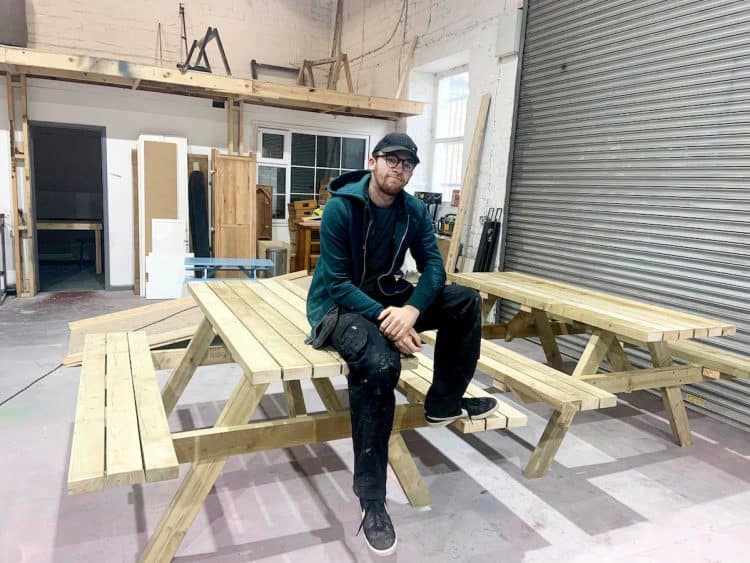 A man who lost his job due to Covid started a new business making benches – and is now earning more than DOUBLE his previous salary.

Jack Tosney, 23, was working as a set builder for theatres before the pandemic hit.

But, when lockdown was enforced, all of his work dried up.

He decided to use his new-found spare time to build a bench for his little sister Charlotte, three, and posted a picture on Facebook.

And, within a week, 60 people had messaged Jack asking him to make garden furniture for their families – and he hasn’t looked back since.

The qualified carpenter, from Leeds, found he could make up to 12 a day and began charging £50 a bench.

He officially registered his new company in January 2021 and now rakes in around £60,000 a year – more than double his previous earnings.

Jack said: “Work just started coming in fast and I never turned it down. I didn’t even pause to think about it.

“I didn’t even really recognise what was happening or make a plan, it kept going uphill and I just stayed with the ride.

“It’s crazy really. I thought I’d ride the Covid wave and then go back to theatre sets, but I just kept going and expanding the business.”

He also worked at top venues including the Bristol Old Vic, and with the Royal Shakespeare Company.

But all of Jack’s work was cancelled in March 2020, so the brother-of-five moved in with his parents and took a temporary job in Tesco.

He then struck upon his business idea, and is now flying as a businessman.

Industrious Jack makes around 150 items in a month, and has hired a workshop and a freelance painter to keep up with demand.

He began selling larger versions when pubs reopened in June 2020, but has since diversified to include bespoke pieces such as an old-fashioned shop counters.

Jack his also up for Businessman of the Year at the Yorkshire Choice Awards – after customers nominated him.

He said: “I was buzzing. It’s pretty humbling to have been nominated by so many members of the public, that’s a lovely feeling.

“I think people have really got behind the fact that I started with zero pounds, and no savings, and I’ve climbed up that ladder a picnic bench at a time.”

The Yorkshire Choice Awards are designed to recognise and raise awareness of local people and independent businesses that are considered inspirational.

Members of the public can vote for Jack and other nominees via the Yorkshire Choice Awards website for the final on May 6.

He said: “It’s a lovely thought that people saw this award and thought of me, and then that they took the time to email and nominate me.

“I think people like a story like this to support, plus we’ve all become more appreciative of sitting outside.”

Related: Why women are turning to entrepreneurship