Those that spend a fair amount of their time in the capital will know that the roads are usually filled with black cabs and buses, but from time to time you will be lucky enough to catch a glimpse of a breathtaking supercar. People tend to be in a rush in London, but when one […] 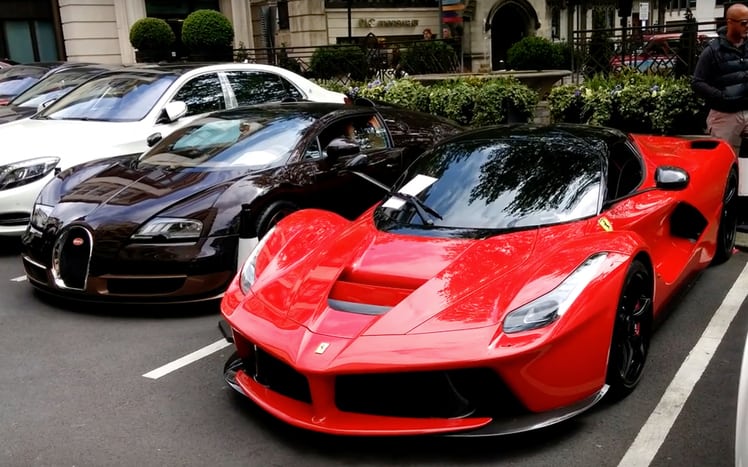 Those that spend a fair amount of their time in the capital will know that the roads are usually filled with black cabs and buses, but from time to time you will be lucky enough to catch a glimpse of a breathtaking supercar. People tend to be in a rush in London, but when one of these luxurious automobiles is on the roads it is impossible to ignore.

These supercars could be seen more often because many of the richest people in the world live in and around London and will continue to drive here despite the charge. Additionally, the global elite come on holiday to enjoy the city of London and will often bring their supercars with them.

Where to Spot Supercars

As you would expect, sightings of these breathtaking cars are restricted to wealthier areas of the capital. Here are a few places that you might spot a supercar (and possibly a celebrity owner).

Harrods, Knightsbridge – Luxury department store Harrods in Knightsbridge is a playground for the rich and famous and where many come to spend their wealth on clothing, homeware, electronics, food and much, much more. As a result, you will often see brands like Bentley, Lamborghini and Rolls Royce in the area.

Mayfair – Mayfair is famously one of the wealthiest areas in the capital (and the most expensive on the Monopoly board!). As a result, you can expect to find plenty of supercars and rich owners in this area bordering Hyde Park. In addition to the beautiful Georgian townhouses and luxury hotels, Mayfair is filled with gourmet restaurants, modern art galleries and fashion designers.

Belgravia – Belgravia is another wealthy district close to Hyde Park, Buckingham Palace Gardens and Chelsea. It is somewhere that the global elite comes for the posh hotels, fine dining, luxury shopping and culture. The area also has many elegant townhouses whose residents are proud owners of head-turning supercars.

Thanks to these upmarket areas of London (amongst a few others), owners of supercars are easily able to drive and park in the capital. Their deep pockets ensure that the congestion and T-Charge is not an issue, and most will happily drive their cars in and around central London. You will usually only see the cars in these areas, but occasionally you may see them travelling across the city and this is when people will stop and take notice. Looking at the wonderful variations of their private number plates is especially fun.

In addition to this, it is not just the global elite that are driving supercars. Luxury car dealerships like Romans International sell these automobiles second-hand which can make them much more affordable and especially brands like Audi, BMW and Mercedes which are not quite as prestigious as Bentley, Aston Martin etc. As a result, supercars are also driven by successful business people in the capital and you may find these in the business districts of London.

As the capital of England and one of the most glamorous destinations in the world, London is somewhere that the rich, famous and global elite both live and visit. This is evident with the stunning supercars that you will sometimes see and especially when you visit the wealthier parts of London. The Government attempt to deter motorists from driving in the capital with various charges, but these do not stop those with deep pockets from driving their luxury automobiles in the city.