#1. Oh, hello, I didn’t see you there… Greetings, dear reader. My name is Steve McNeil and I’m lucky enough to have been asked to write things about the gaming industry for the marvellous London Economic. Each Friday, I’ll be beaming my brain-thoughts into your eyeholes via the internet, based on whatever I’ve been up […]

by Simon Longden
in Gaming, Tech and Auto 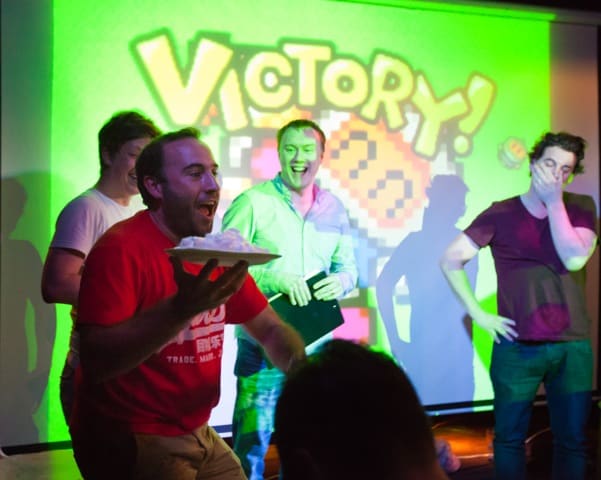 Greetings, dear reader. My name is Steve McNeil and I’m lucky enough to have been asked to write things about the gaming industry for the marvellous London Economic. Each Friday, I’ll be beaming my brain-thoughts into your eyeholes via the internet, based on whatever I’ve been up to that week.

As this is the first article, I’ll begin with a bit of background biography guff so you can quickly judge me and decide if I’m worthy of distracting you from your day job for a few minutes each week (spoiler: I’m not).

Since 2009 I’ve been in a comedy double act with Sam Pamphilon. We’ve popped up on various TV and radio things over the years, but our main focus these days is our live videogaming/comedy show, Go 8-Bit, where we get comedians to battle on classics such as Mario Kart and Street Fighter. If they lose, we do horrific forfeits, like trying to play Snake on an old Nokia whilst wearing a 14-foot albino python.

In the last year, we’ve had our own stage at Eurogamer’s EGX at Earls’ Court, an appearance on the BBC’s Royal Institution Christmas Lectures which led to the development of a second live show, WiFi Wars, and the show’s now in development for TV. If you’d like to come along, we’d love to see you there – dates are on our website.

Off the back of all that, I’ve had the opportunity to do more and more videogaming/comedy stuff. I regularly work for Ginx TV as a reviewer and features writer and also appear on some of their shows, like Ginx Live, Console Yourself and Challenge TV’s Videogame Nation.

But enough about all that. “What have you been up to this week, Steve?” asked literally no-one, ever. Well, dear reader, this week I was at a wonderful place in Dalston that some of you may not have heard of, but that all of you should visit, Loading Bar.

Loading Bar has been running in various guises, and venues, since 2010, beginning life all the way down in Falmouth, Cornwall. Most recently, it’s found its stride by providing draught beer, gaming-based cocktails and piles of videogames to its attractive clientele at its new home in London, at 97 Stoke Newington Road, Dalston.

Importantly, whilst this place might sound like a living nightmare for anyone who doesn’t own a console, Jimmy, the venue’s owner has always ensured that “if you aren’t that into games you can still come down, grab a beer and be none the wiser”, which is one of the reasons they’ve avoided putting screens absolutely everywhere or organizing more niche events such as e-sports. It’s the sort of place you could take a ‘normal’ person without worrying that they’ll be confronted with a horde of drunken cosplay orcs, or the unmistakeable odour of unshowered boy that you might expect to find at certain other gaming establishments.

To help engage with the community, Loading Bar are now also regularly streaming a mixture of gameplay and chat via twitch.tv, allowing people outside of London to get a taste of the venue’s vibe, although sadly not the contents of their bar. We simply don’t have the technology yet.

One regular host of their streams is the handsome adonis (citation needed: ED.), Chris Slight. Games reviewer for Sky News and community “man” for Ginx Live, each week Chris convinces people from the games industry to pop along and shoot the breeze in exchange for free booze and the chance to spend time near his aura. In the interests of full disclosure, I regularly stream with Chris as a sort of warming-up exercise for our other shows, via the twitch channel Two More White Guys, so I have a vested interest in making him sound good. Thankfully though, he actually is, as you can see if you check out his work online.

Regardless of whether or not the idea of watching people discussing sex in car parks whilst playing zombie games appeals to you, if you live in London, or are ever in town, it’s definitely worth taking a trip to Loading Bar. If you do, make sure to tell them that Steve McNeil sent you. It won’t help, but if enough people do it when they go to gaming things, it might help me to create the illusion of legitimacy.