One of the world’s most environmentally-friendly cars arrived in the UK today – to help clean up London’s most polluted streets. Research from University College London (UCL) identified the capital’s dirtiest roads – which contain high levels of pollutants including Nitrogen Oxide (NO2) and Particulate Matter (PM). They did this by analysing heat maps which […] 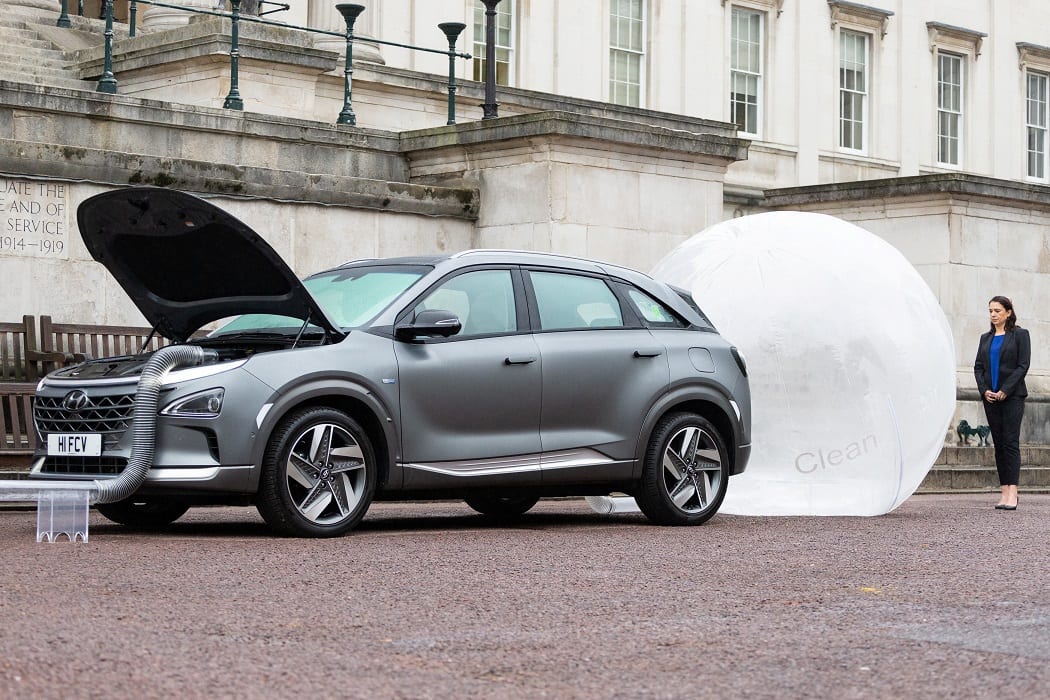 One of the world’s most environmentally-friendly cars arrived in the UK today – to help clean up London’s most polluted streets.

They did this by analysing heat maps which showed the mean levels of PM and NO2 levels throughout London.

Now the university has teamed-up with Hyundai to highlight the levels of pollution.

Hyundai’s new fuel cell car, the NEXO, toured the route to show how its air purification system filters and cleans the air.

Researchers from UCL began by pumping dirty pollutants from a balloon into the vehicle.

The amount of air which passed through the car was equivalent to the total amount of air a typical adult would breathe over 100 years.

The dirty particles were then filtered out through the car’s filtration system – which removed 99.9 per cent of the pollutants – and emitted into the second balloon.

Sylvie Childs, Hyundai’s senior product manager for NEXO said: “We are all concerned about air quality and what affects it.

“At Hyundai, we are committed to improving the efficiency and environmental performance of all our vehicles and have been investing billions in bringing a full range of low and zero emission vehicles to the market place.

“We believe that the availability of alternatives, like the NEXO fuel cell electric vehicle, will bring the UK closer to its zero emissions future.”

“However, the responsibility for this cannot only rest with us, the manufacturer.

“We need the government to invest equally in incentives and infrastructure that would enable Brits to have better choices when it comes to the car they drive and how it can fit into their lives.”

The vehicle’s air purification system filters 99.9 per cent of very fine dust (PM2.5) and shows the exact amount of air purified on the display panel in the car each time you drive.

When driven for one hour, 26.9 kilograms of air is purified – the same amount 42 adults breathe in an hour.

According to the car manufacturer, if 10,000 fuel cell cars were on the road it would reduce the carbon reduction effect equivalent to planting 60,000 trees.

“Our research into fuel cell technology has found it to be a promising transport solution to consider as an alternative to fossil fuel dependent cars and battery electric vehicles which have long charging times.

“Going forward, we’re building an advanced propulsion facility where we will develop and evaluate hybrid, battery and fuel cell powertrains for automotive applications.”

As part of Clean Driving campaign, Hyundai is giving Londoners the chance to clean up their streets with ‘NEXO Neighbourhoods’.

They can register their interest to test drive the brand-new NEXO here: https://www.hyundai.co.uk/new-cars/nexo