An educated vandal has attacked a new £1.25m houses in one of Britain’s top university cities – with graffiti in LATIN. The protestor made his mark in an apparent objection at the lack of affordable new for locals in Cambridge, one of the UK’s property hotspots. He daubed ‘locus in domos loci populum’ – in […] 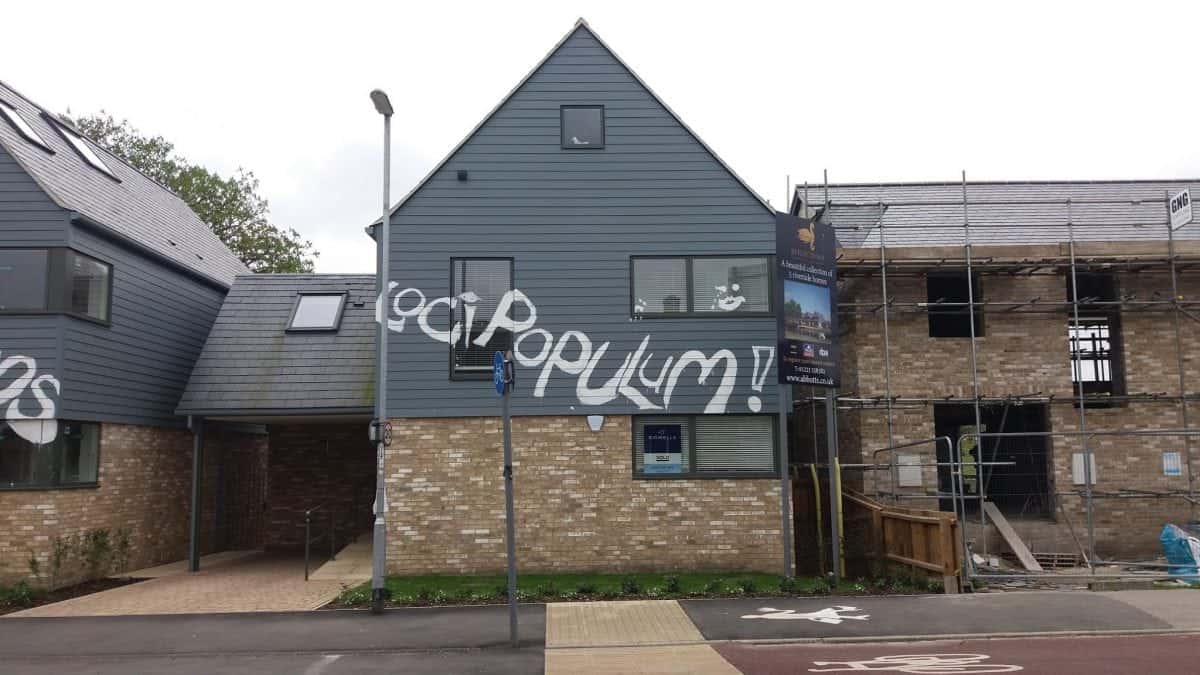 The latin graffiti on the houses in Chesterton, Cambridge. See Masons copy MNLATIN: An educated vandal has attacked a new £1.25m houses in one of Britain's top university cities - with graffiti in LATIN. The protestor made his mark in an apparent objection at the lack of affordable new for locals in Cambridge, one of the UK's property hotspots. He daubed 'locus in domos loci populum' - in large white letters on four newly-built detached homes - which roughly means 'Local homes for local people'.

An educated vandal has attacked a new £1.25m houses in one of Britain’s top university cities – with graffiti in LATIN.

The protestor made his mark in an apparent objection at the lack of affordable new for locals in Cambridge, one of the UK’s property hotspots.

An estate agents’ For Sale sign outside one of the waterside houses, which have private moorings on the River Cam, was also daubed with ‘LOCAL LIVES’.

Police are investigating the overnight vandalism on the brand new homes on the prestigious Reflections development in the Cambridge suburb of Chesteron.

Yesterday the city’s residents said they believed a disgruntled local academic was most likely responsible for the high-brow graffiti.

Others took to Twitter to poke fun at the posh protest. One user tweeted: “Is Latin graffiti the most Cambridge thing to happen ever?”

A 71-year-old retired biochemist who lives in the city but asked not to be named, said: “The sentiment is perfectly correct but the act of execution is not what you want to see about.

“I would be very surprised if it wasn’t done by a Cambridge-educated activist.

“I could think of a few people in Cambridge who would have both the knowledge of Latin and the sentiments and the will to do it.”

The resident added: “I think if you go in the pub toilets in Cambridge you will find Latin sentiments as well.

“This was clearly done by somebody with a bit of thought.

“When you think how few riverside sights there are in Cambridge this was an immensely important site.”

The graffiti artist was believed to have supported the huge backlash against building the £1.25m two-storey homes by the River Cam.

Residents were dismayed when a popular pub called the Penny Ferry, formerly the Pike and Eel, was sold by Greene King.

The grey wood-panel housing has been branded an “eyesore” by residents left bitter after their pub was demolished about eight years ago.

The resident added: “The feeling of the community is that Greene King cashed in up their investments and sold it for development. Dr Charles Weiss, from Cambridge University’s Faculty of Classics translated the slogan as ‘a place for homes equals places for people’.

He believes it might be ‘pidgin Latin‘, a modern take on the ancient language.

Ms Champion, who has lived in the city for 10 years said: “The graffiti reflects a mood in the area about that particular development.

“They are just massive houses and no one locally would be able to afford them.”

Retired professor Ginny Morrow, of Water Street, said: “We lobbied and lobbied to stop it being sold for development and to preserve it and it’s in a conservation area.”

Confirming she wasn’t the graffiti artist, she said: “It’s my sentiments exactly but my Latin isn’t good enough.”

The five homes are grey fronted super modern properties with their own separate parking spot or ‘car port’ alongside the pristine builds.

The homes are equipped with balconies as well as en-suite bathrooms spread over three storeys.

There are five homes set to be sold on the exclusive plot.

At the back of the houses there are gardens and unobstructed river views.

They are described by the firm marketing them as being “built to an extremely high specification with river frontage, mooring and outstanding southern views.”

Mary Beard, Professor of Classics at Cambridge’s Newham College, was among those whose attention was drawn to the graffiti.

She added: “This is a bit hard to translate, but I think what they’re trying to say is that a lovely place has been turned into houses.”

Property prices have exploded in the university city in the last five years with average price of a home last year being £421,000.

Last year Cambridge was voted the best city in the UK to work in by Glassdoor and its prestigious university is rated second in Britain and fourth worldwide.

A spokesman for Cambridgeshire Police has confirmed they were called to the report of criminal damage involving four properties at 8am this morning.