The Royal Navy’s carrier strike group is sailing through the disputed waters, earning a stinging rebuke from Beijing. 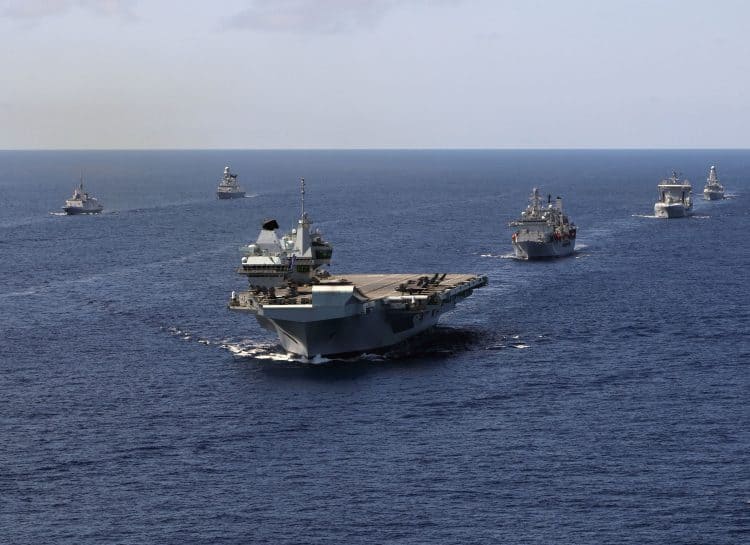 China has threatened stern action against the Royal Navy if it does not “remain restrained and obey the rules” as it sails through the South China Sea.

Defence Secretary Ben Wallace set the scene earlier this month for a confrontation with Beijing when he said the deployment led by the flagship HMS Queen Elizabeth would sail on any route defined as legitimate under international law.

China claims the South China Sea despite an international court ruling in 2016 that it did not belong to the nation, which has grown increasingly assertive as it builds military bases and airport runways on constructed islands in the disputed waters.

An editorial in the state-run newspaper Global Times said the Royal Navy entered the sea on Sunday as part of the “UK’s effort to show its presence in the region”.

“We seriously warn this group: They are obliged to remain restrained and obey the rules. Please follow the current international shipping lanes and stay at least 12 nautical miles away from the Chinese islands and reefs,” the editorial said.

Wallace had declined to say whether the fleet would breach China’s 12 mile zone. “It’s no secret that China shadows and challenges ships transiting international waters on very legitimate routes,” he told The Times on 20 July.

“We will respect China and we hope that China respects us … we will sail where international law allows.”

In a warning it said was being issued to the UK, Australia and Japan, the Global Times editorial stated: “We advise US allies to be particularly cautious, keep a sufficient distance from China’s red lines, and refrain from pushing ahead.

“They must be bluntly told that if their warships rampantly behave as the US military does in the South China Sea, they will more likely become an example of China defending its sovereignty and territorial integrity – just as a popular Chinese phrase indicates: To execute one as a warning to a hundred.”

It also said the “very idea of a British presence in the South China Sea is dangerous”.

“If London tries to establish a military presence in the region with geopolitical significance, it will only disrupt the status quo in the region,” it said.

“And the UK simply does not have the ability to reshape the pattern in the South China Sea. To be precise, if the UK wants to play the role of bullying China in the region, it is demeaning itself. And if there is any real action against China, it is looking for a defeat.”

The tensions come after Foreign Secretary Dominic Raab said there was a global “battle for hearts and minds” to attempt to reduce China’s influence on international organisations.

Speaking in the Commons on July 6, Raab said he was “very familiar with the routing” of the Navy’s deployment and had discussed the deployment with his Chinese counterpart, insisting it was being done in a “confident but not confrontational” way.