The prime minister was reportedly delighted when the takeover appeared to be back on track. 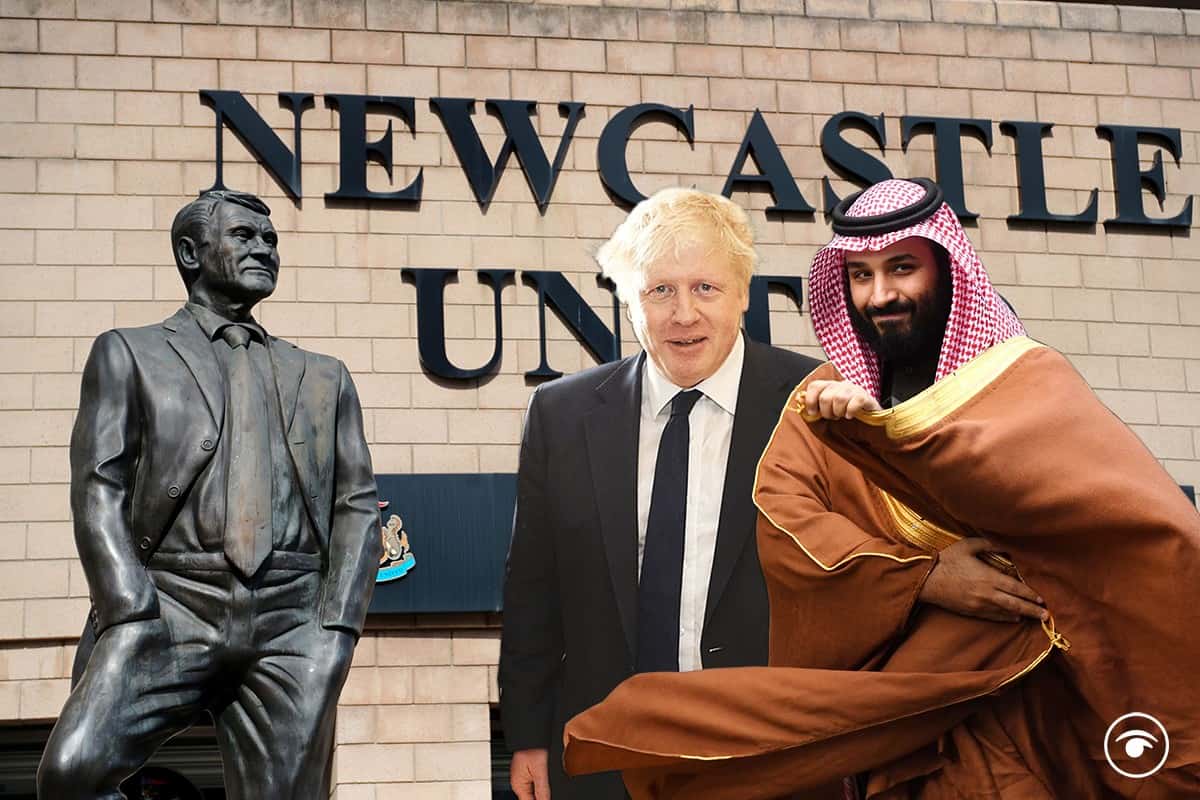 Boris Johnson’s claim that he had no involvement in discussions over the potential takeover of Newcastle United by a Saudi consortium has come under scrutiny, after it emerged he exclaimed “brilliant!” when told the deal was set to go ahead.

The prime minister’s jubilant response was to a Downing Street aide who he had asked to intervene, after Saudi Crown Prince Mohammad Bin Salman warned that the Premier League’s blocking of the takeover would put UK-Saudi relations at risk.

According to the Daily Mail, Johnson was enthusiastic when told by Downing Street strategist Eddie Lister that the Newcastle deal may have been rescued.

Johnson contacted Lord Lister last September to ask about efforts to revive the deal, which had been blocked by the Premier League two months previously following vocal human rights protests, led by the widow of murdered journalist Jamal Khashoggi.

“Any news from Saudi?” the prime minister asked Lord Lister on 7 September, a source told the Mail. Lister told him: “A call is being set up. The Newcastle deal will hopefully be signed this week.” Johnson replied: ‘Brilliant.’

It also emerged that MBS, as the crown prince is known, was furious at the blocking of the Newcastle takeover – and threatened the UK economy with reprisals.

“The kingdom of Saudi Arabia has opened its doors for the UK’s investments in various sectors and initiated a mutually beneficial investment program with large amounts of funding,” he told Johnson in June last year. “The EPL’s wrong conclusion will unfortunately have a negative impact on both our countries economic and commercial relations.”

After Johnson informed Lord Lister of the crown prince’s anger, his strategist said “Tell MBS that I am investigating on your behalf.”

Downing Street has insisted that Johnson did not intervene in the takeover saga, amid reports he was asked to by MBS.

An earlier Daily Mail report claimed Bin Salman, chairman of the Middle East state’s Public Investment Fund, the 80 per cent majority partner in a consortium which agreed a deal to buy the club in April last year, urged the British government to help remove stumbling blocks in the £300million-plus sale, which collapsed in July.

However, the prime minister’s official spokesman denied he had done so and said he had asked long-standing aide Lord Lister to simply check on the progress of the talks.

The spokesman told reporters: “This was a commercial matter for the parties concerned and the government was not involved at any point in the takeover talks on the sale.”

Pressed on whether Johnson played any part, the No 10 official replied: “No, the prime minister didn’t intervene. The government was not involved at any point in the takeover talks.”

Asked whether media reports on the matter were wrong, the spokesman added: “The prime minister asked Lord Lister to check on the progress of the talks as a potential major foreign investment in the UK. He didn’t ask him to intervene.”

Kate Allen, the UK director of human rights organisation Amnesty International, said in a statement that the Mail report illustrated the takeover was “always more than just a commercial transaction” and that in reality it was an attempt by the Middle East state to “sportswash” its reputation.

Allen said: “The bid to buy Newcastle was a blatant example of Saudi sportswashing, so it’s worrying that the prime minister would accede in any way to pressure from the crown prince over the deal.

“Reports that Mohammed Bin Salman made threats about possible damage to UK-Saudi relations if the deal didn’t go ahead only illustrates that this was always more than just a commercial transaction within the football world.

“At the time that the crown prince was putting this pressure on No 10, the world was still reeling from the fall-out over Jamal Khashoggi’s murder, Saudi human rights activists like Loujain Al Hathloul were languishing in jail, and Saudi warplanes were indiscriminately bombing Yemen.

“This whole tangled affair only underlines how there needs to be a proper overhaul of the Premier League’s owners’ and directors’ test to provide proper human rights scrutiny of who is trying to buy into the glamour and prestige of English football.”