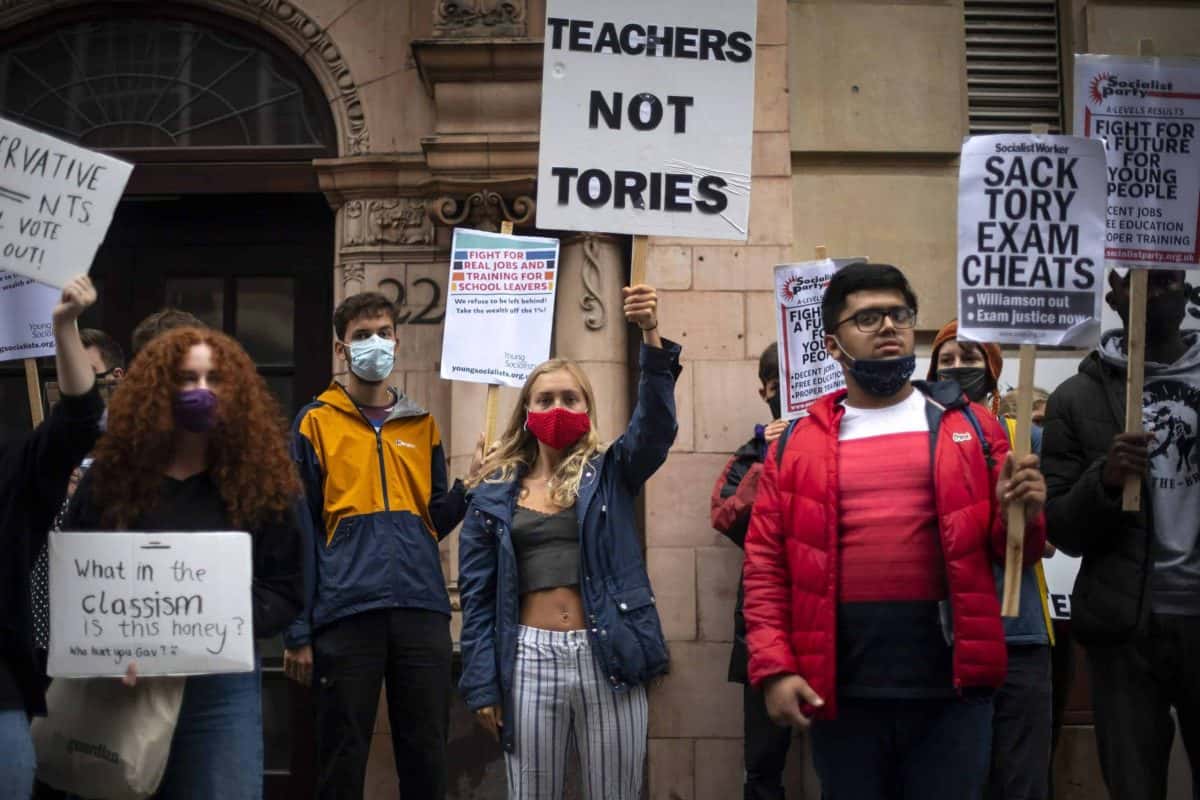 A-level students who feel let down by a “ridiculous and insane” marking system are launching legal action against England’s exam regulator Ofqual.

Thousands of teenagers were left angered after almost 40% of predicted grades were downgraded by the regulator’s “moderation” algorithm, leaving many missing out on their first-choice universities.

His crowdfunding page has amassed more than £15,000 in donations in less than two days and he is being represented by a legal team with lawyers from Leigh Day and Foxglove.

“The Government is playing politics with our futures,” the 18-year-old from Ealing, west London, told PA news agency.

“Whatever happens this is going to affect thousands of students.”

In a 22-page letter to Ofqual, Mr Parfitt-Ford’s legal team described the model used to determine grades as “irrational, arbitrary, fails to take account of relevant considerations” and claimed it was unlawful.

On Saturday, just hours after it published its criteria for appeals based on mock exam results, Ofqual said the policy was “being reviewed” by its board and that further information would be released “in due course”.

This latest turn of events has been met with confusion and dismay among students and families.

Mr Parfitt-Ford described the now-suspended appeals process as “ridiculous and insane”, but said he was glad that it was being reviewed.

“I wish they did it before releasing the policy in the first place,” he added.

“We are desperately trying to get clarity, with GCSE results due we fear this could potentially become even more chaotic, we are desperately hoping the Government will make a U-turn by then.

“We are not going to stand by and watch as potentially millions of GCSE students’ futures are affected by this.”

Meanwhile, the Good Law Project is supporting six students over a judicial review of Ofqual’s “failings”.

Data from Ofqual shows independent schools saw an increase of 4.7% in the number of students securing A or A* grades from 2019, compared to 2% for state schools and just 0.3 percentage points for further education colleges.

One of the students taking legal action, whose name was given as Michael, saw his grades fall from a predicted BBB to EEE, which left him “disheartened”.

Michael said: “Teachers are entrusted with the task of predicting students’ grades and considering they are in a far better position to determine what level students are working at, it is abysmal to think that the Government, whose job it is to lead this country in the right direction, has allowed an algorithm to determine the futures of thousands of students.

“This injustice cannot and should not stand, and we are urging the Government to rethink this decision.”

Dan Rosenberg, an education lawyer at Simpson Millar, who is representing several A-level students, said: “We have been overwhelmed by enquiries from others in a similar position.

“All of them speak of the emotional distress and uncertainty that this has caused.

“We would urge the Government to act quickly to resolve this matter and to make sure that those who are still awaiting their GCSE results later this week do not have to suffer in the same way.”

Jolyon Maugham, director of the Good Law Project, said: “If you don’t go to a successful school you don’t deserve to succeed either – strip away all the science and that’s what’s delivered by the system Ofqual and Gavin Williamson have put in place.

“It’s not fair, it’s not good enough and hard-working students should not have to stand for it.”