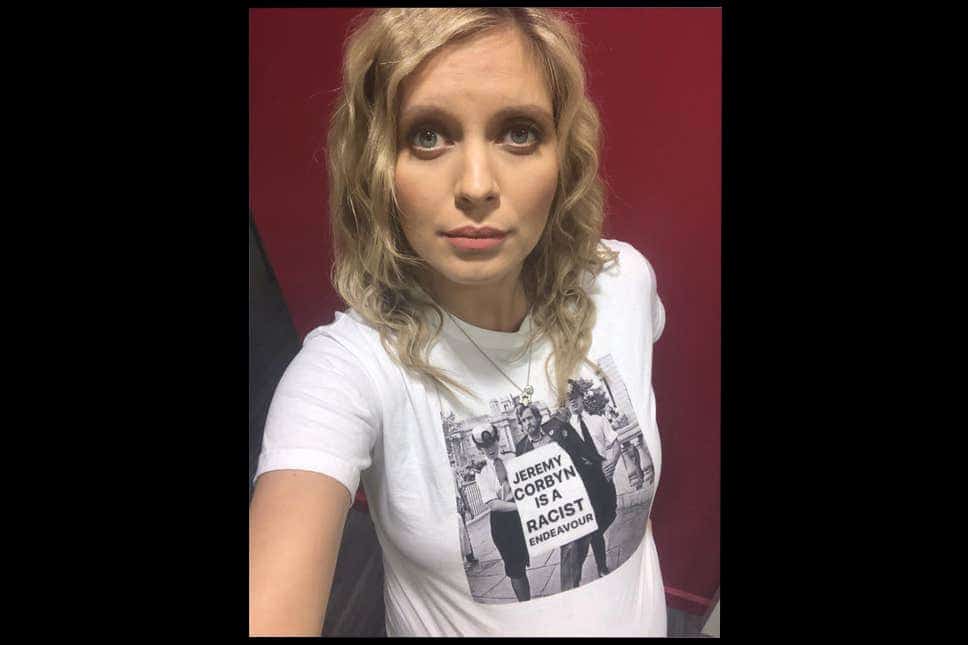 TV presenter Rachel Riley has sparked controversy after she posted a picture wearing a photoshopped t-shirt of Jeremy Corbyn at an apartheid rally.

The Countdown presenter defended her decision to wear a t-shirt featuring a doctored photo of the Labour leader, saying she has “no qualms” about “highlighting” the Labour leader’s “racism”.

The photo depicts Mr Corbyn carrying a poster which has been changed to read: “Jeremy Corbyn is a racist endeavour.”

The original photo, taken in 1984, captures the moment the Labour leader was arrested while protesting the South African apartheid.

The real message at the time read: “Defend the right to protest against apartheid. Join this picket” – has been replaced on Ms Riley’s top.

Sharing a photo of herself, she wrote on Twitter: “I didn’t feel comfortable knowing my workplace was to be full of racists tonight. I don’t endorse Boris, but I do endorse #NeverCorbyn.

“Please see my pinned thread if you still don’t understand why. #LeadersDebate #LabourAntisemitism.”

The move has been condemned on social media, with people calling the stunt a “total disgrace”.

It also seems to overlook the fact that his opponent, Prime Minister Johnson, has repeatedly been called out for using racial slurs.

He also compared Muslim women to “letterboxes”, although that seems to have evaded the gaze of Riley and her photo editors.