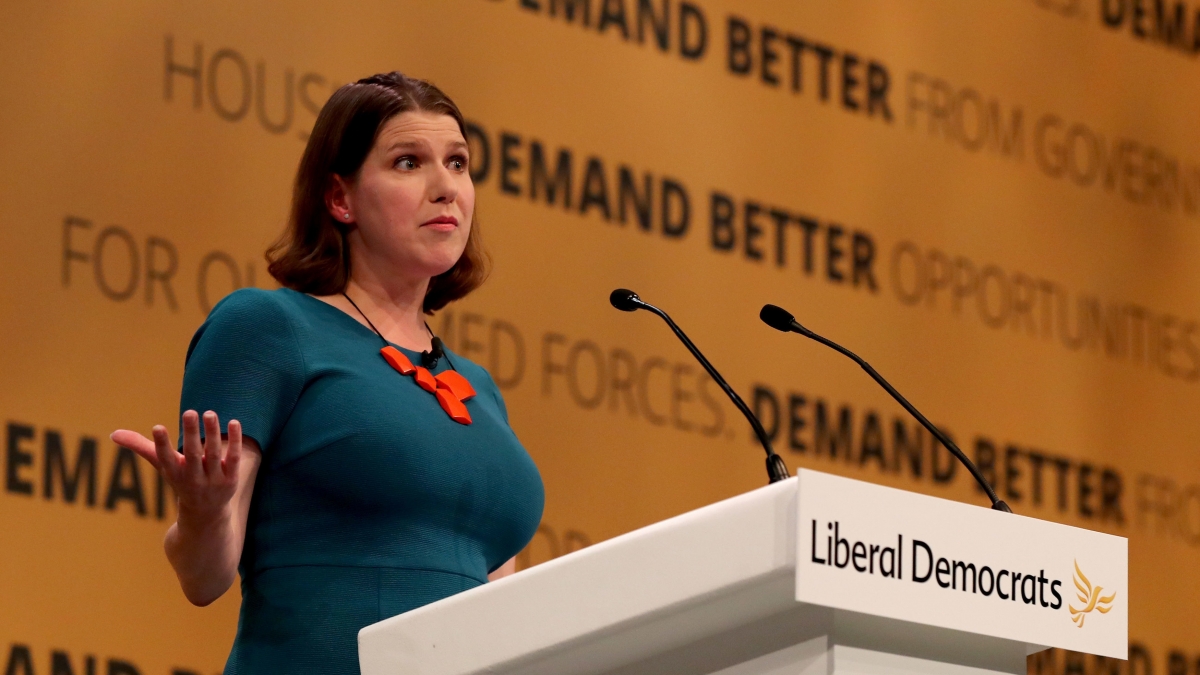 Liberal Democrat leadership contender Jo Swinson has said she would not rule out a future deal with the Conservatives or Labour.

The Lib Dem deputy leader, who is running against Sir Ed Davey to succeed Sir Vince Cable in the party’s top job, said there is no immediate prospect of becoming allied with either the Tories and Labour currently as both are “led by Brexiters”.

In a interview with The Herald newspaper, she said: “I have not said never in any future scenario, where things are different.

“I’m looking at the situation right now in terms of being led by Brexiters on both sides.

“The same holds for confidence and supply. We need to stop Brexit and work with people who agree with us on that, and that’s not the leadership of the Conservatives or the Labour Party.”

Asked who they would support between Boris’ Conservatives, Corbyn’s Labour or the @LibDems led by me, the public choose the @LibDems.

As leader I’ll build the alliance we need to stop #Brexit and fight back against those who want to divide our country. #JoinJo. pic.twitter.com/sZs34XQwpO

On the Sophy Ridge Show on Sky News on the weekend, Swinson insisted:

“We could be better than kingmakers, there was a poll out yesterday that said we could actually, in one scenario, win that election with 30% of the vote.”

When asked whether she thinks she could become prime minister in the event of a general election, Ms Swinson said: “Yes. I think our politics are volatile at the moment, I think predictions are a bit of a mug’s game in politics.

“I do not put any limit on our ambitions for the Liberal Democrats because our country needs a liberal alternative.”

Ms Swinson also said that she is hopeful that there will be further MP defections to the Lib Dems, following Chuka Umunna’s move from Change UK.

“But I think in order for people to be able to talk frankly about what is a difficult step if somebody’s thinking about joining a new political party, then those need to be able to be kept private.”

The Lib Dem leadership hopeful also said that she would be “open minded” about working with other parties.

She said: “Of course in some of the challenges that we face, we need to work with others to achieve it.

“The campaign for a People’s Vote is a great example.

“Liberal Democrats have been leading the way on that particular issue, but we’ve also been working with others cross-party to deliver that goal and I think it’s important that we continue to do that.”

On the question of whether the party would consider not standing candidates for certain seats in order to ensure that pro-remain candidates are elected, Ms Swinson said that the party should remain open to the possibility of doing so.

“I think we have to be open minded to that, particularly given the threats that our country faces,” said Ms Swinson.

“This is about what is the right thing for our country and if you look at what is on offer from Boris Johnson, whether he ends up doing some kind of deal with Nigel Farage, that places our country in serious threat.

Ms Swinson, who would become the first female leader of the Lib Dems if she wins the leadership race, believes the party has its best chance to fundamentally change British politics.

“We have had in our history of the Liberal Democrats and predecessor parties, various points at which it has been tantalising close to totally breaking the mould of British politics; during the 1980s,” she said.

“We have an even better opportunity now and that’s what we absolutely do need to grab hold of.”

The 39-year-old said this is “ambitious” and she does not “underestimate” the challenge of the Lib Dems needing to boost their 12 MPs by 300 to form the next government.

In the wide-ranging interview, Ms Swinson also addressed the issue of Scottish independence, claiming the SNP does not have a mandate for a second independence referendum as the 2014 ballot, based on the nationalists’ vision outlined in the white paper Scotland’s Future, was rejected.

Her leadership rival claimed the “SNP is not either for the Scottish people or the United Kingdom”.

“That’s why we believe that the SNP is not good either for the Scottish people or for the United Kingdom, and we believe Britain should stay in the EU.”

Questioned if his leadership prospects have been damaged by his prominent role in the Conservative-Liberal Democrat coalition, during which he was Energy Secretary, the Kingston and Surbiton MP said this was not the case.

He said: “No, because I fought the Tories day in, day out.