"We can now say the decision taken in 1975 by this country to join the Common Market has been reversed by this referendum to leave the EU." 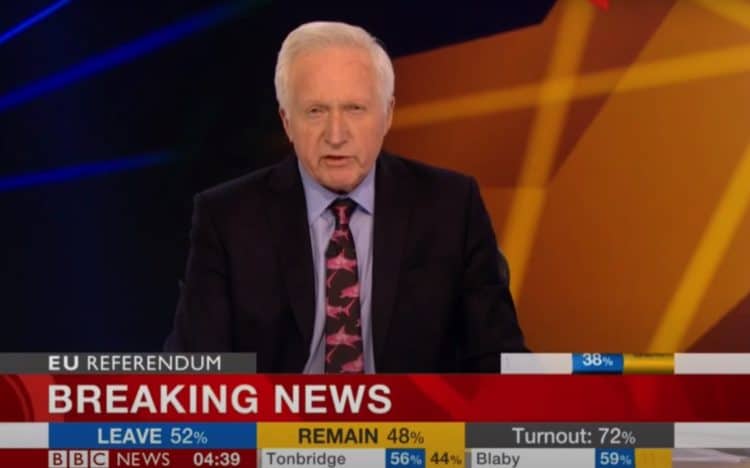 David Dimbleby has recalled the moment he announced the Brexit referendum result during an interview with LBC’s James O’Brien.

The former BBC broadcaster anchored late-night news coverage of the event in 2016, eventually announcing the result just before 5am in the morning.

Speaking to O’Brien, he said the Beeb had been reluctant to call a win for Leave until they were absolutely sure there could be no other outcome.

The writing had been on the wall for the Remain side from early in the night when Sunderland voted out by a majority of 61 per cent.

According to subsequent reports, the local result sent shivers down the spine of the western world, with Lindsay Lohan taking to Twitter to ask ‘Where’s Sunderland?’, the pound plummeting and the New York Times sending a reporter to Wearside.

Dimbleby told O’Brien that he had scribbled down what he was going to say only moments before the cameras panned to him.

With a deadbeat look on his face, the veteran broadcaster called the result, saying:

“We can now say the decision taken in 1975 by this country to join the Common Market has been reversed by this referendum to leave the EU.”

Here’s how he recalls the moment six years on:

Related: Consumers ‘at risk’ due to post-Brexit regulatory system