The former first minister of Scotland denies all charges against him. 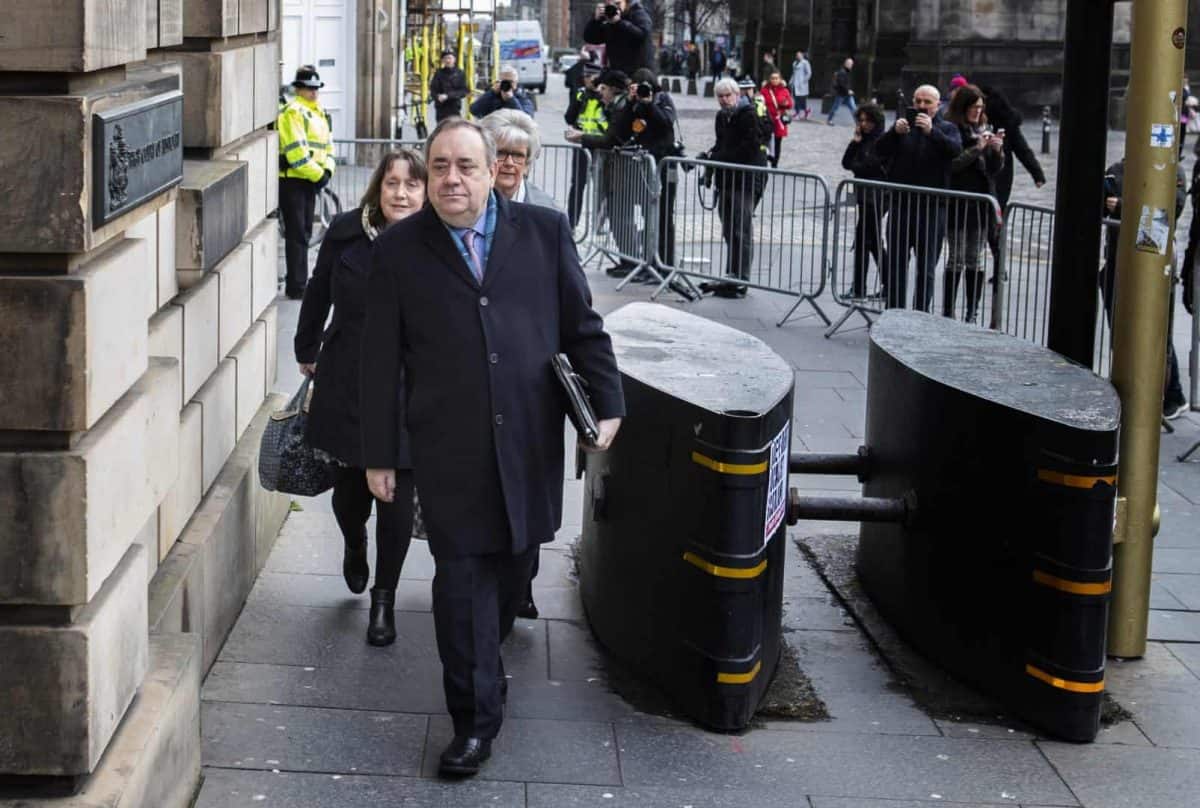 Alex Salmond impersonated a zombie before sexually assaulting an SNP worker, a jury has been told.

The alleged incident is said to have happened one evening at Bute House in Edinburgh in September 2014 – the month of the Scottish independence referendum.

Salmond faces 14 charges of alleged offences against 10 women, all of which he denies.

It was heard the former first minister of Scotland was working on a high-pressure situation while on the floor facing the complainer, known as Woman J.

She told the High Court in Edinburgh on Friday the 65-year-old then told her to stand up as he did and asked her if she had seen “that zombie movie where they do this”.

Woman J said: “He just took a couple of steps with his arms outstretched.

The court heard she managed to break free from the accused, who she said then acted like “nothing had happened”.

She added: “I remember thinking that I was glad that his reaction wasn’t angry.”

Shelagh McCall QC, representing Salmond, put it to the witness that the incident never took place, which she denied.

The woman said she was in “complete shock” after the incident and had felt scared.

She told the court: “I was in complete shock, I didn’t really understand what was happening.”

Asked if she was frightened, she said “yes”.

The party worker also told jurors the pair went into his study to do some work where she complained it was cold.

She claimed the former first minister then told her she should be wearing tights, to which she replied she was.

It was heard he then briefly touched her leg above her knee, while jurors were later told he made a remark about her face before touching her nose for a moment.

Ms McCall put it to the complainer this behaviour had been “inappropriate”, which she agreed.

Earlier, a former civil servant in the Scottish Government told the court she felt “mortified” and “demeaned” after Salmond grabbed her buttocks during a photograph.

She said the pair had been posing for a photo at an event at Stirling Castle in November 2014 when Salmond grabbed her “forcibly”.

The woman, known as Woman K, said she had been shocked but did not want to make a scene while the photo was being taken.

She added: “I think my heart stopped, my adrenaline started pumping a bit.

“It made me just mortified. I just wanted to do my job, I wanted to be proud of myself coming in and doing my job and it felt like I was demeaned, that it was unprofessional, that there was nothing I could do about it.”

The woman told the court it was not an accident but “very deliberate”.

She added: “I can see how hands might brush past places but this was very deliberate.”

Gordon Jackson QC, also representing Salmond, put it to Woman K that the incident was not sexual but had instead been about “power”, which she had previously said in a police interview.

The court later heard from a civil servant who claimed he pushed away the hand of the then first minister who was trying to stroke a woman’s face.

The alleged incident is said to have occurred in a lift during a foreign trip.

Donald Cameron, who was Salmond’s private secretary, told the court he then told the accused to “behave” himself.

Mr Jackson said his client had been in “danger of behaving inappropriately”, which Mr Cameron said was a “fair description”.

Earlier, it was heard another woman showed the former first minister a picture of herself.

Salmond was also said to have described her on a different occasion as looking like a celebrity.

The complainer, known as Woman D, was working as a civil servant in the Scottish Government and alleges he sexually assaulted her on numerous occasions between May 2011 and June 2013.

He is alleged to have “grabbed” her behind, stroked her arms and touched and stroked her hair.

Mr Jackson put it to her that Salmond had done things which she felt were inappropriate, but they did not impact on the pair’s “general relationship” which she had already described as “good” overall.

Salmond is on trial over accusations of sexual assault, including an attempted rape.

He faces charges spanning a period between June 2008 and November 2014.

His lawyers previously lodged special defences of consent and alibi.

Consent was given as a defence for three alleged sexual assaults and an alleged indecent assault against three women.

Related: UK will leave EU at the end of the year “regardless of outbreak”