We live increasingly, it seems, in an age of protest. Sales of cardboard and marker pens must surely be at an all-time high, as the public laces up it boots and takes to the streets in favour of, or, more commonly, against any number of causes. Fracking being proposed in your area? Have a march. […] 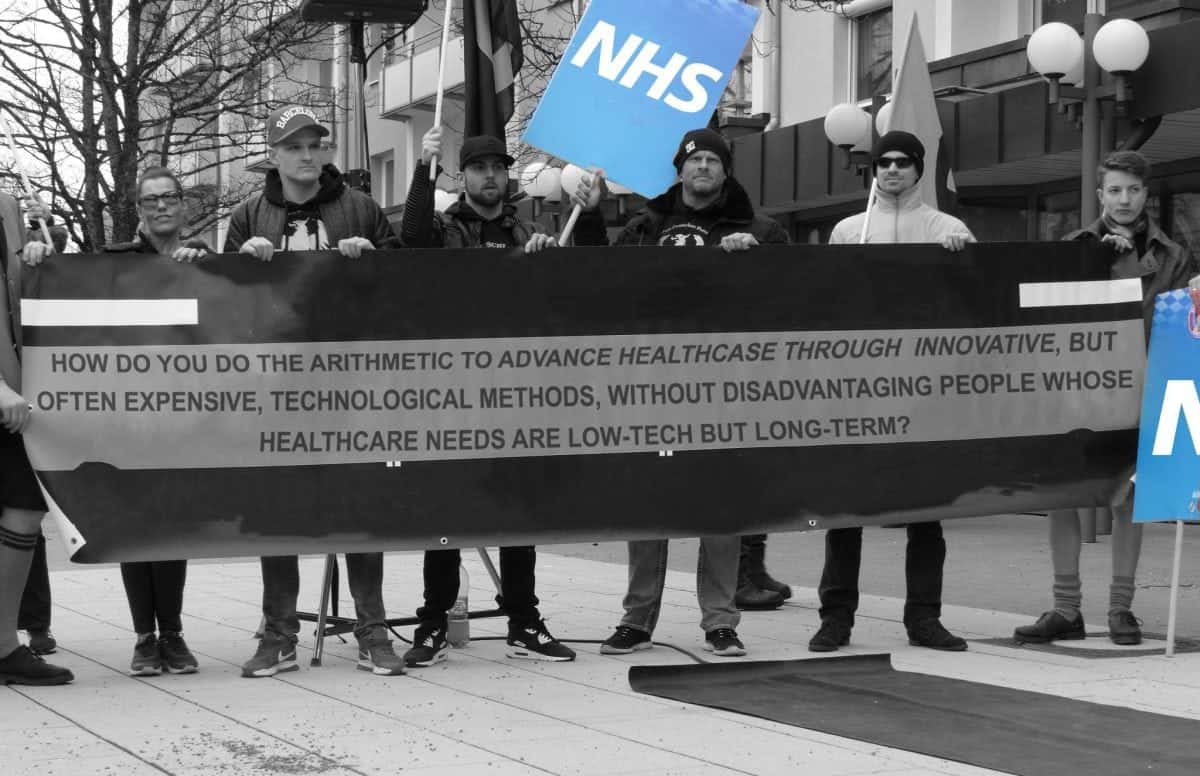 We live increasingly, it seems, in an age of protest. Sales of cardboard and marker pens must surely be at an all-time high, as the public laces up it boots and takes to the streets in favour of, or, more commonly, against any number of causes. Fracking being proposed in your area? Have a march. Don’t like the new US President? Organise a protest. So it was on 4 March that some 250,000 people took to the streets to demonstrate in favour of the NHS and against cuts to its funding. “No cuts, no closures, no privatisation.” The London Economic carried an article by one of the protesters, Jessica Taylor, who detailed the various worthies who had turned out to make their feelings known.

The UK has, of course, a long tradition, of which it is rightly proud, of public protest and of free speech. If you feel strongly about something, it is your democratic right to gather together with like-minded people and demonstrate your beliefs, so long as you don’t cause public disorder or incite violence. No doubt the people who turned out in London on 4 March were and are passionately devoted to the cause of the NHS and its protection. How are we to doubt the word of Jeeves Wijesuriya, Chair of the BMA Junior Doctors’ Committee, when he says that the NHS is at “breaking point”? Well, hang on a minute. Let’s just think about this for a moment. Firstly, a protest march is all very well, and 250,000 people seems an impressive number. But who is the message aimed at? The Government? History suggests that governments are rarely swayed by public demonstrations. There were claims that some two million protesters turned out to oppose the invasion of Iraq in February 2003 – a month later, we invaded anyway. Certainly, Donald Trump seems uncowed by the worldwide protests which have greeted his election. So that isn’t a particularly powerful argument. Maybe demonstrations are aimed at the public, the proverbial man on the Clapham omnibus? He might take notice of your protest, he might even agree, but, again, there’s little evidence to suggest that it’s going to affect his voting intentions when he comes to put his cross on the ballot paper. Instead, all too often, public protests become echo chambers, self-affirming cycles which serve simply to make the protesters feel virtuous and ‘engaged’.

But that’s really a second-order question. Much more important is looking at what the demonstration on 4 March was actually saying. “No cuts.” “Whose NHS? Our NHS.” “Save our NHS.” OK, let’s think about that in a bit more detail than a badly-drawn placard can accommodate. It is a simple fact that no country can spend 100 per cent of its GDP on healthcare. No-one, surely, disputes that fact. Once you accept that, it follows, as night follows day, that a decision needs to be made about how much money a country is willing to spend on a health service which is free at the point of delivery. How much, essentially, is the average voter in the street willing to give up for “our NHS”? Because there is a finite limit, there must be, so don’t use “rationing” as a scare story. Rationing inevitably exists. Call it something else if it makes you feel better. It doesn’t change the essential truth.

One of the wackier slogans seen at the great march was the charge that the Conservative Government is “deliberately underfunding the NHS”. Why on earth would they do that? What possible benefit would it bring to a government come election day to have starved – presumably for some supposed ideological reason – a beloved national institution of cash? Cui bono, if you want to get all Boris Johnson about it.

Let’s face some essential truths. The NHS is a vastly complex organisation. It is the fifth largest employer in the world, the only UK institution to make it into the top ten. It has an immensely varied skill set, and is tasked with providing diagnosis and treatment free at the point of delivery to an increasingly aged population against a backdrop of ever-more expensive medical procedures and drugs. We are dealing with an organisation designed in the 1940s to tackle problems presented by the 2010s. Stresses and strains are inevitable. Given that the level of NHS funding at any particular point will not meet every demand, what priorities in spending terms will the public and the health professionals accept? And the responses of those two groups may well not be the same.

These are hard issues, with which successive Secretaries of State have wrestled. Did any of them square the circle? Patently not. Some approached the NHS with civility, empathy and approachability – Stephen Dorrell springs to mind. Others, like Alan Milburn, came to the job with pragmatism, unwavering drive and, where necessary, a ruthless management style. The protesters wanted the head of Jeremy Hunt. For what? For not solving the entirety of the problems of the NHS? He’s hardly alone in that. It might be personally satisfying to single out the weekend payments for junior medical staff and march around Westminster calling for the resignation of the minister who proposed a change in the contract, but where does that leave us? Will it deliver a safe, financially viable future for the NHS? A brave Secretary of State – and he or she would need time in the job and the unwavering support of the Prime Minister – would stop tinkering at the edges and giving ample fodder to the single-issue protester. Instead he or she would try to refocus the minds of the electorate. What is the guiding principle? Is it free-at-the-point-of-delivery? If so, money will have to be found from elsewhere. Is it an increase in taxation to pay for more NHS services? If so, the electorate has to accept the consequences of higher taxes. How do you do the arithmetic to advance healthcare through innovative, but often expensive, technological methods, without disadvantaging people whose healthcare needs are low-tech but long term?

Try fitting that on a banner.