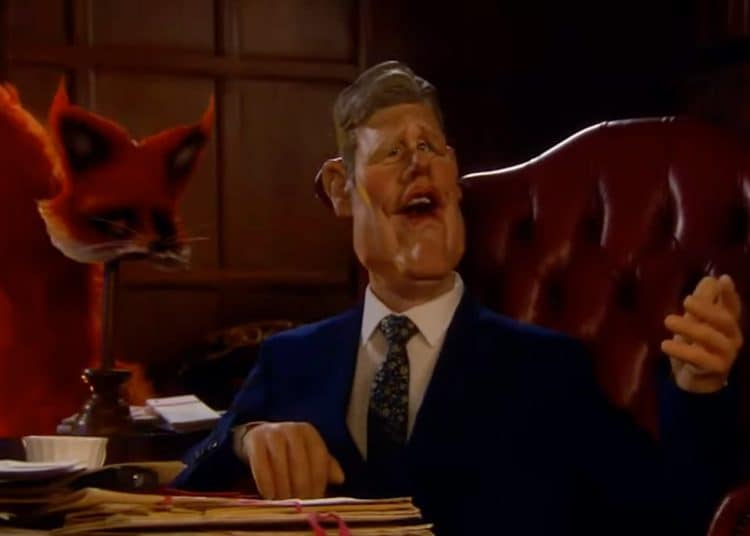 Good morning. Despite Mark Zuckerberg’s best efforts, there’s no shortage of news this morning. From fuel shortages to road blocks, newsletter writers are spoilt for choice. Yet, with a heartfelt apology and a heavy dose of regret, I must announce that, this morning, I’m going to write about that Spitting Image sketch. If you haven’t seen it, try your level best to keep it that way. If you have, I am sorry if what follows triggers an episode of shell-shock.

I am told that – way back when, before my time – Spitting Image was funny. “I used to love it,” one dismayed colleague told me yesterday, “it’s where Steve Coogan cut his teeth!” His dismay emanated from the political puppet show’s latest sketch, which arrived yesterday. Captioned ‘Keir Starmer gets a lesson from Jess Phillips on how to be a leader’, its premise is as follows: Starmer is moonlighting as a crime-fighting superhero called ‘Fox Man’ for some reason. He’s a bit rubbish at it, so in flies Phillips, masquerading as ‘Viral’, an “annoying, outspoken feminist superhero”. The Phillips puppet spends the next three minutes loudly slagging off the Starmer puppet for lacking passion, saying things like: “convene my big Labour vag” and “you wanna suck some f***** milk from my big Labour tits?”

We could spend all morning marvelling at how dialogue so diabolically dire made it through a writers’ room. I still don’t understand why Keir Starmer has been mocked up as ‘Fox Man’ – what’s that all about? But, as ever, there’s a broader point here: British political comedy is in crisis. Why? Because there is no fundamental power differential between those making it and those targeted by it. Among the foremost writers and performers on Spitting Image is Matt Forde, a man who hosts something called The Political Party – a live show and podcast which, in his words, “mixes topical comedy and an interview with a prominent politician”. He is currently very excited because it returns next week – and it features an interview with “one of the biggest stars in British politics”: Penny Mordaunt. “It promises to be a raucous night!”

I don’t mean to pile in on Matt Forde – there are plenty of other middle-aged men called Matt who busy themselves making disappointing political comedy. But these are people who are of the same world as the politicians they are seeking to lampoon. They like them and enjoy their company. They are seeking to do comedy with politicians, rather than about them. There’s no acid in their writing, not one kernel of contempt. They’re not punching up, so the content that follows is garbage – because it doesn’t want to upset the apple cart or rock the status quo.

Should we blame it all on Have I Got News For You? Probably. It was the first programme which really opened the door to politicians and let them in on the joke – and look where its cosy brand of “oh Boris, isn’t he such a buffoon!” landed us. The dominant strain of satire it germinated nods and giggles at our politics but rarely goes further. Those who do cross that line – Frankie Boyle and Nish Kumar spring to mind – soon find themselves on the outside looking in.

At the end of the day it’s a power thing. If you find yourself enthralled and intoxicated by it, you’re unlikely to challenge it. And that, ultimately, doesn’t make people laugh.