We have been able to access pictures of a new footbridge that it is hoped will be built at Tintagel Castle, North Cornwall. English Heritage want to build the breathtaking bridge at the world famous site, the legendary birthplace of King Arthur. The remains of the ancient castle at the moment can bee seen on […] 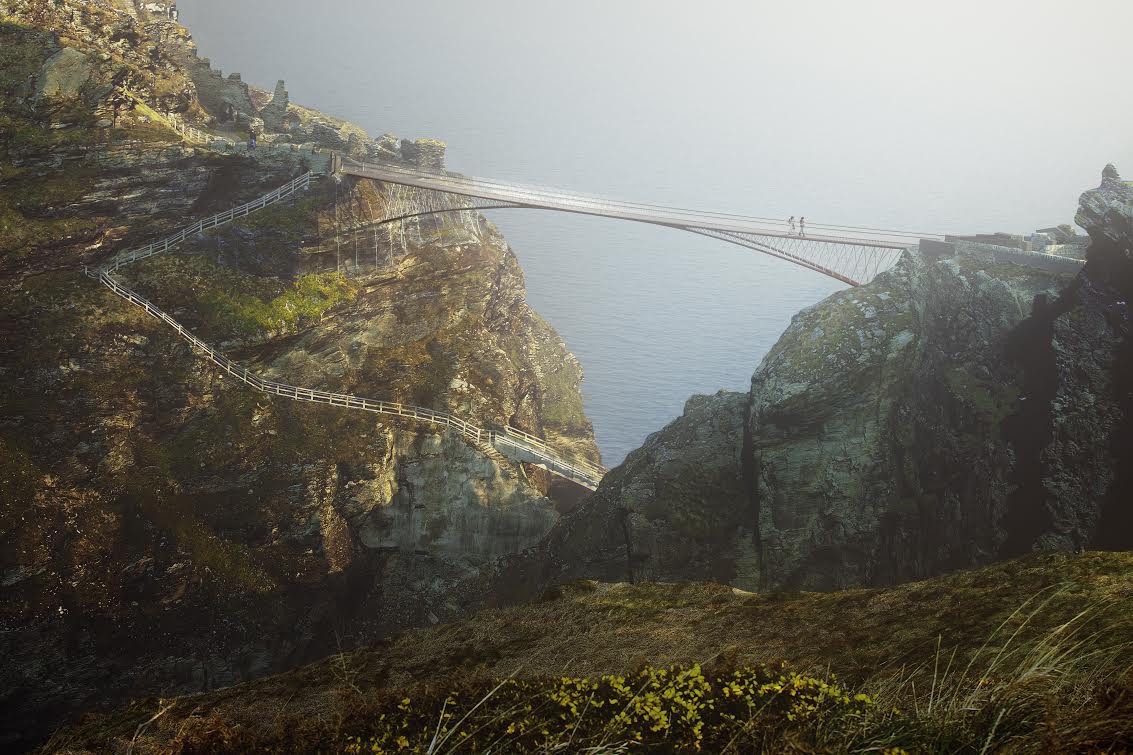 CGI of the new bridge planned for Tintagel, Cornwall. See SWNS story SWBRIDGE; A display to gather local opinions on proposed designs for a new bridge at Tintagel Castle is to take place in the Tintagel Castle Ticket Office & Shop over four days in November and December (6 - 7 November & 11 - 12 December), it has been announced. The display will feature further information about the proposed bridge, as well as the chance to meet the experts involved in the project, and learn more about proposed landscaping improvements to help preserve the important archaeology and ecology of this important site. There will also be a chance to hear about new geological investigations which have taken place at Tintagel Castle to assess the suitability of the site for such a bridge.

We have been able to access pictures of a new footbridge that it is hoped will be built at Tintagel Castle, North Cornwall.

English Heritage want to build the breathtaking bridge at the world famous site, the legendary birthplace of King Arthur.

The remains of the ancient castle at the moment can bee seen on both the mainland and headland that were at one point connected by a strip of land.

This new bridge which will be constructed slate, oak wood and steel will follow the route of the original land bridge.

The winning design by Ney & Partners Civil Engineers and William Matthews Associates has been selected from 137 entries from 27 countries. It has gone on public display for the first time this week to test the public response. The bridge is due to be completed in 2019 – if it gets planning and regulatory approval – and will be used by the castle’s 200,000 annual visitors.

English Heritage’s Project Manager Reuben Briggs said: “There was a great deal of interest in the proposal to build a new bridge at Tintagel Castle when we announced the winner of our design competition in the spring. “Over the seven months since then we have been conducting tests and investigations to ensure the proposed design would work and to minimise any potential impact on Tintagel’s archaeology and ecology. “

William Matthews, founder of William Matthews Associates, said: “Tintagel Castle attracts visitors for many reasons: the dramatic landscapes and geological formations, the Dark Ages remains, the ruined 12th century castle and the legends of King Arthur and Tristan and Isolde.

“Together, they breathe an undeniable and powerful sense of life into the place – to be invited to contribute to that is a rare privilege and honour.”