“It’s been the greatest privilege of my life to bring you the news. Thank you, stay safe. That’s Channel Four News. Good evening.” 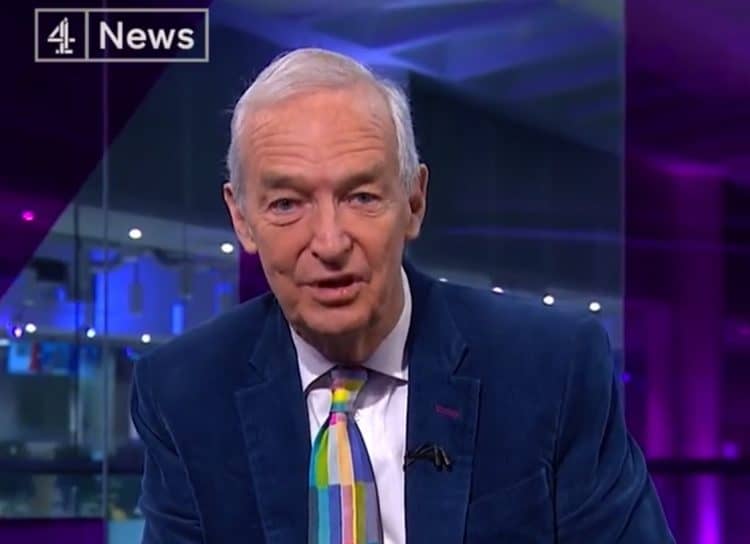 Veteran broadcaster Jon Snow says it has been the “greatest privilege of my life” to present Channel 4 News as he signed off from his final programme.

The 74-year-old journalist said the job had been “wonderful and rewarding” and paid tribute to his production teams and colleagues.

He is the longest-serving presenter in the programme’s history and is stepping back from the show after 32 years at the helm.

“At the coalface of news”

Concluding his final programme, which aired at 7pm on Thursday, Snow said: “Well, it’s been wonderful and so rewarding after so long at the coalface of news.

“But in the end…I am nothing in this studio without the significant and skilled technical and journalistic teams that night after night, ensure that Channel 4 News comes.

“The joy of working here is those teams and their skills, technicians and journalists and thanks to the farsighted governments, regulators that have given us our independent news in primetime.

“Thank you to all the people who have trusted me with their stories all over the world in often appalling circumstances.

“But most of all, I’m so grateful to you at home.

“It’s not always an easy watch.

“It’s been the greatest privilege of my life to bring you the news.

During the programme montage of Snow’s memorable career moments were played.

Scenes from Colombia, Scotland, Japan, Greenland and the US were played as well as moments from interviews including Margaret Thatcher, Liam Gallagher, Marcus Rashford and Hillary Clinton.

During the montage he was heard saying: “I think of my job as an informant.”

“I am absolutely fascinated by people.

“I really do love interrogating people, about the lives they live about the problems they suffer, about their hopes, their dreams.

“And I mean, that’s the motivation of any journalist, to find out more about what makes world a better or worse place.

“One does have to be wary of one’s emotions and being over emotional reporting, I don’t regret it.

“More than anything remain yourself.”

In emotional scenes following the programme’s end, Snow was clapped out of the building by his colleagues – a journalistic tradition.

Tributes to his long career poured in from colleagues, fellow broadcasters and politicians both ahead of and after the show.

Channel 4 News communications director Hayley Barlow shared a photo on Twitter of Snow looking out across the newsroom.

She wrote: “Going to be an emotional day, our last shift working together, before the Channel 4 News lights dim at 8pm.”

He tweeted: “Farewell Snowy ⁦@jonsnowC4⁩ after 32 years at Channel 4 News.

“You’ve been a consistently brilliant news broadcaster, and aside from the ludicrous ties, and dodgy helmets, a lot of fun too.

Snow previously said he ignored instructions not to wear bright colours when he first started at Channel 4 and wanted to make “a bit of a splash” while on air and not appear “aggressively boring”.

Former UK prime minister Gordon Brown said: “Jon Snow is a British institution and will always be so.

“Jon, your charitable work is less well known but attribute to your idealism.

“You deserve all our thanks for showing us that even amidst evil and injustice in this world a better world is possible.”

It was previously announced that Snow would continue to work with Channel 4 on long-form projects and spend more time focusing on his charitable work.

Scottish First Minister Nicola Sturgeon described him as “one of the best journalists in the UK”.

“A top interviewer but also a very knowledgeable interview,” she said.

“But more than any of that is just an all-round human being.

“So I hope that leaving may give you some more time to spend here in Scotland.”

Snow’s career in journalism began at LBC in 1973 before he moved to ITN in 1976, where he served as Washington correspondent and diplomatic editor.

He then became the main presenter of Channel 4 News in 1989.