Breaking: a magnitude 8.2 earthquake 281km (175 miles) southeast of Kodiak, Alaska has caused a tsunami warning for parts of the North American coast and Hawaii with 10 metre waves already reported. A Tsunami could hit between the Western Strait of Juan de Fuca to the Western Aleutians. Tsunami watches are in effect for coastal […] 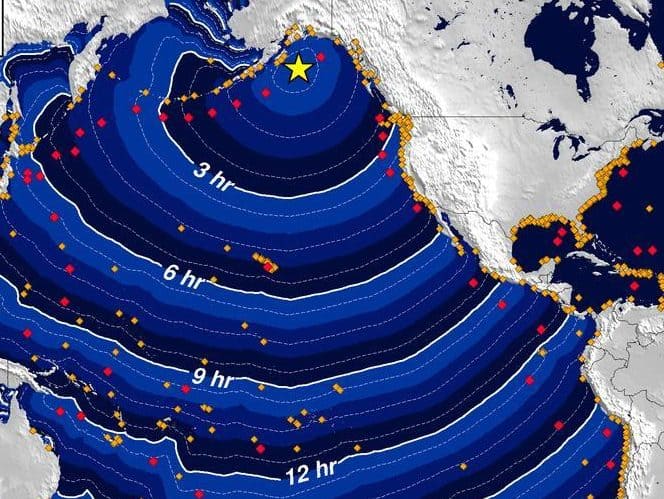 Breaking: a magnitude 8.2 earthquake 281km (175 miles) southeast of Kodiak, Alaska has caused a tsunami warning for parts of the North American coast and Hawaii with 10 metre waves already reported.

A Tsunami could hit between the Western Strait of Juan de Fuca to the Western Aleutians. Tsunami watches are in effect for coastal areas of Canada, Alaska, Hawaii and even Washington and Oregon too. People in coastal areas of Alaska and British Columbia being asked to go to higher ground or inland.

A tsunami warning has been announced, warning people: “Evacuate inland or to higher ground above and beyond designated tsunami hazard zones or move to an upper floor of a multi-story building depending on your situation.If you are in a tsunami watch area: Prepare to take action and stay alert for further information.Additional Information and Next Update: The tsunami message will remain in effect until further notice. Refer to the internet site tsunami.gov for more information.”

The first waves could arrive within the next three hours. Warnings indicate that widespread dangerous coastal flooding accompanied by powerful currents are possible and may continue for several hours after the initial wave arrival.

The quake is reported to be one of the biggest in US history and was recorded at a depth of 10km (6.2 miles) at 00.31am on Tuesday local time.

Only four earthquakes with a greater magnitude have ever been recorded in the US, all of which caused a tsunami.

“A tsunami warning is now in effect which includes the coastal areas of British Columbia and Alaska from the Wash./BC border to Attu Alaska,” warned the Anchorage Office of Emergency Management, “tsunamis are a series of waves dangerous many hours after initial arrival time.The first wave may not be the largest.”

Hawaii is on alert too. “Based on all available data a tsunami may have been generated by this earthquake that could be destructive on coastal areas even far from the epicenter,” the Pacific Tsunami Warning Center warned. “An investigation is underway to determine if there is a tsunami threat to Hawaii.”

A #Tsunami Warning has been issued for coastal areas of British Columbia. 8.0 quake off the coast of Alaska. https://t.co/bhBOJKJ7IH It is believed the waves generated may impact low lying areas under 20 metres.