Tommy Robinson’s broadcasting of footage featuring defendants in a criminal trial was “subjectively reckless”, High Court judges have been told. The former English Defence League (EDL) leader, whose real name is Stephen Yaxley-Lennon, is said to have committed contempt of court by filming defendants accused of the sexual exploitation of young girls and livestreaming footage […] 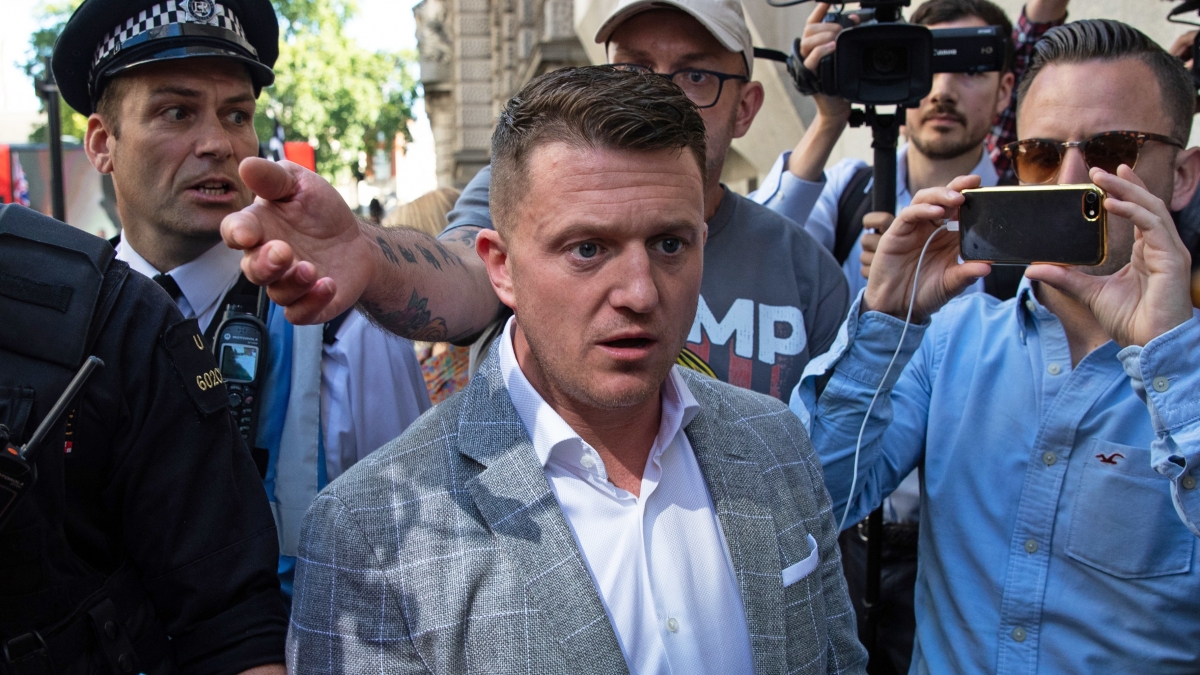 Tommy Robinson’s broadcasting of footage featuring defendants in a criminal trial was “subjectively reckless”, High Court judges have been told.

The former English Defence League (EDL) leader, whose real name is Stephen Yaxley-Lennon, is said to have committed contempt of court by filming defendants accused of the sexual exploitation of young girls and livestreaming footage on social media, in breach of a reporting ban.

Lawyers for the Attorney General Geoffrey Cox QC, whose application to have Robinson committed to prison is being heard at the Old Bailey, said a reporting restriction was put in place postponing the publication of any details of the case until the end of a series of linked trials involving 29 defendants.

Robinson broadcast the footage from outside Leeds Crown Court on May 25 2018, while the jury in the second trial was considering its verdict.

Outlining his case at a hearing on Thursday, Andrew Caldecott QC, for the Attorney General, told the court there were “inconsistencies” between various accounts Robinson has given of his efforts to check about reporting restrictions before the broadcast.

He said Robinson claims to have made checks, including looking at the court’s website and the door of the court.

However, the barrister said these claims are “contested” and Robinson will be cross-examined on them.

Referring to the reporting restriction, Mr Caldecott said: “He was at court, he could have ascertained its terms with ease, either on the day or earlier, and it was a wholly unreasonable risk to speculate as to what the terms were, or might be, and that subjective recklessness is enough.

“Even if he did not know for certain the terms of the order he knew the existence of such an order was likely and again was subjectively reckless.”

Footage filmed by Robinson of three confrontations with defendants in the trial were played to the court.

In one clip, he repeatedly asked two defendants “how are you feeling about the verdict?”, and in another extract Robinson said he thought the public should know what the defendants look like.

Mr Caldecott said that, throughout the livestream, Robinson referred to the media as “they” and his own followers as “you”.

He said Robinson made a “direct appeal” to his followers to “follow, harass and so forth” the defendants.

He added: “Even if it is not a direct appeal, the Attorney submits it is clearly an indirect appeal because he is saying, on this alternative view, that the media should be doing it and they aren’t doing it.

“He frequently describes his followers as ‘The People’s Media’ in the course of the livestream and there are several passages where he loosely advocates what might be called ‘vigilante action’.”

The barrister said Robinson also repeatedly asked those watching the livestream to share it online.

The court also heard that, due to an “administrative error” on the day Robinson made the recording, the reporting restriction did not appear on the Leeds Crown Court list and a copy of it was not posted on the door of the courtroom.

Richard Furlong, representing Robinson, asked Michelle Dunderdale, a member of court staff, why nothing appeared on the court list.

However, she said that everyone in the court office knew about the reporting restriction in the case.

Robinson served two months in jail before being freed after a previous finding of contempt was overturned by the Court of Appeal in August 2018.

But Dame Victoria Sharp and Mr Justice Warby gave permission for the Attorney General to bring fresh proceedings against him at a hearing in May.

Robinson addressed about 150 supporters gathered outside before entering the court building.

He said: “The crowd was segregated from the main walkway into the court, accessed by legal representatives and journalists, by a series of interconnected metal fences.”

Robinson, 36, from Luton, Bedfordshire, could be sent back to jail if he is again found in contempt, an offence which carries a maximum sentence of two years.

He was jailed for 13 months in May 2018 after he filmed people involved in a criminal trial at Leeds Crown Court and broadcast the footage on social media.

The sentence included three months for contempt at Canterbury Crown Court in May 2017, which was suspended at the time.

But he was freed from prison after serving two months of his sentence following the Court of Appeal’s decision to quash the finding of contempt made in Leeds.

The case was then referred back to the Attorney General, who announced in March that it was in the public interest to bring fresh proceedings against Robinson.

In the video, which lasted an hour and a half and was viewed online 250,000 times after being live-streamed on Facebook, he discussed a trial of members of a Huddersfield grooming gang.

The trial was covered by a reporting restriction banning publication of any details until after the end of several linked cases, in a bid to ensure the defendants all received a fair trial.

The contempt hearing, before Dame Victoria Sharp and Mr Justice Warby, is due to last for two days.