Thomas Cook had initially approached the Government prior to the collapse, asking for a £200 million loan to make up a shortfall in funding to avoid going bust. 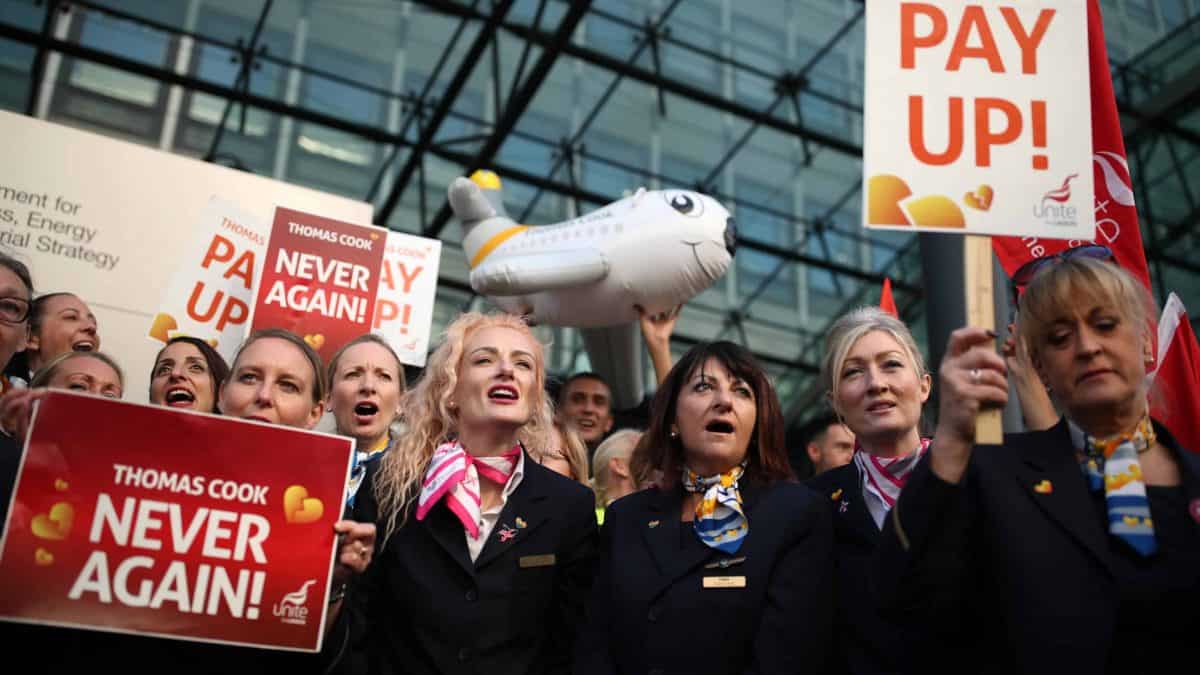 The collapse of Thomas Cook could cost taxpayers up to £160 million, according to early estimates.

Some £60 million is expected to come out of the government’s coffers to fund unpaid wages, holiday pay and redundancy costs for the company’s 9,500 staff following the travel firm’s collapse.

The cost is in addition to the Government’s own £100 million estimates for the biggest repatriation in living memory of 150,000 holidaymakers when the business went bust last month.

Thomas Cook had initially approached the Government prior to the collapse, asking for a £200 million loan to make up a shortfall in funding to avoid going bust, but ministers declined – concerned that it would set an unhealthy precedent.

Bosses subsequently claimed they had found the funding but it was on the proviso that the Government would act as a guarantor against the loan.

Again, ministers opted to not sign up, although the German government did fund Thomas Cook’s business in Germany.

Around £18 million has already been paid to staff, according to the Transport Salaried Staffs Association union, by the Insolvency Service from taxpayer funds.

The taxpayer has already picked up the bill for workers at collapsed firms Carillion and Monarch in recent years and in the first six months of 2019 paid out £110 million, according to a Freedom of Information request by property adviser Altus Group.

But Thomas Cook workers are concerned they could be waiting several months to receive the full amount they are owed – with claims forms needing to be completed and processed.

The £60 million figure was calculated by the PA news agency following conversations and analysis with industry insiders.

The statutory limit for redundancy payments is £525 a week. Insiders say the average payment for staff is eight weeks, meaning the amount is likely to be £40 million for the 9,500 workers.

Employees in the company’s high street stores, airlines and UK offices are also entitled to outstanding holiday pay. Based on an average of two weeks at the statutory rate of £525 a week, this works out at a further £10 million.

Originally, the Government wrote to some employees wrongly telling them they would not be entitled to holiday pay, but have since reassessed the claims.

Of those 9,500 workers at Thomas Cook when it went bust, 3,500 were kept on by the Insolvency Service – the Government department responsible for liquidating the business.

The remaining 6,000 staff not retained will be owed unpaid salaries for three weeks – again at the £525 a week limit – adding a further £9.5 million.

Manuel Cortes, general secretary of the Transport Salaried Staffs Association, said he had been told by the liquidators that they have now processed 99 per cent of the 5,000 claims they have received for redundancy payments.

“They have made interim payments totalling over £18 million, with more to follow. However, not every worker who lost their job has applied for redundancy. It’s vital they do so as quickly as possible,” he said.

He also pointed out that the compensation bill – which is funded by National Insurance contributions – could be far higher due to staff being dismissed without being given proper notice.

The union chief added: “Those who were dismissed without notice or consultation have a legal claim for compensation and we have asked the liquidator not to contest such claims.

“This will result in payments being made to our members in a more timely fashion and without having to resort to litigation.”