“They accuse me of interrupting them and not letting them finish, but you’ve already started off on the wrong path.” 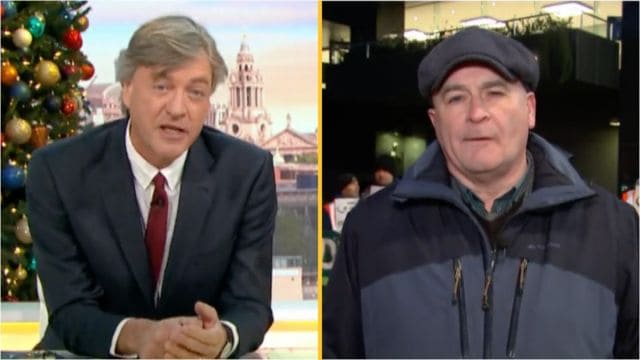 Richard Madeley has responded to the backlash that followed his interview with RMT boss Mick Lynch.

The Good Morning Britain anchor was widely criticised for his conduct while talking to Lynch in Decemeber when he constantly interrupted the trade unionist and told him to “jog on” after a debate on when the “real” start of the festive season was.

Many viewers were unimpressed with the presenter’s behaviour towards the interviewee, with some going as far as branding the segment “pathetic” and “unprofessional” on social media.

Ahead of another televised conversation with Lynch, Madeley defended his approach, saying:

“When [interviewees] don’t answer the question, therefore I have to interrupt them, because they haven’t answered your question,” he explained.

“They accuse me of interrupting them and not letting them finish, but you’ve already started off on the wrong path.”

Madeley then went on to double down on his assertion that Christmas begins at the start of December. He added: “What he was saying there was that these weren’t Christmas strikes, because in his book, Christmas didn’t begin until Christmas Eve – which, as you heard me say, is clearly nonsense.

“So you have to interrupt people sometimes. I know it means talking over them, and I don’t like doing that, it’s not good to watch, is it? But sometimes, you just have to do it, that’s the job.”

Later in the programme, Madeley and co-host Susanna Reid spoke to Lynch from the picket line at Euston station, and Lynch was able to give further insight into the demands of the RMT strikers.