A controversial scheme from America is set to be launched in British primary schools – stories read to children by DRAG QUEENS. The project will see men dressed as women visiting kids in class for ‘fun and inclusive’ reading sessions to raise LGBT awareness. The ‘Drag Queen Story Hour” scheme started in America where it […] 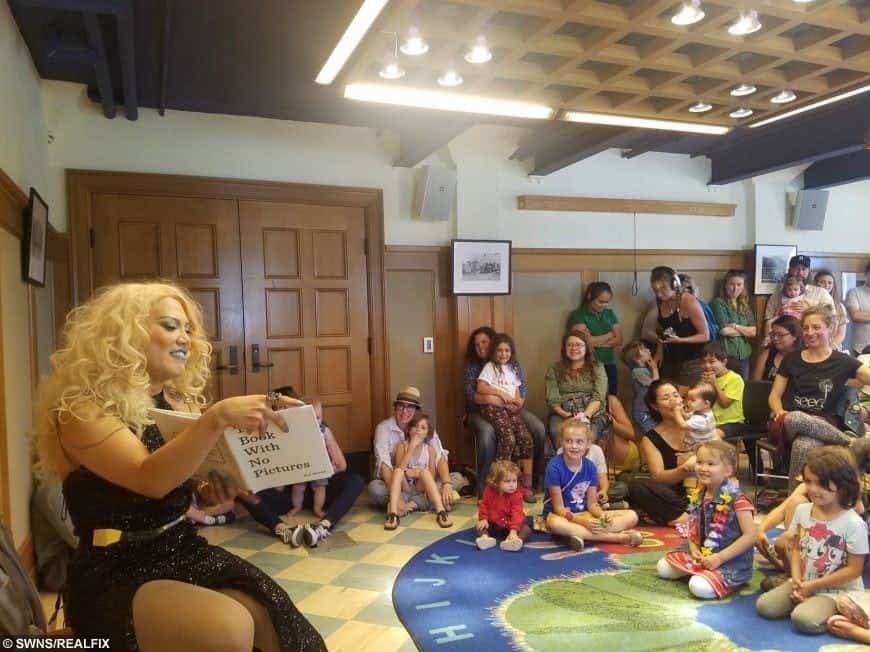 A controversial scheme from America is set to be launched in British primary schools – stories read to children by DRAG QUEENS.

The project will see men dressed as women visiting kids in class for ‘fun and inclusive’ reading sessions to raise LGBT awareness.

The ‘Drag Queen Story Hour” scheme started in America where it was praised by some but criticised by parents and education experts.

A new UK version is the brainchild of Tom Canham from Bristol who describes the sessions as “where fairytales come to life, presented by real Queens”.

Drag queen Honey Mahogany reads a story to children at the San Francisco Public Library as part of the Drag Queen Story Time scheme to teach children about LGBTQ issues.

He said: ”I saw a Tweet from the producers of the drag TV show RuPaul’s Drag Race about ‘Drag Queen Story Hour’ and replied saying ‘Why can’t we have something like this in the UK?’. “To my amazement they replied and suggested I set up my own group, and it went from there really.”

Mr Canham has launched a Crowdfunder campaign for the project and hopes to raise £300 to buy books and pay for CRB checks.

And in the last month he has managed to recruit 30 drag queens from around the UK – and says he is getting more requests to take part on a daily basis.

“It is so heartwarming – since publicising the project I have been contacted by drag queens from Bristol, Cardiff, Birmingham and across the UK,” he said.

“I have had interest from a variety of different queens – from young and old, drag veterans to really fresh queens – so I hope it will be a positive chance to foster new drag talent, too.”

In the US the scheme has been welcomed by many but also criticised.

One US educattion blogger wrote: ‘”Apparently, people around the country are interested in having their tax dollars spent paying for drag queens to read to their children.

“While this story time is ostensibly meant to introduce children to new ideas and open their minds, it is clear that the events skew in a particular political direction. ”

Tom said he has a selection of books he wants to offer, from conventional fairytales to feminist fairytales and gender fluid stories aimed at young children.

And he says that he hopes the project will “spread a bit of happiness and love.”

“There is a lot of negativity in the world at the moment and everything seems to be more polarised than I could ever imagine,” he said.

“Racism, homophobia, misogyny and the like are all learnt behaviours – we aren’t born with any form of hatred, you get taught it over time.

“If projects like these can go some small way to helping prevent or curtail that, then it can only be a good thing.” He says that most people have responded positively to the scheme – but that he has also come across harsh criticism and abuse.

“I have been called a paedophile for wanting to set up Drag Queen Story Time and accused of trying to incite young children into being gay.
“Thankfully that is only one in 1,000 people – and in a way it spurs me on, because that is the kind of negativity we are trying to change.

“Being a gay man I have had to deal with lots of horrible comments throughout my life, so it really is water off a duck’s back.”

Mr Canham does not describe himself as a drag queen – but says he would not rule out ‘dragging up’ and leading a reading session in the future.

Radar Productions, the company behind the American Drag Queen Story Hour, says the sessions “capture the imagination and play of the gender fluidity of childhood.”

The aim is to give children “glamorous, positive, and unabashedly queer role models.”

The first Drag Queen Story Time will take place at Bristol Pride on July 8 from 12.30pm.

A second event is scheduled to take place at the Watershed in Bristol city centre on August 25 from 10am.