Sabrina Kouider, 35, and Ouissem ‘Sam’ Medouni, 40, were at the do in Barcelona in 2011, six years before he was inauguration as the 45th President of the United States 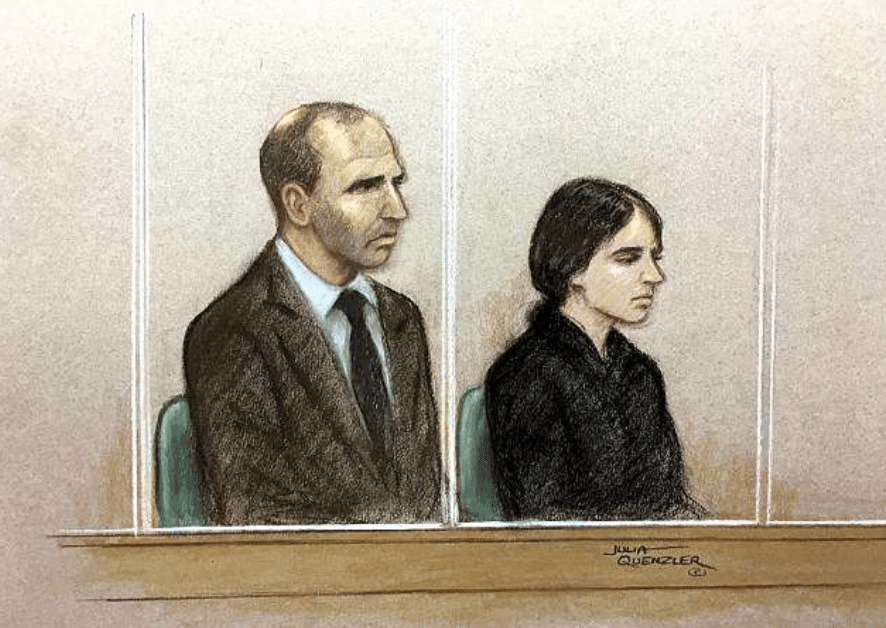 A fashion designer and her partner who allegedly murdered a French nanny once partied with Donald trump, a court heard.

Sabrina Kouider, 35, claimed she and her co-accused Ouissem ‘Sam’ Medouni, 40, were at the do in Barcelona in 2011, six years before he was inauguration as the 45th President of the United States

Kouider made the claim as she gave evidence at her trial where she and Medouni are accused of killing Sophie Lionnet.

Kouider bragged about her connections as she interrogated French au pair Sophie Lionnet about supposed links to her ex-boyfriend Mark Walton, formerly of Boyzone.

The mother is accused of torturing her nanny untill she falsely confessed to being paid to spy on them by Kouider’s ex, Mark Walton.

On September 11 last year, days before the 21-year-old nanny’s death, Kouider had boasted to her: “You know very well that all my friends are in high places.

“When I told you about Donald Trump you started laughing.

“When I told you about my friends, you have seen them, those in journalism, actors, producers, in make-up, in fashion, in music.”

Kouider and Medouni, 40, are accused of torturing the young victim over false claims she was in league with the former Boyzone member Mark Walton.

In September last year, they allegedly killed her in the bath then burned her body on a bonfire in their garden in Wimbledon, south-west London.

Kouider and Medouni are accused of holding the nanny underwater in the bath to get her to admit spying for Kouider’s ex, it is alleged.

The nanny’s charred body was discovered at their house in Wimbledon Park Road, South West London after a neighbour became concerned about the fire and called 999.

Sophie Lionnet had moved to Britain from Troyes, northeast France, to improve her English in 2016.The Old Bailey heard the couple’s interrogation and torture of the French nanny involved a videoed “confession” before they are alleged to have killed her.

Sophie Lionnet, who suffered broken ribs and breast bone, the prosecution said, was “terrified” of the defendants.

The fashion designer accused of murdering the French nanny broke down as she told a court how she beat the girl with electrical cable after feeling “betrayed.

Kouider claimed her partner was only with her for money and sex and she was “stupid and naive” to have continued her relationship with him.

She described it as having “ups and downs” and claimed he slapped her, kicked her and called her “dumb”.

The Old Bailey heard she is currently being held at the Bracton Centre, a medium secure mental health hospital in Bexley.

Kouider, also said she felt “shame” after Sophie Lionnet, 21, got drunk on one occasion, and her partner and co-accused Ouissem “Sam” Medouni, 40, had to collect her.

She added: “I was just really upset at her behaviour.”

And on another occasion she admitted she beat Sophie with electrical cable.

Icah Peart QC, defending, asked: “What was the thing that made you do that to Sophie?”

She replied: “I felt betrayed. I did everything good for her.”

Kouider broke down, before continuing: “It made me so upset.”

Mr Peart went on: “What made you pick up a piece of electrical flex to hit her with? And had you ever done that before?”

She said she hadn’t, and that nobody had done it to her either.

Her barrister asked: “How many times do you think you hit her?”

Kouider told the Old Bailey: “Not many times. Her arms and legs.

“She was saying sorry.”

But she said Ms Lionnet did not cry, adding: “I am the one, I fell down. I was just crying. Because I was having a panic attack.”

She said she phoned Medouni, who “just said don’t do it again”.

Kouider said: “I was crying. I just told him, please just come. He did come.

Kouider also told the court Medouni was the man who accompanied her to her old Queensway flat when she went to collect property, and not Duncan James from Blue.

She said she remembered there being a problem with the landlord, but denied threatening him with a crowbar or seeing that happen.

Kouider and Medouni, both of Southfields, south west London, admit perverting the course of justice but deny murder.

Wearing all black, Kouider described her early life and said she was born in El Attaf, in northern Algeria before moving to France

She added: “But it wasn’t really what I was expecting. It was so difficult for me to make new friends.”

The court heard she accidentally fell off a balcony, and broke both hands, her back, hip and leg, and smoked cannabis to “help me with my pain”.

She said she sold pancakes at a French funfair, worked as a nanny in France and the UK for up to seven years, and for the Royal Mail in Chelsea.

The court heard she met Medouni in 2001 at the funfair, who later took her virginity and told his friends.

Kouider said: “He started telling them what he did with me and it made me really upset.”

She got drunk and ended up in hospital, she added.

At one point they stopped seeing each other and she met someone else, and Medouni later accused her of cheating on him.

She added: “When I wasn’t even cheating. Every time he was pushing me.

“He was calling me dumb all the time.”

They reconciled, but after her female boss dropped her home she said he “slapped me in my face” after wrongly believing she had got a lift from a man.

She once met his father by accident, despite Medouni trying to hide her, she said.

Kouider said: “I was really scared because he said ‘my father isn’t allowed to see you.’ So I was trying to hide but it wasn’t possible.

“He wasn’t pleased with that.”

She had to have an operation as a result, jurors heard.

Medouni went to Lyon to study in 2002 but she did not go and see him, the court was told.

Kouider said: “He didn’t want me to be close to him. He refused to see me.”

But she found a picture of him with a girlfriend, she said.

Kouider said: “It did make me sad but I was so stupid and naive to carry on with him.

“And he always say that’s not true. He always tried to deny it.

“I wanted to have a family with him, yeah. And live together.”

In 2004 she moved to the UK as she wanted to become an air hostess and learn English, and Medouni came to stay.

They arranged to have their relationship religiously blessed but he stood her up, the jury was told.

She said: “He never showed up and he put his phone off.”

Kouider added: “Sam was only with me for sex, nothing else, and money.”

On another occasion, he kicked her hard in the leg, she told the court.

Describing her relationship, she said: “It was ups and downs.”

In 2011 they went to Barcelona, where they were invited to a party attended by Donald Trump, the court heard.

But Kouider said they split up afterwards.

She said: “We did argue. He was always making me cry, and I didn’t understand his behaviour, why he was like this with me.

“I wasn’t asking for much. I was just asking to be together in the right way.”