The former Tory MP was filmed whilst being branded a ‘traitor' by Amy Della Mura known as Based Amy on social media who is charged with harassment. 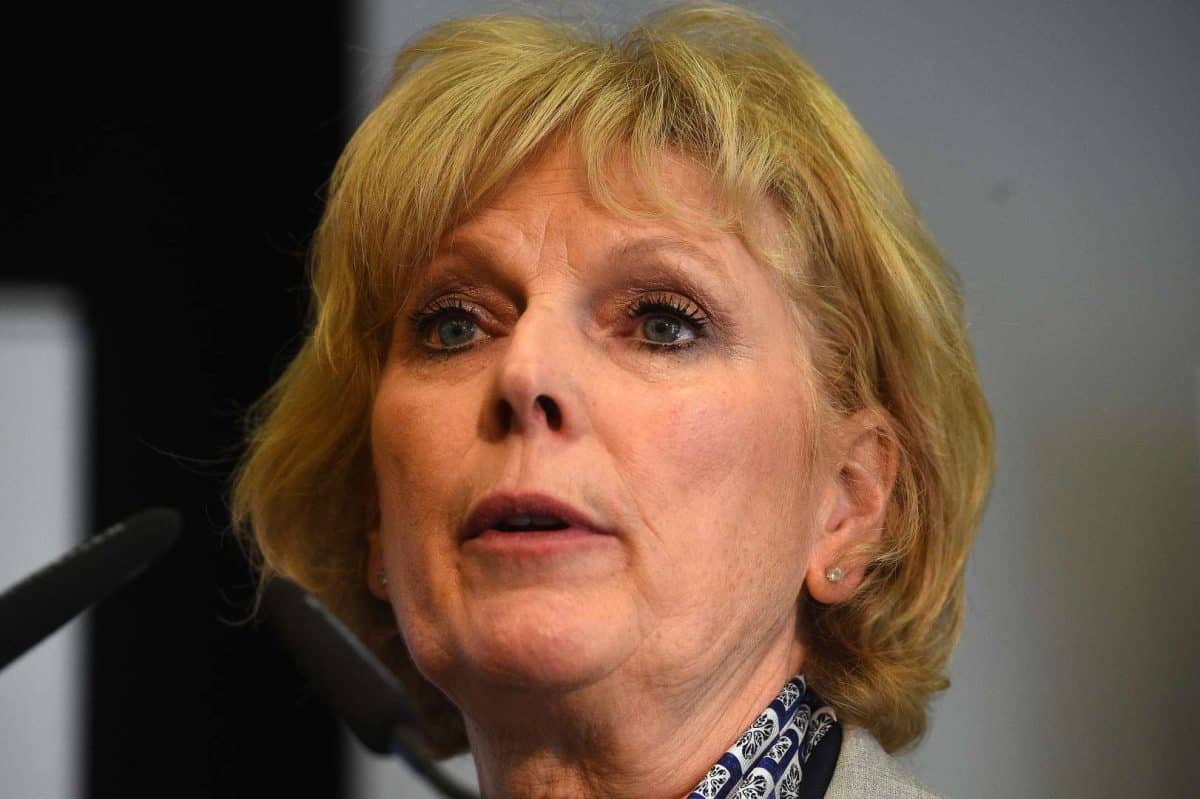 Former Tory MP Anna Soubry has described her fear as she was relentlessly harassed by an ‘obsessed’ Brexiteer, a court heard.

She told a court how she was reminded of tragic Jo Cox as she was branded a ‘traitor’ and a ‘disgrace’ by Amy Della Mura.

The former MP, who defected to Change UK, was filmed at a meeting by Della Mura, 56, who described herself as a citizen journalist in January, a court heard.

She was filmed by the BBC saying “Anna Soubry is a traitor” in the central lobby in the Houses of Parliament but has denied harassment without violence.

The first incident happened at the Radisson Blu Edwardian Hotel in Bloomsbury, central London, on January 23.

“I genuinely thought that this defendant was a threat to my safety.”

Anna Soubry, former MP for Broxtowe, Notts said: “On the second incident my fear in relation to this woman and her unusual obsessive behaviour, in my view, led me to be more frightened than any time and even recounting and recalling it in evidence I find very difficult.

“Remember Jo Cox, one of our colleagues, had been murdered, I know it was some time ago, by a far right extremist with an obsession.”

Former journalist Ms Soubry explained how as a TV reporter she conducted ‘doorstep interviews’ and added: “She’s filming quite deliberately and, in my opinion, to humiliate me.

“It’s deliberately used to catch people out to ask them difficult questions in order to shame them.

“It takes a lot to frighten me. I’ve been around. I covered the miners’ strike, I was in a number of frightening situations.

“All I can say is that I was frightened, shaken, which is why I visited the deputy speak the next day. It was all about her, she wanted to dominate the entire proceedings.

“I have never been in this sort of situation. I’ve received a number of death threats.

“I’m afraid she has frightened me more than anybody else.”

On the second event, she said: “There was somebody over my shoulder who was calling me by my first name and then using the word traitor which I took great offence at because I love my country.

“Then I realised it was the same woman and that’s when I got again very frightened because I took the view she’s come for me again and she’s used the word traitor.

“I distinctively remember saying, ‘oh it’s you’ and I asked for the security people and that’s why I said, ‘get the police’.

“I was in central lobby in parliament being called a traitor, the police did nothing to stop it or intervene. I did not feel safe and wanted to be home where I did feel safe.

“You don’t like to admit being frightened by these people because that’s what they want to achieve to shut you up.

“I genuinely thought that this defendant was a threat to my safety.”

Ms Soubry motioned to show the woman held a phone about a foot from her face and added: “It’s a modern day protesters’ tool and in my view it’s used deliberately by protesters, I don’t care what their views are, to intimate and harass people that they don’t agree with.

“It’s unfortunately common to me because I’ve been particularly subjected to it.

“It’s a new feature. A camera is deliberately placed in your personal space and in my opinion it’s an act of harassment, it’s intimidating.”

Earlier prosecutor Philip Stott said on March 22 the MP’s assistant saw footage taken by the defendant of her the previous day that showed her attempting to “confront” Ms Soubry after being told over the phone that she would be in Whitehall.

The court was shown a further Youtube clip by the defendant outside the statue of Oliver Cromwell at Westminster on March 27 saying: “I’m just on my way to the Houses of Parliament to see maybe a few MPs who have betrayed us, maybe I’ll see Anna Soubry but I won’t look for her but if I see her I’ll have a little word.

“There’s a lot of people I want to talk to. Brexit now, no deal, no delay, no backstop, no betrayal.”

“I’m being persecuted because I’m on the wrong side of politics.”

Della Mura was arrested on September 6 outside the Houses of Parliament and refused to answer questions in custody.

She cried in court as she gave evidence, saying: “I wasn’t targetting her at all. I’m definitely not obsessed with Ms Soubry, not at all.

“I just don’t understand the language that’s being used, frankly it’s so ridiculous.

“I’m a citizen journalist so I give my opinion about things. I was just having a very civilised discussion and just questioning her about things she was doing which I thought was my right as a member of this society.

“Everybody calls everybody names, so the fact I called her a traitor is not earth-shattering.

“I just threw her in because she happened to be standing there. Nobody told me about Anna Soubry being upset. I’m completely flumoxed by the whole thing.

“I did not harass her in any way shape or form. I thought my behaviour was impeccable quite frankly.

“It was purely business, politics and what she does as a representative. I’m being persecuted because I’m on the wrong side of politics.”

Chief Magistrate Emma Arbuthnot adjourned the trial for the parties to give their closing submissions.

Della Mura was released on conditional bail not to contact Ms Soubry and enter a defined area around the House of Parliament.