Time for a government apology? 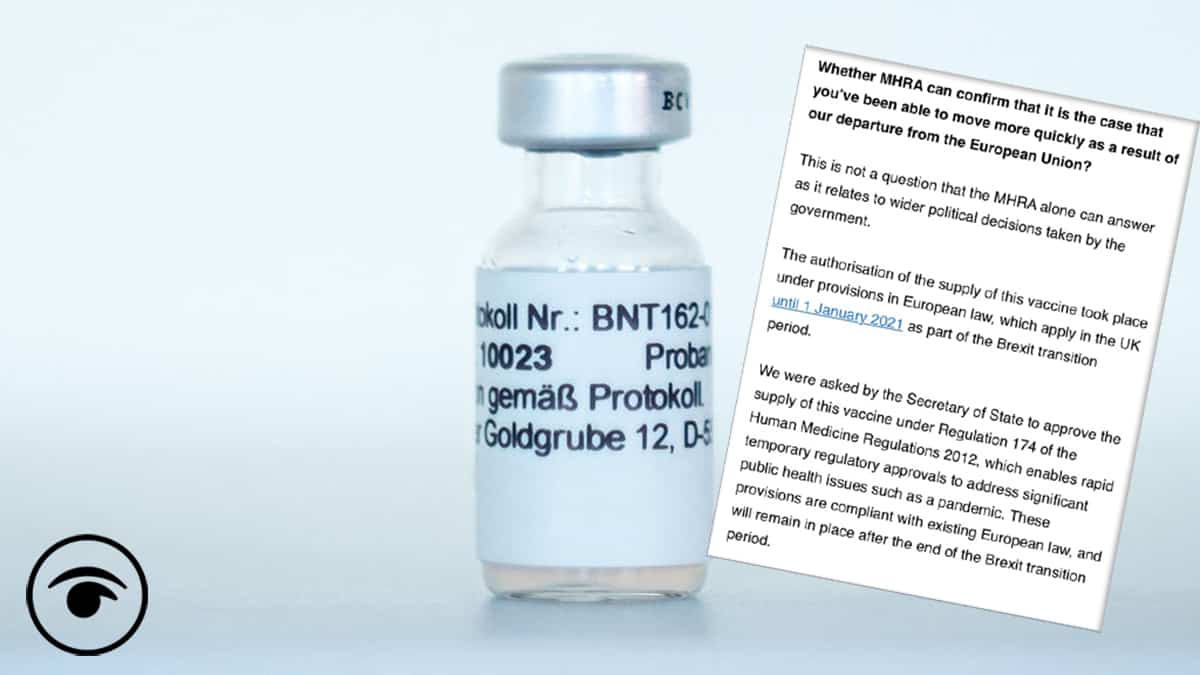 The Medicines and Healthcare products Regulatory Agency has issued a statement which rubbishes claims from several ministers that Brexit sped up the approval of Pfizer/BioNTech vaccine this week.

Responding to the BBC’s Lewis Goodall, the agency made it clear that the authorisation of the supply of the vaccine took place under provisions in European law, which apply in the UK until 1st January 2021 as part of the Brexit transition period.

Jacob Rees-Mogg, Alok Sharma, Nadine Dorries and, indeed, the Health Secretary himself, Matt Hancock, were among the prominent government ministers who tried to politicise the fast approval of the vaccine by linking it to Britain’s exit from the European Union.

Asked by presenter Julia Hartley-Brewer whether the swift approval had been a “benefit of Brexit”, the Health Secretary said:

“Well, that’s right. It is absolutely clear that because we’ve left the EU, I was able to change the law so that the UK alone could make this authorisation decision.”

NEW: MHRA issues statement to me on whether or not Brexit accelerated the Pfizer vaccine licencing process.

They confirm licencing has taken place under provisions as set out in EU law.

By extension Brexit hasn't (as some ministers have claimed) allowed us to licence early. pic.twitter.com/YmUToqUcVt

But the latest statement from the regulator seems to put pay to those remarks, and indeed sets out how the entire process had been done under European law.

As Goodall reports, since 2012 the UK MHRA has been allowed (using Regulation 174 of the Human Medicine Regulations 2012) to give temporary approval to an unlicensed product in the event of a pandemic or public health emergency.

So that has been the case even when Britain was part of the EU.

Indeed, the regulation comes via European directive 2001/83/ECAs transposed into EU law. That’s why the MHRA says: “These provisions are compliant with existing European law, and will remain in place after the end of the Brexit transition period”

Problem is, several prominent ministers have said something quite different.

Matt Hancock told Times Radio that “Because of Brexit we’ve been able to make a decision [to approve the Pfizer vaccine] based on the UK regulator, a world class regulator, and not go at the pace…

Time for a government apology?