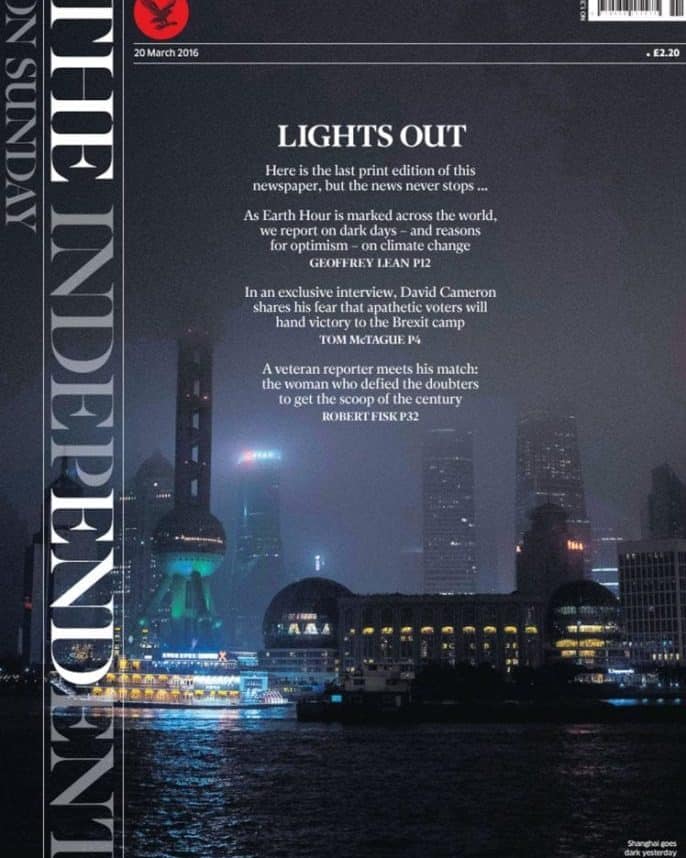 A copy of the last print edition of the Independent on Sunday newspaper. PRESS ASSOCIATION Photo. Picture date: Saturday March 19, 2016. The paper's final front page features a poster background of the darkened skyline of Shanghai in China with the headline Lights Out. See PA story MEDIA Independent. Photo credit should read: PA Wire

The Independent on Sunday ran its final print edition today featuring a poignant picture of Shanghai during Earth Hour.

Landmarks across the World including The Palace of Westminster, Buckingham Palace, The Shard and The Ritz hotel in London tuned off their lights for an hour between 8.30pm and 9.30pm local time on Saturday. Some 10.4 million people also joined in with the global blackout, which now includes 178 countries worldwide.

And as prominent buildings vanished into the night, so did a prominent newspaper title. After 25 years, the final print edition of the Independent On Sunday was published today. The front page featured a striking image of Shanghai with parts of ‘The Independent’ dimmed to spell ‘The End’.

First (and last) look at the @IndyOnSunday front page. As strong, distinctive and smart as 1990. Goodnight. pic.twitter.com/CQVZIkjOqZ

The editorial recounts the paper’s founding principles of being green, socially and economically liberal and ‘wedded’ to ‘social justice’.