Grazing reindeer help increase plant diversity in Arctic regions despite climate change, according to new research. Swedish scientists have found global warming actually reduces the number of plant species in the tundra. But plant-eating animals, such as reindeer and voles, can help plant diversity in the long run. The researchers believe animals could help protect […] 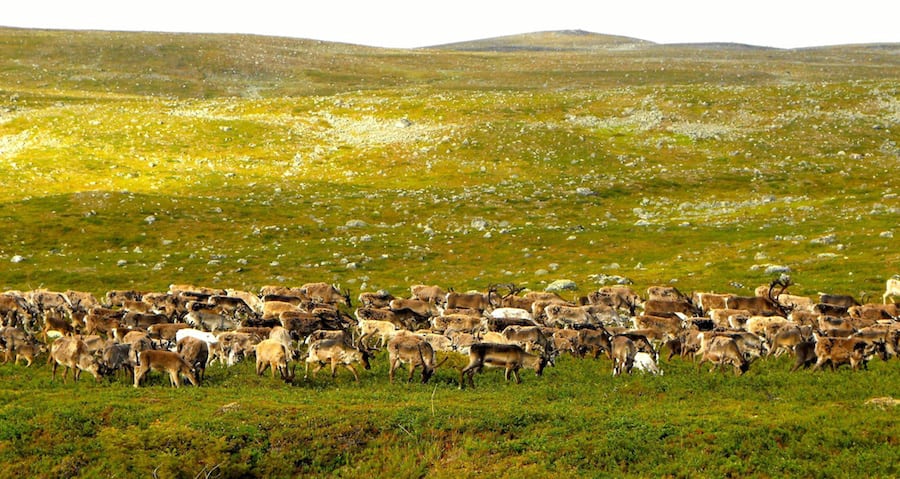 Swedish scientists have found global warming actually reduces the number of plant species in the tundra.

But plant-eating animals, such as reindeer and voles, can help plant diversity in the long run.

The researchers believe animals could help protect diversity by preventing losses of small and slowly-growing species.

Earlier studies have found tundra plant diversity will decrease in response to a warmer climate.

Howver researchers examined whether the response depends on the abundance of grazing animals, particularly reindeer, voles and lemmings, which are very common in tundra ecosystems.

The scientists from at Umeå University in Sweden, and Oulu University in Finland, tested this through experimental warming of vegetation on tundra meadows with and without reindeer and voles.

Dr Kaarlejärvi said: “”We found that the warming increased the number of species in plots that were grazed, because it enabled small tundra plants to appear and grow there.

“But when we fenced reindeer, voles and lemmings out, vegetation became denser and the light was limited. As a result, many small and slowly-growing plant species were lost.”

With their test model the researchers were able to see the knds of species were most affected by warming and grazing.

The new findings suggest that mammalian herbivores could generally help protect diversity in warmer climates by preventing losses of small and slowly-growing species.

The study was performed in Kilpisjärvi in north west Finland, where the research team tested the importance of grazing animals, warming and nutrient availability by combining small greenhouses that increased the summer temperature by 1-2 degrees Celsius, small fences that excluded reindeer, voles and lemmings, as well as by use of fertilisation.