Helen Macdonald's "innocent" alpaca was culled on Tuesday, after a toxic legal battle. 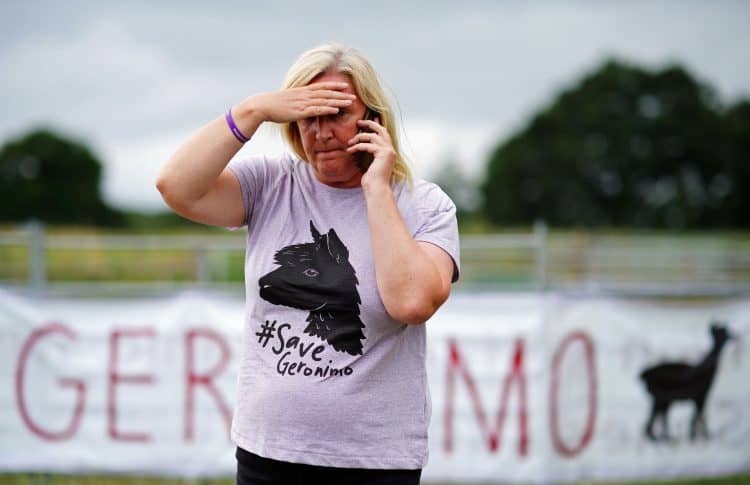 The owner of Geronimo the alpaca has called on the environment secretary to resign, accusing him of “murdering an innocent animal” – days before a warrant for the animal’s destruction was due to expire.

In a statement, Defra said that a court warrant, which was due to expire on 4 September, had been used to seize Geronimo from the farm and euthanise him.

Macdonald insists that bovine tuberculosis tests previously carried out on the alpaca returned false positives and has been campaigning for his destruction to be halted.

She had applied in writing for an independent witness to be present when a post-mortem examination was carried out on Geronimo, who came to the UK from New Zealand in 2017.

However, on Tuesday evening she posted a letter to her Twitter account that appeared to be from the Government Legal Department.

This stated that Apha “was not in a position to accommodate” her request for her vet to observe the post-mortem examination “for health and safety, Covid-19 and site security reasons”.

It added: “The examination proceeded in accordance with standard operating procedures for suspected TB clinical cases and TB test-positive animals, which do not allow for the obtaining of samples for private testing”.

Macdonald tweeted: “Citing Covid and security reasons are appallingly weak excuses to block an independent observer to the post-mortem of Geronimo.

“This is an immensely arrogant and blatant continuation of their mission to conceal their processes and act without transparency and fairness”.

She said: “I am calling for George Eustice’s resignation.

“The Secretary of State has acted in bad faith, refusing to engage with us to discuss a research solution that would further the government’s very own objectives.

“Instead he has resorted to bullying and cowardly tactics, hiding behind government lawyers and refusing to listen to us.

“He has murdered an innocent animal rather than doing something productive and good for this country and small farmers like me.

“He is unfit to hold office.”

Macdonald previously described herself as “shocked and disgusted” at how the Government had acted and called for Eustice to come to her farm and explain himself.

“They have murdered a perfectly healthy animal from New Zealand,” Macdonald said. “I wasn’t even here, they just stormed the place.

“They took him from here alive, they shouldn’t have done that – it was cruel.

“My understanding was that they had the right to come and destroy Geronimo however they felt appropriate.

“They did not have the right to drag him into a horsebox and drive him away, on his own, without his companions.

“They rounded up the rest of them and stressed them all out, then they dragged and took him away.

Downing Street had expressed sympathy for Macdonald, with the Prime Minister’s official spokesman saying it was “highly distressing” for people to lose animals to tuberculosis.

“I needed him to stop this in its tracks when he had the opportunity and look what’s happened.

“They’ve decided to take death at all costs instead of learning and science. They all should be out of a job.”

Macdonald accused the government of “stringing us along” in recent weeks as she and her team tried to engage with them about alternative options to putting down the alpaca.

“In fact, all the time, they were simply planning to murder Geronimo,” she added.

Dr Iain McGill, veterinary scientific adviser to Ms Macdonald, accused Defra of “mentally torturing” her and “trying to kill their way out of trouble”.

“I am absolutely disgusted that while I focus on Nowzad Op Ark to help get vulnerable vets, vet nurses, children and 150 animals out of Kabul, with which Defra have helped, that they should go behind my back and execute Geronimo, for whom I am a key protector,” he said.

“Against a background of death, destruction and chaos in Kabul, Defra decide to kill the most famous animal in the world based on fake science and fake testing.”

Dominic Dyer, of the Born Free Foundation, said the death of Geronimo would be “hugely damaging” to the government and was an “insult” to Macdonald’s efforts to save her alpaca.

“The killing of Geronimo was a desperate move by Defra to hide decades of negligence, incompetence and deceit surrounding bovine TB policy and is a national disgrace,” Dyer said.

In a statement, Defra confirmed that a court warrant had been used to enter the farm to remove Geronimo, who was then euthanised. It said bovine tuberculosis (bTB) is one of the “most significant animal health challenges that England faces today” and costs taxpayers more than £100 million each year.