He said the country has the ability to "bring Jersey to its knees if necessary". 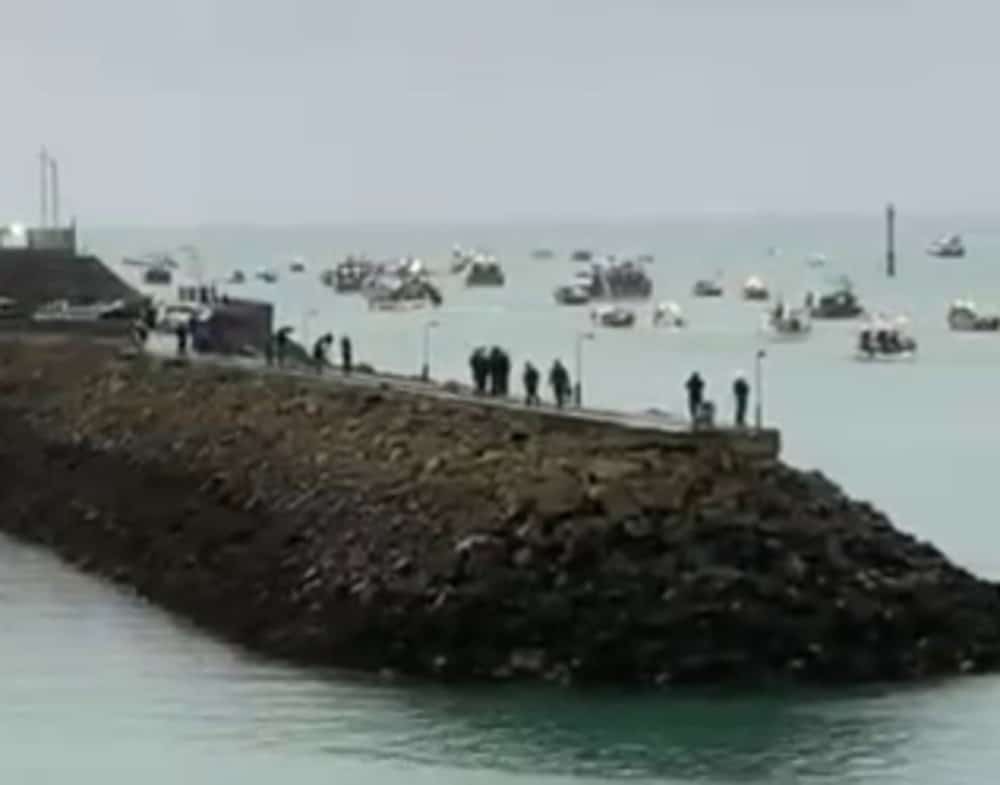 The head of the joint Normandy-Brittany sea authority has declared they are “ready for war” as tensions threaten to spill over in the Channel.

Responding to two navy vessels being sent by Britain to patrol the situation last night, France’s fishing chief issued a stark warning to the island, saying its country had the ability to “bring Jersey to its knees if necessary”.

Agence France-Presse reported two police vessels have been sent to the island as disputes over post-Brexit fishing rights continue to intensify.

Earlier, dozens of French fishing boats gathered off Jersey’s capital, St Helier, amid fears they were preparing to blockade the harbour.

Jersey’s external relations minister, Ian Gorst, said he would be speaking to the French fishermen in an attempt to defuse the worsening row.

“It’s important that we respond to threats, but the answer to this solution is to continue to talk and diplomacy,” he told BBC News.

HMS Severn and HMS Tamar have been deployed by the UK Government to “monitor the situation”.

The row erupted after the Jersey government said French fishing boats would be required to obtain a licence to fish in the island’s waters under the terms of the UK’s post-Brexit trade deal with the EU which came into force last week.

It caused anger in French fishing communities who complained that boats which had operated there for years were suddenly having their access to the fisheries restricted.

Earlier this week, French maritime minister Annick Girardin said Paris would cut off electricity to Jersey – which gets 95% of its power supply from France – if the dispute was not resolved.

The French maritime authority for the Channel and the North Sea said the patrol boats Athos and Themis were being sent to the island “to ensure the protection of human life at sea”.

A spokeswoman said they were being stationed to be in a position to intervene “as quickly as possible” if the situation worsens.

Downing Street said on Wednesday that HMS Severn and HMS Tamar were being deployed as a “precautionary measure”.

Local fishermen reported that around 60 French boats had gathered off St Helier early on Thursday, with some entering the harbour before leaving after an hour.

Mr Gorst said the protest had been peaceful, “as we would expect”.

Dimitri Rogoff, who heads a group of Normandy fishermen, insisted they were not seeking to blockade the port.

“This isn’t an act of war. It’s an act of protest,” he told the Associated Press news agency.

Nevertheless, there was concern on the island that the French action could escalate if the dispute was not resolved.

Fisherman Josh Dearing described the appearance of the French boats, some letting off flares, as “like an invasion” and he welcomed the presence of the Royal Navy ships.

“The French can be hostile. All of our livelihoods are in that harbour and if they wanted to they could cause damage.

“The French being the French, they don’t mess around. They can blockade their own harbours – they wouldn’t think twice about coming and doing it to us.”

“The French being the French, they don’t mess around”

Mr Gorst said they are “extremely grateful” for the support of the UK Government, while stressing the need to find a diplomatic resolution.

“We’ve heard disproportionate threats from Paris and now with a potential blockade, but the answer to the issues that are being faced are without doubt talking and diplomacy,” he said.

The Jersey government has said that of the 41 French boats which applied for licences on last Friday, 17 had been unable to provide the evidence needed to enable them to carry on as before.

Mr Gorst said: “It’s really important that we are able to work with those fishermen to help them provide the necessary evidence so that, if required, their licences can be amended.”