“It was peaceful and non-violent and morally and ethically justified. The damage was relatively minor and easily repaired," he said. 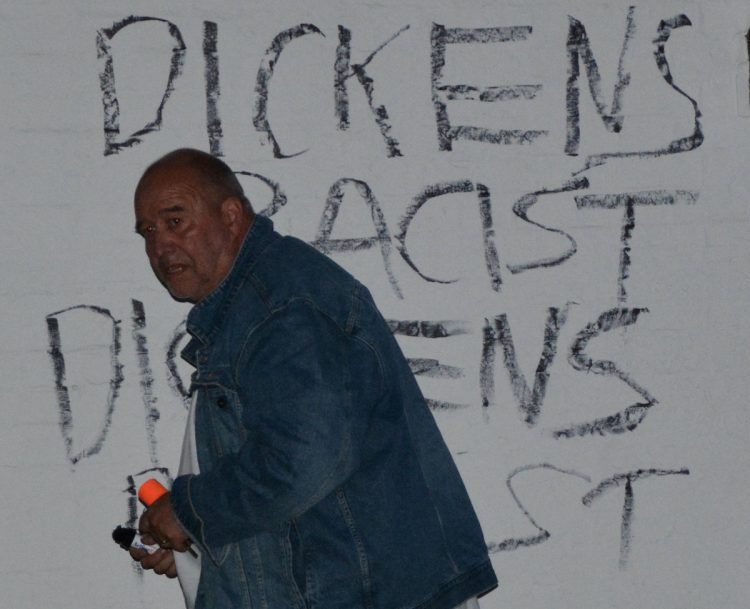 Ian Driver with the graffiti he wrote.Credit;SWNS

A former district councillor caused £3,500 worth of graffiti damage to public buildings in protest at a memorial plaque to a Morris dancer who wore a black face.

But after escaping with a fine, a defiant Ian Driver, 64, said outside court: “It was a good result. In certain circumstances breaking the law is a good thing to do.”

Driver also targeted a museum dedicated to Charles Dickens, who he calls a “genocidal racist”, by spraying “Dickens Racists.”

He proudly said he caused the damage and said he considers what he did to be “direct action” similar to the “Colston Four” – the four people in Bristol accused of criminal damage to the slave trader statue.

He admitted responsibility for daubing the buildings with anti-racist comments, but denied seven counts of criminal damage at his trial claiming his actions were justified.

He also targeted the town’s memorial plaque to Uncle Mac, dedicated to James Summerson, who led a minstrel band in blackface who performed in the town in the Victorian era.

Among his graffiti scrawls were ‘Dickens Racists’, ‘Racism by the Sea town hall’ and ‘Uncle Mac Must Go’.

His defence rested on his claims that his actions were brought about by “informed duress” in which he feared minority groups would suffer immediate threat unless he acted.

Driver was not legally represented in court.

He said he was “inspired” by the Black Lives Matter protests and the toppling of the Edward Colston statue in Bristol following the murder of George Floyd.

He told magistrates: “At the time of my actions, councils were not complying with their legal duties under the Equalities Act.

“I had tried to reason with them but was getting nowhere and it shattered my belief in the democratic process. My actions were designed to bring about immediate policy change.

“It was peaceful and non-violent and morally and ethically justified. The damage was relatively minor and easily repaired.”

Driver, who is a former Citizens Advice Bureau manager and Labour and Green Party councillor on Thanet Council, added: “I think you have to look at the context of what I was trying to achieve against racially motivated crime.”

Magistrate chair Angela Moyles said: “We do not accept there was an immediate lawful excuse or believe it was done to avoid circumstances that could not otherwise be avoided.

“The crucial question is not whether the defendant’s actions were justified but whether he can be excused on the grounds that a reasonable person would have acted in the same way.”

In his mitigation, Driver asked the court to take into account the “excessive” 30 hours he was kept in custody after his arrest and the 268 days he spent tagged while on bail.

Driver was handed a two-year conditional discharge but must pay £1,400 in damages at the rate of £20 a month.

After the hearing, Driver said he was disappointed with the conviction but believed the court had been fair with him.

He said: “I always thought that I would be convicted because the defence I used is seldom successful.

“But my actions were prompted by my strong personal beliefs and they gave me a punishment which reflected that.”