“He is a hypocrite and can no longer be trusted as our leader and should resign as the country is not in the right hands," the pupil wrote. 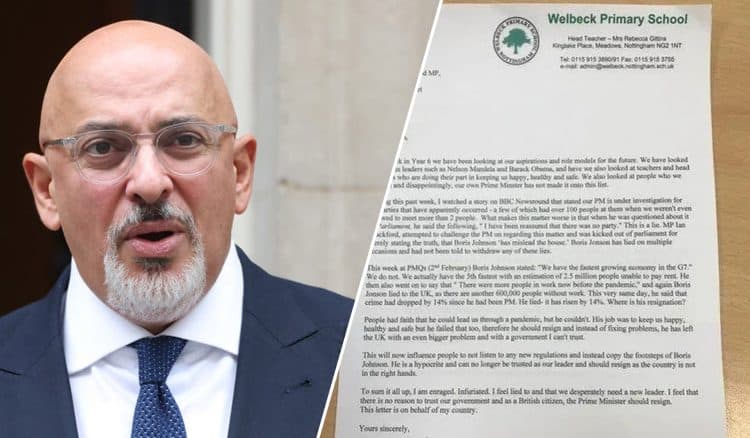 Education Secretary Nadhim Zahawi has condemned a lesson that took place in a Nottinghamshire primary school where Year 6 pupils were asked to write a letter criticising Prime Minister Boris Johnson.

The letter, written by Year 6 pupils at Welbeck Primary School in the Meadows, Nottingham, branded the Prime Minister a hypocrite and called for his resignation.

In images of the letter shared on social media, one pupil wrote: “This week in Year 6 we have been looking at our aspirations and role models for the future.”

“We have looked at famous leaders such as Nelson Mandela and Barack Obama and we have also looked at teachers and headteachers who are doing their part in keeping us happy, healthy and safe” it adds.

“We also looked at people who we respect and disappointingly, our own Prime Minister has not made it onto this list,” the letter says.

“Hypocrite and can no longer be trusted“

It goes on to refer to a BBC Newsround report watched by the pupil which stated that Mr Johnson was under investigation for 12 parties that have “apparently occurred – a few of which had over 100 people at them when we weren’t even allowed to meet more than two people”.

“This will now influence people to not listen to any new regulations and instead copy the footsteps of Boris Johnson,” it adds.

“He is a hypocrite and can no longer be trusted as our leader and should resign as the country is not in the right hands.”

Mr Zahawi said schools must not address political issues in a “partisan” way.

“While there is a clear need for schools to address political issues in the classroom from time to time, this must not be done in a partisan way. No school should be encouraging young people to pin their colours to a political mast,” he said.

The news comes following the Education Secretary’s intervention over the teaching of “concerning” theories around racism by Brighton and Hove Council.

Slides from race training given to teachers in Brighton and Hove schools leaked to the Sunday Telegraph said that “between the ages of three and five, children learn to attach value to skin colour: white at the top of the hierarchy and black at the bottom”.

Mr Zahawi said his officials were in contact with the council to investigate the materials, which he described as “concerning”.

Rebecca Gittins, headteacher at Welbeck Primary School, said: “As part of a democracy topic, the Year Six class has been looking closely at national politics, our leaders and decision-makers, while discussing fact and opinion.

“There is no ‘teaching’ of politics. We explain processes and structure, with the children encouraged to express their thoughts.

“Year Six pupils watched recent coverage on Newsround about Downing Street and some of them asked to write to their local MP to share their views.

“This lesson was linked to the English curriculum where children constructed letters using their skills to form arguments, assess evidence and develop their critical thinking.

“A tweet displaying the work received five abusive responses, which was really disappointing. The decision was quickly taken to remove it before these were seen by the pupils.”

“Vital part of any pupil’s knowledge”

Councillor David Mellen, leader of Nottingham City Council, said: “Learning about democracy, our political leaders and the way the country is governed is a vital part of any pupil’s knowledge, and has been taught, discussed and debated in schools across the country for decades.

“It remains a key part of the curriculum and, together with the council’s work through our Primary Parliament, helps to provide children with an appropriate understanding of the world they live in. We are supportive of Welbeck Primary’s work in this area and would never discourage young people from engaging with local representatives and politicians.

“Learning to write in a variety of ways is also a part of the curriculum and our schools strive to give children meaningful opportunities to exercise those styles.”