Commenters on Guido Fawkes have been accused of being so racist they create their own language to be antisemitic and get past the algorithms. Last night after right wing blog Guido Fawkes published a secret recording of a private Passover seder ceremony that Jeremy Corbyn attended to attack all those present for supporting the Labour leader, […]

Commenters on Guido Fawkes have been accused of being so racist they create their own language to be antisemitic and get past the algorithms.

Last night after right wing blog Guido Fawkes published a secret recording of a private Passover seder ceremony that Jeremy Corbyn attended to attack all those present for supporting the Labour leader, eagle eyed people started questioning some of the comments on the blog.

While the Jewdas organisation that the blog describes as “radical” has a history of actively fighting anti-Semitism, Guido still has a long way to go it appears.

These are but a few of the comments on the article they published criticising the politics of the Jewish community attending the Jewdas Passsover celebration which was then shared by Corbyn opponents including two Labour MPs. 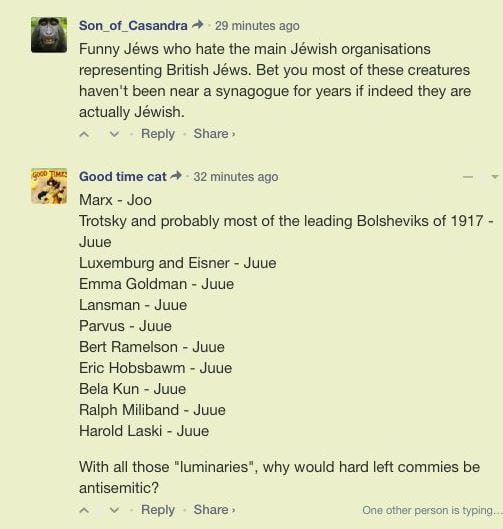 Guardian columnist Dawn Foster pointed out that people on the site use terms such as “Juue”, “Joo” and “J3w” in order to dodge algorithms.

One cited “leftie Jooos” in a comment and another used accents on the ‘e’ to post loaded responses.

The right-wing publication has found itself at the centre of Labour’s antisemitism brawl after it leaked a recording of Jeremy Corbyn at a Seder held by Jewdas in Islington.

According to the site guests shouted “f*ck capitalism” and booed the names of mainstream Jews at the event.

Uncritically accepting a story from a website so racist the commenters have created their own language to be antisemitic and get past the algorithms pic.twitter.com/15tOTVZlMO

Others pointed out why anti-Corbyn commentators who seek to prove that he is not fighting anti-Semitism might not want to share Guido Fawkes, whose publisher Paul Staines once wrote a song called “Gas them all” and as a young Conservative, wanted Conservative students to ally with banned racists the BNP to take “direct action” to disrupt meetings by left wing students:

Guido Fawkes, the man behind the Labour anti semitism smear once wrote a song: