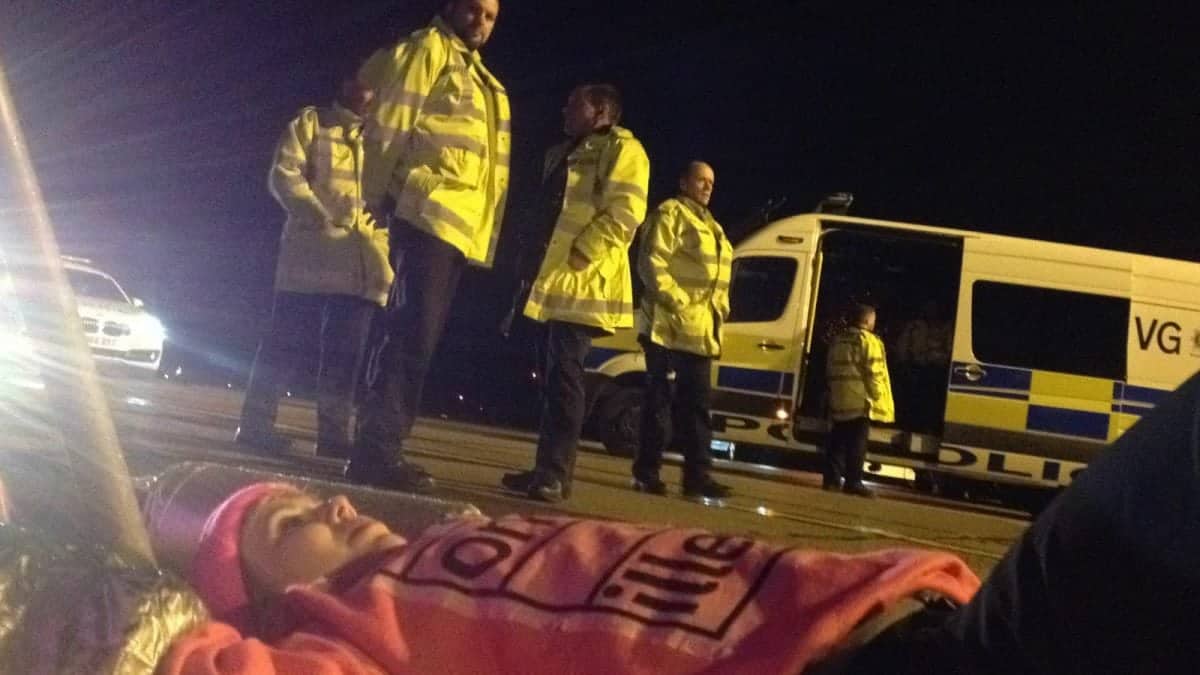 The activists in this unprecedented action said that there were asylum seekers on board the plane, and that the flight was returning people to countries where there lives are at risk as well as tearing families apart.

They insist that people with ongoing legal proceedings and a valid fear of persecution are returned among those shackled onto these flights. The Home Office’s own figures show last year over 50% of people who were put on charter flights were taken off thanks to last-minute legal challenges.

The Guardian recently reported on people being wrongly sent to Nigeria, some not even Nigerian nationals. And such cases are not unusual according to people in the asylum system and their lawyers.

One woman on the flight said: “My ex-husband said he knows I am being deported. He is waiting for me. He is planning to kill me. If he kills me – who will I look after my children? I have been in uk for 6 years. I had to leave Nigeria because I was scared of my husband. I was forced to marry him in an arranged marriage.”

Many of the people on the flight have expressed fears that they will be killed on return. One LGBT asylum-seeker said: “The present Nigerian situation is designed to kill gay people.”

Sam Jones from Lesbians and Gays Support the Migrants said: “For too long the government has kept these brutal mass deportation flights under wraps. The UK government is snatching people from their beds in the dead of night, handcuffing them and forcing them on to planes with no witnesses. I don’t think that’s the kind of society most of us want to live in. We must stop these violent mass deportations now.”

Some of the people on the flight have been residing for decades in the UK with established livelihoods, spouses and children, many of whom have not been able to afford the extortionate legal fees required to regularise their citizenship status in the UK since the government’s legal aid changes have put the financial onus of challenging the Home Office on individuals apart from pure asylum and certain human rights cases.

Alex Thompson from End Deportations – one of the groups who participated in the action that stopped last nigh’t flight said: “Like Trump’s Muslim ban, Theresa May’s mass deportation ‘charter flights’ are racist. These mass deportations target people based on the colour of their skin and their nationality. We must not stand by silently, while the Home Office attacks our neighbours, our colleagues and our friends.”

Since 2002 the Home Office has organised mass deportations- largely to former British colonies- every few months. Mass deportation flights are notoriously secretive and devoid of scrutiny, departing from undisclosed locations in the middle of the night. Every single deportee is escorted and shackled in a seat between two guards, who regularly employ the same violent restraints that caused the death of Jimmy Mubenga in 2010.

On a charter flight to Jamaica in 2016 men reported being treated ‘like animals,’ strapped with tight body belts and unable to move throughout the entire 9-hour journey.

To fill seats on the plane, large numbers of people are rounded up and detained before being sent “back”, in some cases to a country they have never even visited. “Reserve” deportees are taken to the airport to fill up the places of individuals whose lawyers are successful in making last-minute challenges. The people who are ‘reserves’ are not told whether they will be deported on the flight right up until they are either put on the plane, or the plane departs.

People are given little advance notice of their removal- often meaning they have just a few days to fight for their right to stay in the UK if they can afford the thousands of pounds that costs.

Mass deportation charter flights are part of Theresa May’s stated mission to create a “hostile environment” for immigrants. To this end, the UK government has pushed through a raft of policies which obstruct migrants from accessing the justice, education, health and housing services that they are by law entitled to use.

For more details on the secretive world of  deportation flight which have become a much criticised and regular feature of UK immigration policy: www.enddeportations.wordpress.com , @EDeportations &  #StopCharterFlights on Twitter & www.facebook.com/StopCharterFlights/ on Facebook.