Daniel Neagu, 31 is alleged to have driven into the cottages with a digger after claiming he was owed money for the building work 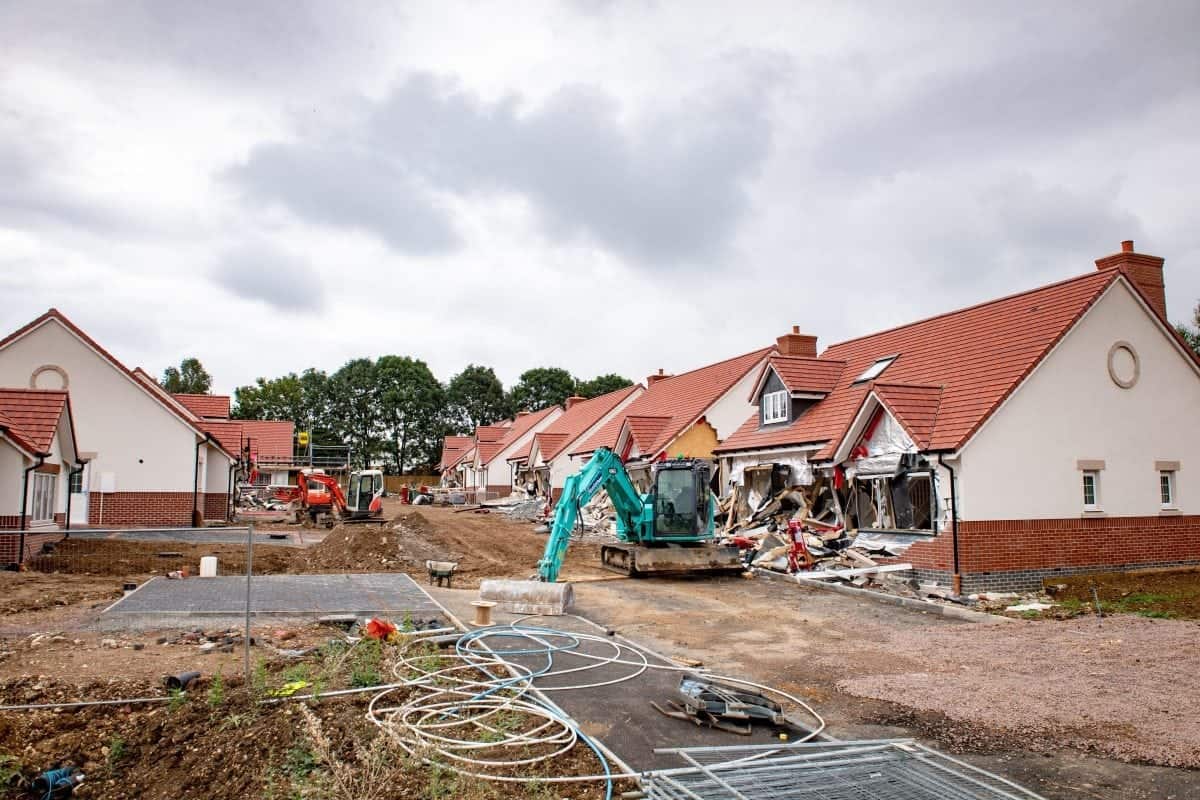 A builder caused £4m worth of damage to five new-build houses with a green company digger was left “disgruntled” over being sacked, a court heard.

Daniel Neagu, 31, was remanded in custody to appear before a crown court after he entered no pleas appearing at Hatfield Magistrates Court via video link from HMP Stevenage.

His defence lawyer claimed prosecutors’ “very primitive” estimated value of the homes had been “egged up” as he tried to get the grounds and heavy machinery construction worker released on bail.

The unkempt Romanian national from Harrow, north west London, spoke via an interpreter.

Neagu raised his hand as details of his alleged criminal damage against homes on a development site belonging to McCarthy & Stone Retirement Living in Buntingford, Herts., on Saturday were read out.

Prosecutor Elaine McMillan said: “The allegation is that the defendant has taken a digger, has gone on to a housing development site and has used the digger to damage five new build houses of estimated value between £4m.

“The background to this is that the defendant and some co-workers had been working on the building site and they have been sacked.

“They have left the site with a company vehicle and are told that any wages owed will be put on hold until the vehicle was returned.”

Neagu, raised his left hand, as the prosecutor opposed granting him bail and carried on: “The vehicle has a tracker and it’s been established that it’s in Romania.”

Sohail Bashir, defending Neagu, said: “It’s right that this defendant has become disgruntled with his former employers relating to non-payment of wages.

“The suggestion that the company vehicle has been taken without the owners’ permission is not accepted.Whilst I can see that the charge is a serious one, I’ve significant concern that the evaluation by the Crown has been egged up to make the charge more serious.

“What you have is a very primitive statement from the supervisor at the site who says the value of each of the houses, of the bungalows, would be a amount, multiply that by five gives you a value of £4m.

“The suggestion of £4m in reality, when you look at the facts is not going to stand up to what’s happened. That loss would be significantly lower to what the charge is at the moment.

“He has very strong community ties to the Harrow area. He lives in a fixed and stable address, his father lives nearby to him in Stanmore.”

Ms McMillan added: “There will be a structural engineer attending at the site to carry out an examination.”

The court heard Neagu had been working at the site employed by Fenton and he appeared nervous and held his face as he was denied bail.

She said: “We have considered this carefully. We have listened to everything that’ been said by the prosecution and by Mr Bashir on your behalf.”