"When you remember people who sat on some tarmac and caused inconvenience were sent to prison at the speed of light, it’s sort of astonishing Piers Corbyn is still out and about." 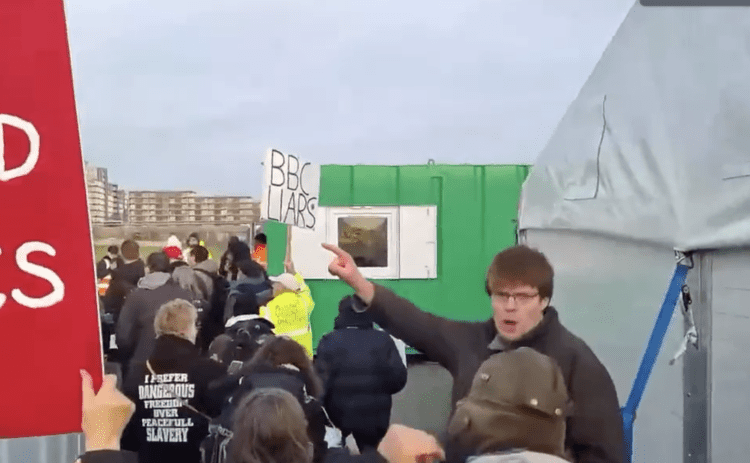 Anti-vaxxers led by Piers Corbyn and former UKIP candidate Jeff Wyatt have been criticised after ambushing a Covid test and trace centre and breaking into a theatre.

The protesters were caught on video while stealing health supplies, and appeared to harass health workers who were doing their jobs.

The CEO of the Milton Keynes NHS hospital where the ambush happened called out the incident, labelling the actions of those involved as “abhorrent”.

The mob could be seen holding placards saying “Boris lied, people died”, “no vaccine passports”, “freedom is not negotiable” and “don’t jab our kids”.

In one video, some protesters were seen throwing cones, taking signs down and shouting and chanting at staff ‘shame on you’.

Joe Harrison, CEO of Milton Keynes University Hospital, said: “I am very sorry and angry to see NHS colleagues at Milton Keynes Covid testing centre harassed and intimidated at their place of work.

“Our staff having to deal with increasing aggression and violence for simply doing their job. It’s abhorrent, unacceptable and we will not stand for it.”

And NHS doctor Rachel Clarke tweeted: “Imagine being so selfish – so convinced of your own righteousness – that you’d storm a test and trace centre, abuse staff working there, steal testing equipment, and dump it in a bin outside the centre. In a *pandemic*.”

Piers Corbyn is ‘not a harmless eccentric’, BBC reporter says

On the same day, a Freedom Rally was held in central Milton Keynes, where protesters could be seen breaking into a theatre and Piers Corbyn was spotted.

She said: ”When you remember people who sat on some tarmac and caused inconvenience were sent to prison at the speed of light, it’s sort of astonishing Piers Corbyn is still out and about.”

And Alistair Coleman, who focuses on disinformation at the BBC, tweeted a reminder that Corbyn is “trying to prod the International Criminal Court into trying the UK government for genocide, with a submission full of untruths and conspiracy theories”.

“He’s not a harmless eccentric,” he added.

Meanwhile, Jeff Wyatt, former UKIP candidate in Milton Keynes, gave a speech in front of protesters. He said:  “Great to see so many people here today in central Milton Keynes. My name is Jeff Wyatt, and thank you, this is my memo.

“When I was a little boy, in the early 70s this very ground was full of sheep. Ironic, isn’t it?”

Thames Valley Police said the force “is aware of an anti-vaccination protest that took place in central Milton Keynes this afternoon”.

It added: “Where criminal offences have been disclosed, we will take swift action and bring offenders to justice.

Related: Anti-vaxxers block-book appointments to prevent people from getting jabs