Detectives have launched an appeal after two men were arrested on suspicion of attempted murder following the attack shortly after 5pm yesterday (Tues). 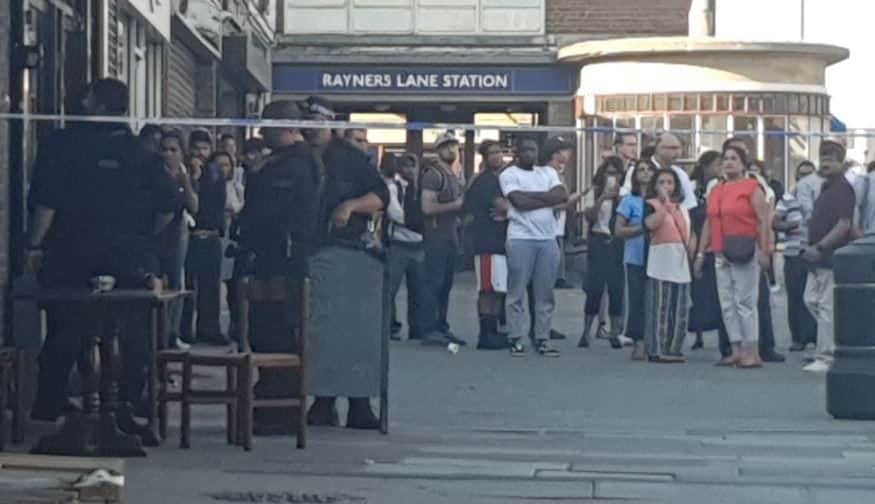 Gunmen injured two people after they opened fire near a London tube station last night less than 24 hours after a near-identical attack.

Detectives have launched an appeal after two men were arrested on suspicion of attempted murder following the attack shortly after 5pm yesterday in a possible copycat attack.

Two men were shot near Rayners Lane station in Harrow, roughly five miles from the scene of a shooting outside Kingsbury station on Monday night.

A Metropolitan Police spokesman said: “The two victims – aged 18 years and 24 years – were located in a fenced area nearby suffering from gunshot wounds.

“They were conveyed to hospital, neither is believed to be in a life-threatening condition.

“Two other men – aged 18 years and 25 years – were arrested near to the scene on suspicion of attempted murder.

“They were taken to west London police stations and have since been released under investigation.”

It is believed that a man fired shots with a shotgun point blank at another group of males before fleeing the scene with an accomplice on a moped.

Two other men – aged 18 years and 25 years were arrested near to the scene on suspicion of attempted murder. They were taken to west London police stations and have since been released under investigation.

Officers from the Trident Area and Gang Crime Command are investigating.

#Harrow #RaynersLane
UPDATE: 2 males were blasted with a firearm at point blank range from a male on a moped who had an accomplice as a pillion passenger.
2 suspects have been arrested on suspicion of attempted murder.

The 2 victims have been rushed to a Major Trauma Centre. pic.twitter.com/fdfchQNAqW

Armed police rushed to the scene followed by specialists from the Met’s Trident Area and Gang Crime Command.

The victims are understood to have been found in the garden of a property close to the station.

Police placed a cordon around the scene while detectives searched for clues.

Anyone who witnessed this incident or has information is asked to call Trident officers via 101 quoting reference CAD 5616/aug21.

On Monday two men, aged 18 and 24, and a 30-year-old woman were rushed to hospital after the Kingsbury shooting.

The woman was released shortly after while the men stayed overnight with non life-threatening injuries.

A gunman who shot the three people is being hunted.

Armed cops and paramedics found the woman, an 18-year-old youth and a 24-year-old man with gunshot wounds near the Zone 4 Jubilee Line station.