Poppy Bell-Minogue was born on the day of the 2013 London Marathon and was cradled in the arms of her mother Samantha, 34, as they watched the coverage in their living room 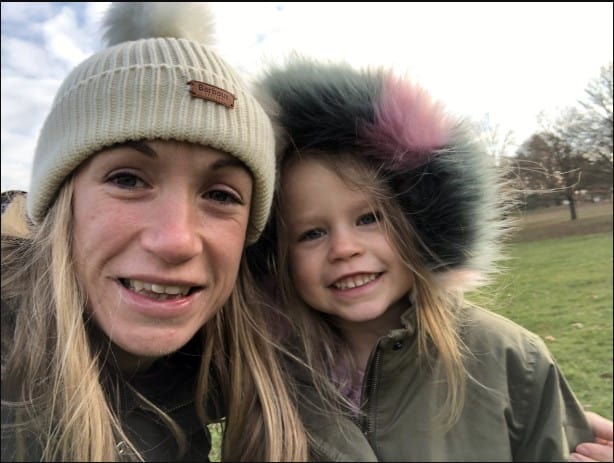 A mother ran the London Marathon today for her brave daughter who has battled a degenerative brain disease – exactly six years since the day she was born.

Poppy Bell-Minogue was born on the day of the 2013 London Marathon and was cradled in the arms of her mother Samantha, 34, as they watched the coverage in their living room.

Just nine months later Poppy picked up what at first appeared to be a normal cold.

However, the youngster’s health started to deteriorate rapidly and she lost the ability to sit up.

After suffering seizures, Poppy was rushed to a hospital in Derby where a brain scan revealed her myelin sheath – the coating of the nerves in the brain – had started to degenerate.

Her family were told it would be likely to continue and to prepare for the worst.

Despite the devastating diagnosis, Poppy continues to fight and has now “caught up with everyone her age”.

Samantha, 34, said she couldn’t wait to run the marathon in her name.

She said: “I always said that no matter what happened to Poppy, I’d run the London Marathon for her.

“We talk about it, she always asks when the marathon is and she’s really proud we’re supporting Sheffield Children’s Hospital, because it helps her so much.

“I’ve always dreamed one day I’ll run it with Poppy by my side and thanks to the care she has received, it’s closer than ever to being realised.”

Samantha described her distress at finding out about Poppy’s condition.

She explained: “She was just a normal, happy baby but she then started to go downhill, losing the ability to sit up and hold her head up.

They initially believed it to be an issue with her hearing or balance, but I knew something wasn’t quite right.

“Around her first birthday, Poppy started having seizures and becoming sick, so we took her into hospital.

“It was such a shock. The worst part was not knowing- not knowing the cause and then not knowing what the future would hold for Poppy.”

Doctors continued to test Poppy to discover the underlying cause, with one suggesting they test for a rare inherited metabolic disorder known as Maple Syrup Urine Disease (MSUD).

MSUD affects the way protein is broken down, causing amino acids to build up in the blood.

The build-up of these harmful chemicals can cause damage to the brain and delay normal development.

It is thought to affect just one person in every 185,000 worldwide.

Samantha added: “Although we were told it was very unlikely that Poppy would have it, the symptoms can be very similar.”

The tests came back positive, with further samples sent off to Germany to confirm the diagnosis.

Genetic testing revealed both of Poppy’s parents, as well as her older brother Charlie, to be carriers.

The family from Nottingham were then referred to the specialist metabolic team at Sheffield Children’s Hospital.

Thanks to the care Poppy received, her condition was able to be managed and her recovery began.

Samantha dded: “It took a while for the brain to start healing again, but she’s now caught up with everyone else her age.

“It’s not a simple process and she’s always going to be at risk, but Poppy’s here and that’s all that matters.”

Poppy’s protein levels require constant monitoring through blood tests to keep her healthy, with the youngster having to eat regularly and often.

She also has strict dietary requirements to reduce her protein levels, meaning she is unable to meat, fish or dairy products.

The family are in constant contact with the dietitians at Sheffield Children’s Hospital, who advise them what Poppy can eat and in what quantity.

Samantha added: “Poppy knows that she’s different, that she has to eat different things and at different times, but she just says she has a special tummy.”