Everyone knows how damaging booze, cigarettes and sun can be for your health and looks – but have you ever considered your iPhone should be added to that list? According to a recent study the average Brit checks their device 85 times a day, and spends five hours surfing the web and playing on apps. Alarmingly, […]

by Sarah Smith
in Beauty, Lifestyle 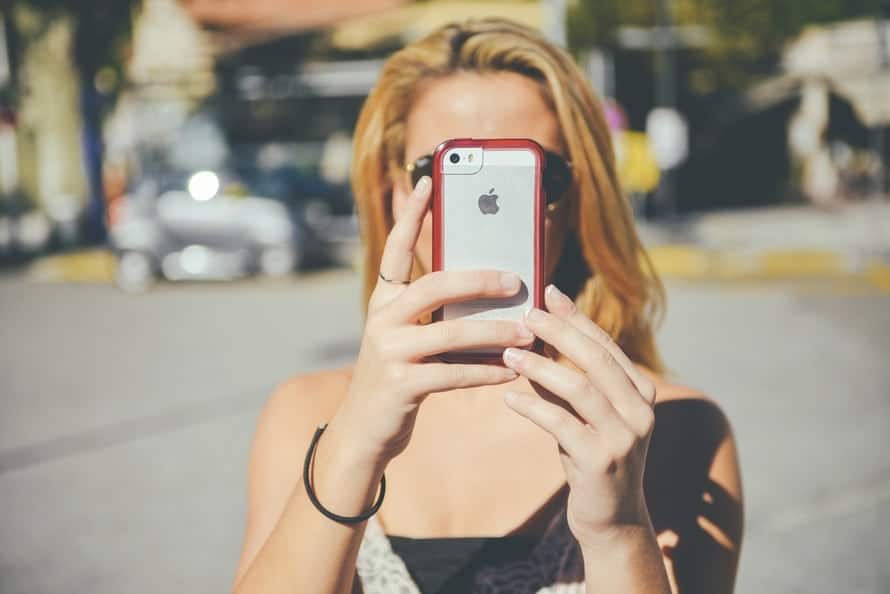 Everyone knows how damaging booze, cigarettes and sun can be for your health and looks – but have you ever considered your iPhone should be added to that list?

According to a recent study the average Brit checks their device 85 times a day, and spends five hours surfing the web and playing on apps.

Alarmingly, this adds up to an astonishing 5 hours a day – almost a third of the time we spend awake.

Sadly, I was one of those statistics. Every day, I’d spend hours yapping, texting, emailing and scrolling through the social media feeds on my phone.

So much so, my boyfriend called a ‘phone ban’ in our bedroom. Now, we switch off our phones and dedicate half an hour each evening to – er – reading – (or whatever!) before ‘lights out’.

But apart from wasting valuable time and killing conversation and romance, what are the other problems our iPhones are causing us? Quite a lot, actually – both physically and mentally. Georgina Charalambous, from ARK SkinCare salon in Putney, London, tells how they are now offering an iPhone facial treatment to combat the adverse symptoms these modern day devices cause.

She said: “We created the iPosture Facial and Massage to combat the physical ailments associated with computer and smartphone use. Our generation is constantly looking down at our phones or laptops, especially on the trains in to work every morning, which can cause the neck to strain and fine lines to develop.

“Massage is incorporated into the iPosture protocol to help combat the neck strain and to firm the skin. After a long day working we are still on our phones before bed time, staying up late texting, emailing or checking the latest news.

“The brightness of the phone at this time of the evening can strain the eyes leading to redness and puffiness from lack of sleep. Lymphatic drainage around the eye area helps to alleviate the symptoms of these late nights soothing the skin around the eye area and reducing puffiness. People don’t often realise how many germs their phones carry, these germs are transferred to our cheeks when making phone calls leading to blemishes and breakouts. A deep cleanse morning and night is one of the most vital steps in our daily beauty routines and the cleanse during the iPosture Facial can support that further leaving our skin squeaky clean and germ free!

Georgina explains how since they launched the treatment after clients were complaining about eye ache and neck pain, and now it’s one of their most popular treatments.

“People are aware about the dangers of going out in the sunshine without sunscreen,” she added, but they do not realise the effect technology is having on their health until they inevitably start experiencing problems.’

But it’s not just the physical ailments addiction to our smart phones can cause. A study carried out by Nottingham University last year concluded that phone addicts can end up feeling lonely, depressed and experience paranoia, because they spent too long on their phones and retreat from the real world. As a self-confessed iPhone addict, I found the treatment wonderfully therapeutic and would greatly recommend it.

My skin felt rejuvenated, fresh and firm and I felt like I’d undergone a mini face lift.

Now, to avoid my phone directly touching my face I no longer hold it to my ear and pop in my earplugs instead to talk.

I’ve also limited myself to one hour of internet browsing a day and have left all Watsapp groups and deleted social media from my phone.

What’s more, when my 24 contract is up with Vodafone in September I am going to ditch my iphone 6 and opt for a trusty NOKIA 3210 instead…let’s just hope I can stay off snakes!