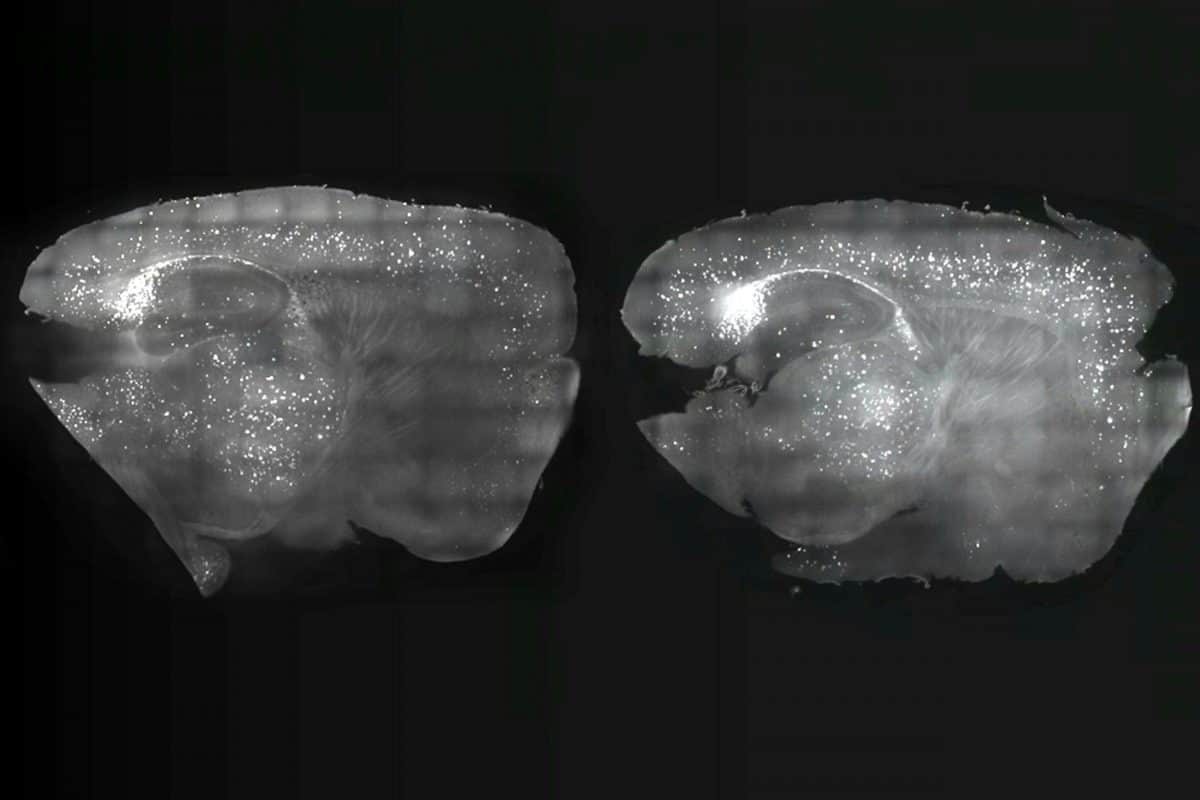 Alzheimer’s disease could be treated by combining light and sound therapy, according to new research.

The study showed that the non invasive treatments boosted memory by destroying rogue proteins in the brains of mice.

Scientists are hopeful the approach, which works by inducing brain waves known as gamma oscillations, will be just as effective in humans.

Patients with early-stage Alzheimer’s are already being enrolled for the first clinical trial of its kind.

Experiments found it boosted the abilities of lab animals genetically engineered to develop mental problems similar to those seen in people with dementia.

Both the visual and auditory therapies led to improvements when applied individually – but results were even better when given together.

The findings, published in the journal Cell, could revolutionise the treatment of dementia.

Senior author Professor Li-Huei Tsai, of the Picower Institute for Learning and Memory at MIT (Massachusetts Institute of Technology), said: “When we combine visual and auditory stimulation for a week, we see the engagement of the prefrontal cortex and a very dramatic reduction of amyloid.”

It lies at the front of the brain and controls executive function – a set of mental skills that helps us get things done. In Alzheimer’s, it is among the first things to go.

Plaques were cleared in large swaths of grey matter, including areas vital for learning and memory.

Her team has performed preliminary tests of this type of stimulation in healthy human subjects and showed they are safe.

The next step is the clinical trial to see if the technique produces similar benefits for patients.

Prof Tsai said she is now beginning to recruit Alzheimer’s patients for the dual visual and auditory treatment.

These can be from 25 to 80 hertz, or cycles per second, and are believed to contribute to mental functions such as attention, perception and memory.

Three years ago Prof Tsai’s team discovered the beneficial effects of restoring gamma oscillations in the brains of mice genetically engineered to develop a rodent form of Alzheimer’s.

In that study, the researchers used light flickering at 40 hertz, 40 times a second, delivered for one hour a day.

They found this reduced levels of beta amyloid plaques and another protein tau that can cause Alzheimer’s by developing into tangles.

The treatment also stimulated the activity of immune cells known as microglia that clear unwanted debris from grey matter.

But these improvements were limited to the visual cortex. The latest study published in Cell found exposure to an hour of 40-hertz tones daily, for seven days, dramatically reduced the amount of beta amyloid in the auditory cortex, which processes sound.

And it had the same effect on the hippocampus, a key memory site located near the auditory cortex.

Amyloid plaque is one of the hallmarks of currently incurable Alzheimer’s. The sticky build-up is thought to lead to the progressive destruction of neurons – and dementia.

Prof Tsai, a founding member of MIT’s Aging Brain Initiative, said: “What we have demonstrated here is we can use a totally different sensory modality to induce gamma oscillations in the brain.

“And secondly, this auditory-stimulation-induced gamma can reduce amyloid and tau pathology in not just the sensory cortex but also in the hippocampus.”

The researchers also showed after a week of treatment the mice performed much better when navigating a maze requiring them to remember key landmarks. They were also better at recognising objects they had previously encountered.

The sound therapy also induced changes in not only microglia, but also the blood vessels, possibly facilitating the clearance of amyloid.

The researchers then decided to try combining the visual and auditory stimulation and, to their surprise, found the dual treatment had an even greater effect than either one alone.

Amyloid plaques were reduced throughout a much greater portion of the brain, including the prefrontal cortex, where higher cognitive functions take place. The microglia response was also much stronger.

Prof Tsai said: “These microglia just pile on top of one another around the plaques. It is very dramatic.”

But if they treated the mice for one week, then waited another week to perform the tests, many of the positive effects had faded.

This suggests the treatment would need to be given continually to maintain the benefits.

In an ongoing study, the researchers are now analysing how gamma oscillations affect specific brain cell types, in the hope of discovering the molecular mechanisms behind the phenomena they have observed.

Prof Tsai also hopes to explore why the specific frequency they use, 40 hertz, has such a profound impact.

Alzheimer’s and other forms of dementia effect about 850,000 people in the UK alone, a figure set to rise to 2 million by 2050 because of the ageing population.