In 2004 a group of native Londoners pooled their expertise to create an ultimate guide to the capital, pointing out the places that must be seen and those that should be avoided. Included as the fourth of five tips filed under the latter category was “never, ever eat at an Angus Steak House”. It may […] 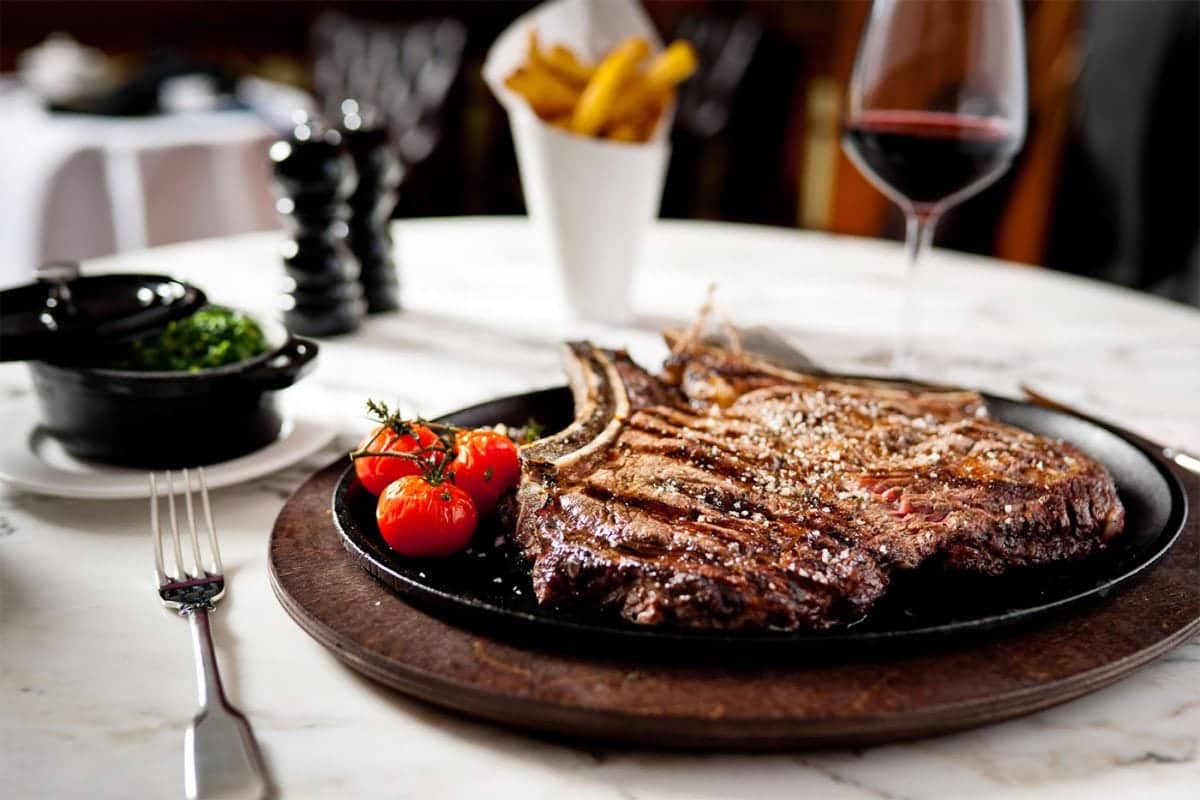 In 2004 a group of native Londoners pooled their expertise to create an ultimate guide to the capital, pointing out the places that must be seen and those that should be avoided. Included as the fourth of five tips filed under the latter category was “never, ever eat at an Angus Steak House”. It may seem like an appropriate British treat, but as David Mitchell was to point out later, only because we have a “proud heritage of serving shoe leather with Béarnaise sauce to neon-addled out-of-towners.”

The lure of Aberdeen Angus steak to London tourists seems to rival that of pushing train station trolleys through walls, confusing Tower Bridge for London Bridge and proudly sporting M&M bags for visitors to the capital these days. Quite why that is, given that steak to most central London restaurants often equates to culinary maltreatment of the highest order, is beyond me. But if British meat in a British setting is what you’re looking for you could do a lot worse than sampling the delights of Gillray’s Steakhouse on the banks of the River Thames.

Sat in the shadow of the Millennium Eye and with lofty views over Westminster and Big Ben this is a restaurant that feasts on its local surrounds with large, imposing windows that offer an immersive dining experience.

Their food and drink offering also pays homage to the best Britain has to offer, with fish sourced from Billingsgate Market, meat from O’Sheas Butchers, fruits and preserves from Tiptree Farm in Essex and Clarence Court Eggs from Cornwall. Aberdeen Angus steak is sourced from English farms of the highest quality and their bar is stocked with no less than 100 gins and a wide selection of beers, wines, and spirits. A far cry from whatever sugary concoction you will be forced to indulge in in the aforementioned eatery. 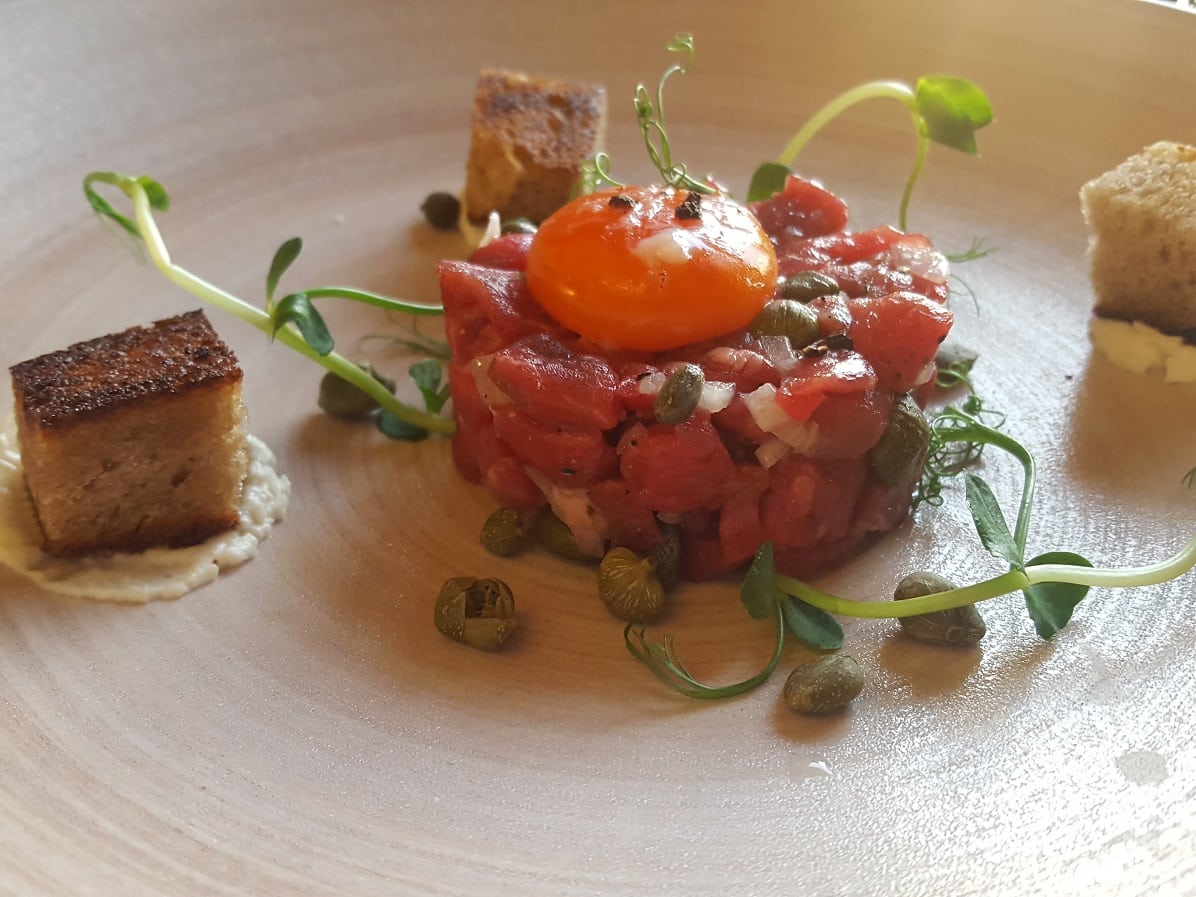 And where most central London steakhouses can muster little more than an ill-conceived selection of deep-fried entrees, Gillray’s menu shouts locality and seasonality. Mushrooms sourced from the New Forest go in to a soup, seasonal game goes into a terrine and Bramley Apples and walnuts go into a savoury strudel. Oysters served with a Champagne and shallot dressing are also worthy of note, as is the Ham Hock Fritters served with garden pea porridge and piccalilli which screams Britishness. 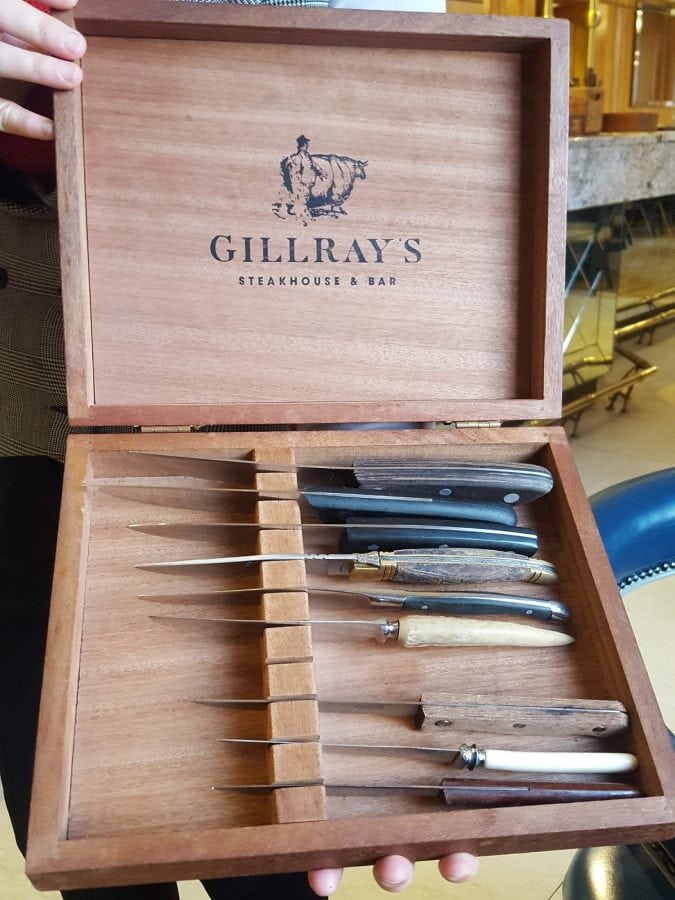 The thought of the proceeding 35 day dry aged Aberdeen Angus steak is a mouth-watering prospect, but first up comes an almost ceremonial “choosing of the knife” affair, which is a real touch. A selection of varied knives are presented to you in a wooden box ranging from fierce to fancy and everything in between. Each has ornately carved handles that add a personal element of prestige to an already glamorous affair.

The steaks themselves – generous in size and cooked to a strict cooking chart – are served with bone marrow and confit vine cherry tomatoes along with a sauce of your choosing. The home-made bacon chilli sauce is divine and adds a layer of complexity to the dish, but all other common culprits are available for those who are used to a red wine, Oxford blue, peppercorn or Bearnaise with their steak. A good list of sides are available to complete the dish, with Granny Smith Apple Mash Potato, Rosemary Roasted Parsnips and Cauliflower & Truffle Bake among the notable options. 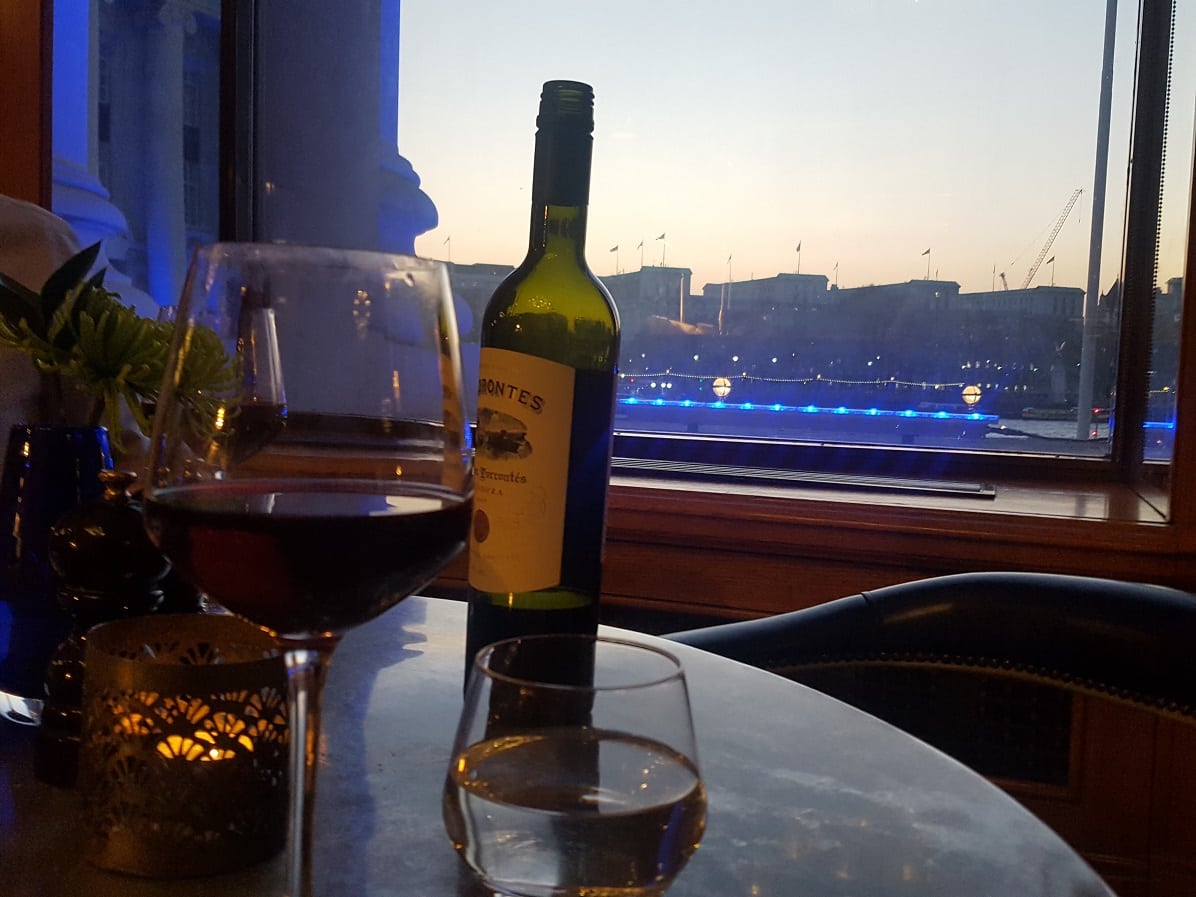 A good desert menu can also be found, but for those looking to cap off the night in style a perusal of the whisky menu is a must. The selection doffs its cap to the best Scotland has to offer in the same way the food menu celebrates the best culinary picks on these small Isles. A real treat.