By Leslie Byron Pitt @afrofilmviewer The first question which left my lips after viewing The Wailing was a simple one? Why so Long? Na Hong-jin’s (The Chaser, The Yellow Sea) third feature is by no means a bad movie. Far from it. Like many of the more successful Korean exports the West have managed to […] 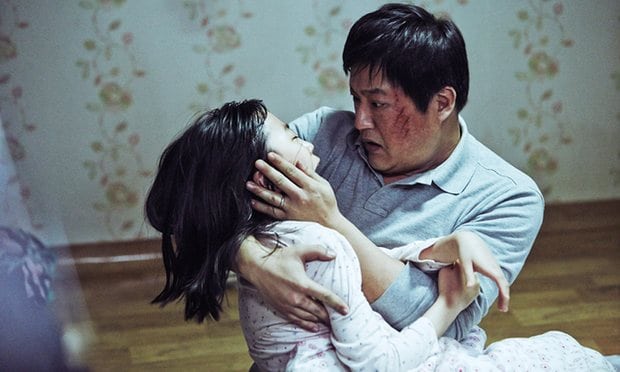 The first question which left my lips after viewing The Wailing was a simple one? Why so Long? Na Hong-jin’s (The Chaser, The Yellow Sea) third feature is by no means a bad movie. Far from it. Like many of the more successful Korean exports the West have managed to experience, The Wailing is an often-successful tonal mix of styles which happily shifts and contorts itself around whatever the expression the scene thinks would suit best. One moment it’s a broad, amusing farce, the next it’s a haunting which aims to tingle the spine. There is no issue with this. It’s one of the reasons why Korean cinema is fascinating.

Despite this however, there is too much of The Wailing for its own good. The angle the film takes on hauntings and possessions is an interesting one. Where a film like The Exorcist (1973) targeted the middle class with its bombastic effects, Na Hong-jin minimises the FX and pulls the focus down a class bracket. Located in a small, poor village, the film’s protagonist; a slack-jawed, clumsy local cop; Jong-goo (a sometimes delicately balanced Kwak Do-won), steals precious moments of downtime having sex with his wife in the back of their car, as there’s clearly not enough space in their home. When he’s not quarrelling with his mother (who also lives with them), he is trying to solve the troubling spate of group murders in the village. Each slaughter is committed by one of their own family members. When found, the culprit appears to be drugged and is covered in boils.

At first the murders are considered to have the involvement of magic mushrooms, but as Jong-goo delves deeper, we soon realise that something far more sinister is apparent. The Wailing does malevolent well. It’s not long before Jong-goo is soon covering under desks from shadowy demon figures. Much of this is all very well directed by Na Hong-jin, who displays a wonderful command of tone. As we shift from farce to fearful, the film never jerks or lurches. The film also gets that less is more when it comes to tension, and its supernatural aspects never rely on the type of contrived gimmicks that litter films with lesser imagination.

When it comes to narrative length however, The Wailing becomes something of an endurance test. With a running time of over two and a half hours, The Wailing doesn’t have as much to say as the running time suggests. Once we arrive at the film’s third act, the film’s final twists, while enjoyable, become unremarkable. The issue isn’t melancholy feelings that rouse from the revelations that occur, it’s that the time taken to reach these developments do little to reward the viewer. The Wailing certainly gets high marks for its focus on family at the peak of desperation, however, those looking for cheap thrills which are less methodical in its execution should perhaps head elsewhere.

The Wailing is out on DVD on Monday 23rd January.