One of the strengths of the series since the pilot episode has been the characterisation of not only our regular band of misfits, but also the ancillary characters that prop up the world of Annville. ‘Monster Swamp’ sees Jesse fade into the background, in favour of fleshing out the side characters and the writing team […] 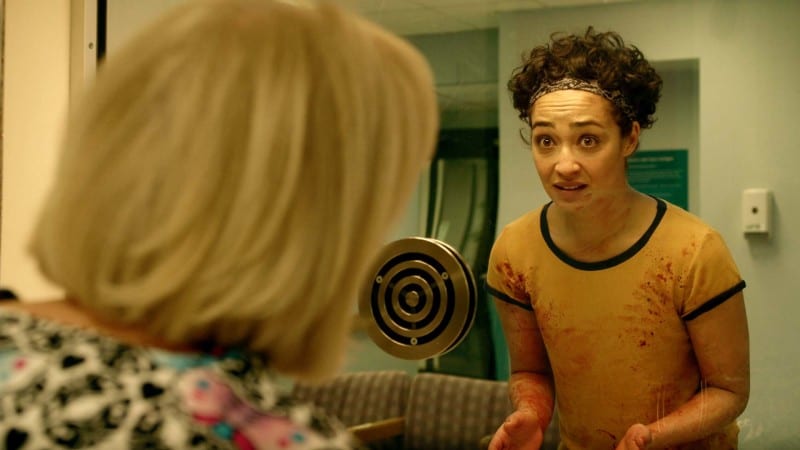 One of the strengths of the series since the pilot episode has been the characterisation of not only our regular band of misfits, but also the ancillary characters that prop up the world of Annville. ‘Monster Swamp’ sees Jesse fade into the background, in favour of fleshing out the side characters and the writing team does this admirably – continuing to weave the webs that connect the members of this community.

The episode opens with imagery that wouldn’t be out of place in a psychological horror film you’d happily drop £10 to see in your local cineplex. It expertly ramps up the tension; a young woman – scantily clad of course because you know, tropes – runs through the neon lit streets, hunted by armed men. She makes it into a field before being confronted at gunpoint. It turns out that this ‘weapon’ is simply a paintball gun. The woman, a worker at the brothel glimpsed in prior episodes. However this bizarre game ends disastrously when the ground opens up at her feet, swallowing her.

The lackadaisical reaction of her fellow sex workers and the local law enforcement enrages Tulip. It’s brushed to the side – a risk of the job they say. What follows is some exposition further giving background to Tulip – the Madame of the brothel has known her since she was an angry young child. It turns out her mum was a sex worker at the ‘hotel’. Ruth Nega does a fantastic job, playing it off like she doesn’t give her past much thought, whilst holding a simmering rage at bay. This culminates in a hilarious escapade seeing poor Cassidy accidentally getting on the wrong end of her violent tendencies. He’s a real opportunist that vampire.

Speaking of Cassidy, he once again gets the best comedic beats of the episode acting as the middleman between Fiore, DeBlanc and their target – the Preacher. Fiore is quickly becoming my favourite character evoking the literal Drax from Marvel’s Guardians of The Galaxy. He takes everything at face value and pulls no punches when describing what he intends to do to Jesse in order to reclaim his new found powers. In fact, the show is really beginning to bring me around to its slow burn approach in terms of revealing the nature of this twosome and just what they’re doing on earth. What was dealt with in a few pages in the comic is unravelling at a much slower pace here, but it simply works. An excellent example of mining the source material whilst not treating it with such reverence it becomes suffocating for the writers of the show.

This aired on Fathers Day weekend and it seems fitting that we finally get to spend some time with Jesse’s deceased father, courtesy of flashbacks. Though brief, its clear that their relationship was a tumultuous one – with Jesse beaten in front of his friends for not being the shining example he should. On the surface it seems to be a classic case of the son rebelling in the face of his inability to live up to his pious father. More interesting though, is his father’s relationship with Odin Quincannon – we see a young Jesse get taken to Quincannon’s offices by his preacher father. Whilst we don’t see what goes on past those doors, it’s intriguing to discover that Jesse and Odin are intrinsically linked by their pasts. The power hungry Quincannon has been positioned as the villain of the series and considering the events of this episode, it will be fascinating to see where their relationship goes from here.

There are tensions building in Annville and it’s testament to the writing team that the titular Preacher isn’t involved in all of the plot threads. We peer into Emily’s personal life with this episode and find two major revelations – she is a single mother and has an intimate relationship with the Mayor. The same Mayor who seems unable to bring Odin Quincannon into line. The same Odin Quincannon that Jesse seems to have a deeply personal relationship with. You see where I’m going with this, right?

Like a rickety Jenga tower, Annville is built on the strange and strained relationships of those that reside within. As we hit the mid season mark, it seems the writers are gleefully tugging at the tower one block at a time – I wouldn’t like to be Jesse when it all comes tumbling down.