“This movie is not an autobiography, but a fictional dramatization based on true characters and real events.  Facts and fiction have been mixed.  Scenes, dialogues, emotions, and thoughts of the characters reflect the maker’s imagination and should not be confused with reality.”  So begins Koen Mortier’s latest feature, Angel. Err…excuse me?   This is the […] 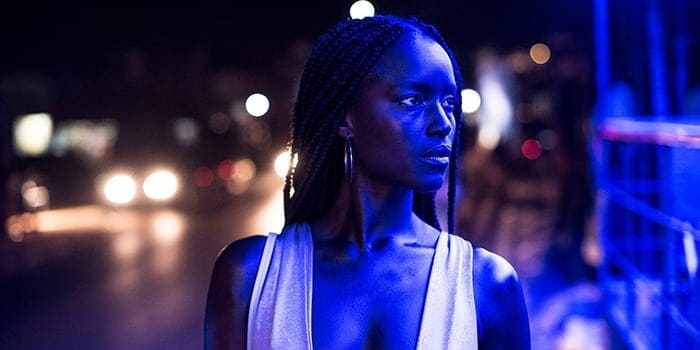 “This movie is not an autobiography, but a fictional dramatization based on true characters and real events.  Facts and fiction have been mixed.  Scenes, dialogues, emotions, and thoughts of the characters reflect the maker’s imagination and should not be confused with reality.”  So begins Koen Mortier’s latest feature, Angel.

This is the truly bizarre start to a film that slips and stumbles its way through its 104-minute runtime.  Koen Mortier, who wrote the script based on the Dimitri Verhulst’s novel, ‘Monologues of Someone Accustomed to Talking to Herself’, with inspiration also taken from his own conversations with a Senegalese prostitute, and the death of Belgian cyclist Frank Vandenbroucke, is clearly putting his hands up and saying, “It’s true, but just so I don’t get sued, I made a lot of it up, too.”

From here we travel down the well-worn path of subpar art-house fare: tortured boy needs saving by exotic, downtrodden girl.

Thierry (Vincent Rottiers) is a world-class cyclist and a bit of a bastard with a self-destructive bent.  It’s okay though, we’re made to believe, because he’s really just struggling under all the pressure as he was recently discovered to have cocaine in his system after a competitive cycling accident.  So, needing to get away from it all, he packs a bag and makes for the sunny shores of West Africa’s Senegal with his brother, Serge (Paul Bartel).

Simultaneously we are introduced to Fae (Fatou N’Diaye), a Senegalese prostitute who whiles away her evenings picking up Toubabs (white men) down the local discothèque, The African Queen.  Her life too is one of hardship and decidedly of a much more believable kind.

Mortier attempts and struggles to draw comparisons between how both Fae and Thierry are kindred spirits in that they are both prisoners of their bodies.  Except, one uses theirs to win championships, medals & presumably enough money to buy a last minute flight to Senegal, and the other as a way to make ends meet.

On the night of Thierry and his brother’s arrival, the two rack rails of cocaine, get geared up and hit the town where they cross paths with Fae and a friend.  Understanding they are prostitutes they fling out some cash (that’s not even 10 euros” they remark) to spend the night with the women.

While Serge disappears back to his hotel with Fae’s friend in tow, Thierry and Fae stay together.  There is a (non-)electricity between them, and they quickly fall in love.  Thierry promises the world to Fae.  Summers in Belgium, winters in Senegal, a palace on the beach and happiness.  At this point, you begin to wonder whether Mortier is playing it straight or offering up some sort of post-colonial critique. Sadly, one feels it’s the former.

Theirry’s decisions eventually leave Fae in a compromising position with possible serious legal consequences and to say more beyond this would be to throw the film.

This is a terribly clunky script, confused and lacking any sensitivity.  Scenes unfold only to fold in on themselves and rely heavily on characters that are so thinly drawn they feel almost transparent.

The chemistry between the two central characters is non-existent.  Thierry feels like a whiny, privileged, white boy prone to tantrums and aggressive outbursts all fuelled by his addiction to drugs.  Amidst it all we are supposed to believe that in Fae, Thierry has found someone, whose experiences as a prostitute, ground him.  But, the whole relationship feels one-sided, gratuitous and exploitative, founded on the outdated premise that a brush with “the other side of living” brings clarity.  Thierry’s suffering is impossible to sympathise or empathise with.  He is a truly grotesque character.

Angel’s saving grace is its cinematography, beautifully shot by Belgian maestro Nicolas Karakatsanis (also behind the camera for Bullhead and I, Tonya).  His confidence and ability are on display here, and there are moments of such ethereal, neon-drenched beauty that for a moment you forget what you are watching.  Sadly though, only for a moment.