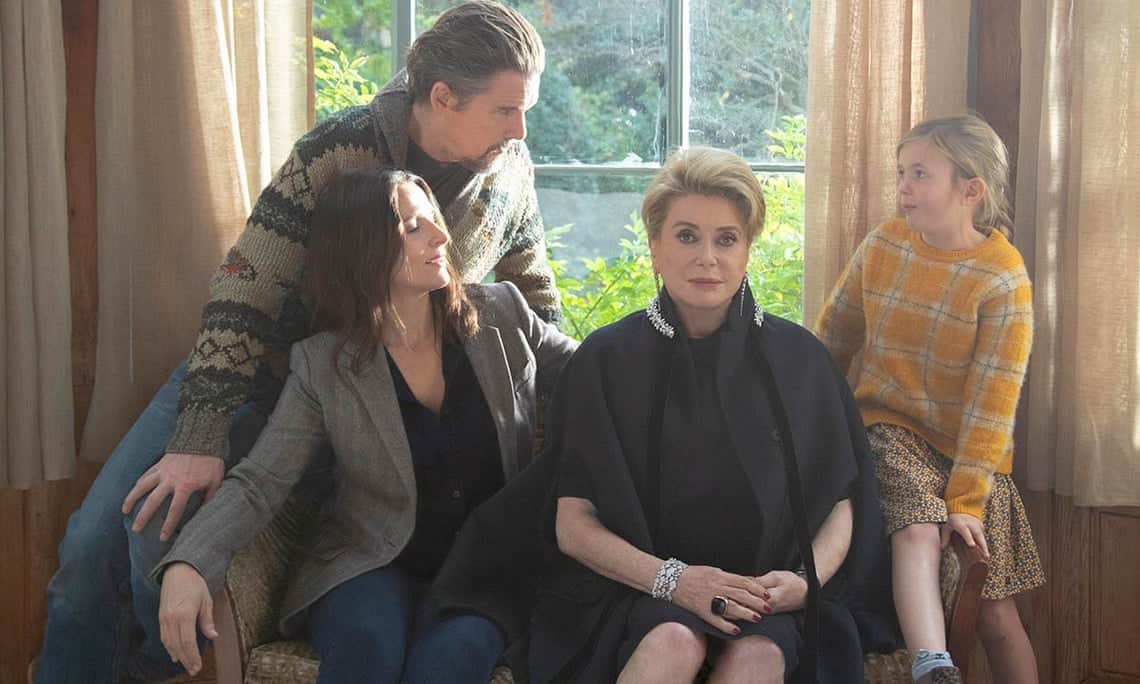 When beloved international filmmakers change country and language the resultant films can often
be disappointments. When French auteur Jacques Demy moved across the Atlantic to make Model
Shop the magic that made The Umbrellas of Cherbourg and The Young Girls of Rochefort so special
was lost. Agnès Varda, Demy’s wife who moved to Los Angeles with him, later said of Columbia
Pictures’ influence on the film: “They killed it.”

At first it feels as if everything is a little out of place in Hirokazu Kore-eda’s latest film The Truth. It is
not set in the director’s native Japan, the casting seems forced and too meta, and each scene is
dispersed with a surprising amount of broad and gentle humour. It can initially feel like the traits
that have defined the filmmaker’s career have been muddled and moved around.

Kore-eda’s films can often feel like a cinematic magic act, where simple and understated stories are
transformed into all-consuming and deeply emotional humanistic studies. When Kore-eda won the
Palme d’Or in 2019 at the Cannes Film Festival for his film Shoplifters it was recognition to a career
spent observing the seemingly mundane, searching for the transcendental, and depicting the
everyday with a rare richness.

In contrast, The Truth centres around Fabienne (Catherine Deneuve), a French film star who fears
her greatest roles are behind her. When her daughter Lumir (Juliette Binoche) and her American
husband Hank (Ethan Hawke) visit her Parisian home it isn’t long before lifelong resentments
resurface.

The casting of Catherine Deneuve as an icon of French cinema takes some time to get used to. At
first it can feel like an obvious and unimaginative choice where the legend of Deneuve is never far
from your mind, but with each scene the presence of Fabienne grows and the film itself becomes
increasingly assured. By the closing credits Kore-eda and his distinguished cast have pulled you into
their charming and mannered world.

Kore-eda has long been compared to fellow Japanese filmmaking Yasujirō Ozu, but his latest film
seems to tap into a different tradition. The Truth has a lightness and humour that reminded me of
the work of Jean Renoir, Olivier Assayas, and the mid-career films of Éric Rohmer.

Where Kore-eda’s previous films Shoplifters and Like Father, Like Son explored the limits and
boundaries of family, The Truth takes a different perspective and is more interested in showing how
decade old resentment can be overcome. Much of the film is devoted to the past, with Fabienne and
Lumir describing at length moments from earlier in their lives. Often they have very different
perceptions of events that define their relationship. Through communication and time spent
together the divide between them starts to narrow. The truth is seemingly less important than the
effort made to try and understand each other.

At one point Fabieene tells her granddaughter that she has magic powers and jokes that she has
turned her ex-husband into a turtle. It turns out the real magic trick is the ability for people to come
together despite the pain that they have experienced.

The Truth may not rival the very best films that Kore-eda has directed but it is a generous drama that
is a heart-warming reminder that it isn’t too late to rewrite memory and smooth its rough edges.