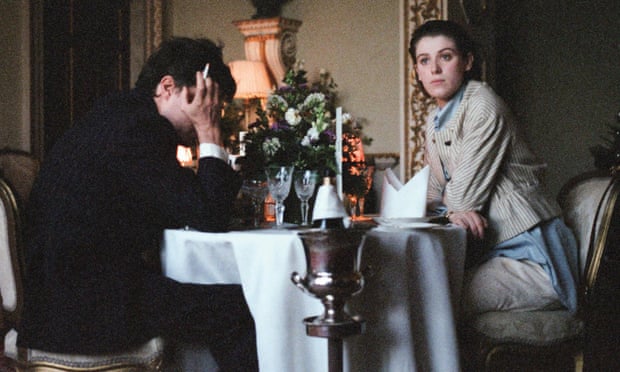 The Souvenir is titled after a painting by Jean-Honore Fragonard of a young girl, named Julie, carving on the trunk of a tree whilst her attentive pooch looks on. Another, Julie (Honor Swinton Byrne) is taken by her beau Anthony (Tom Burke) to see this painting at the Wallace Collection, in this sleeper autobiographical tale by director Joanna Hogg about a troubled relationship in her youth. Like the chipping away at the tree bark, through the layers and layers of sophisticated subtle self-reflection emerges an awakening, forever blemished by permanent scars.

Julie is an affluent student in her early twenties. Residing in her parent’s pied-a-terre in Knightsbridge, they live in a grand old country house in Norfolk. Attending film school, hosting get-togethers with friends, drinking, pot smoking, her mum Rosalind (Tilda Swinton) occasionally pops in for a cuppa, dropping off a lampshade or a bag of groceries. We find Julie amidst a bourgeoning courtship with Anthony (Tom Burke) . Their dating is reminiscent of a by-gone era, slow and cordial, spending numerous nights in the same bed, but abstaining from having sex. Anthony is your stereotypical public-school boy, arrogantly charming. Decked out in pinstripe suits, a junior at the Foreign Office, but with an incomprehensible lackadaisical air. Soon enough needle marks on his arms confirm what audiences may already be suspicious of.

Julie remains oblivious, until a revealing dinner with one of Anthony’s rather irritating and acerbically camp friends, (played by Richard Ayoade), drops the bomb. The story turns a corner, as Julie finds herself disengaging from her own world, slowly engulfed by Anthony’s. Her innocence amalgamates into sombre awakening, navigating the trappings of dating an addict. Finding herself in countless dubious situations; driving him to buy drugs, abandoned for days on end as he goes off on drug binges, stealing all her jewellery, trashing her flat under the duress of a withdrawal symptom and for it all to reach an inevitable tragic crash.

The Souvenir could be seen is an observational study of the upper class, but not in any way glamorising or aspirational, put more in the day-to-day banalities of a cushy life, portraying a more tasteful eighties with what we are accustomed to. Expensive furniture, likely bought from Harrods across the street, stylish garments acquired through travel, lush opulent tea rooms and first-class train carriages to Venice. And then for it all to be disrupted by the presence of a class-A drug.

There’s a cosy and warm aesthetic, scenes are brushed with a hazy sensation and pervasive muted tones, aligning itself to Anthony’s heroin fog; attributed to the contemplative and restrained eye of cinematographer David Raedeke. The pace of the film follows a similar restrained fashion, events delicately bubble to the surface and then subside in an ever-evolving continuous motion, also as if mirroring Anthony’s highs and lows.

Burke’s performance is flawless, absorbing and annoying in equal measures, for as much of his manipulation of Julie but equally for his entitled behaviour. His pompousness and misguided self-aggrandising even when filtered through layers of permanent inebriation are so articulately conveyed that it’s simply captivating. He pins down Julie exactly where he wants her, playing on her insecurities, trapping her into a sense of obligation. Perpetually loafing on her, a tenner here and there as he goes off to score. Things get even more cringe worthy as the Home Office job becomes a distant memory, and he starts to hand over the bills for her to pay, looking the other way to avoid the demasculinizing embarrassment.

Byrne’s Julie is a quintessential English rose. Shy, endearing, earnestly naive, before Anthony’s unpleasantness, they were characteristics never seen as shortcomings or a cause for self-reflection. Hogg goes out-on-a limb in portraying Julie as a fully-fledged victim, shielded by her privilege and then trapped by her situation. Uncomfortable scenes, have her gullibly open up about her filmmaking, wanting to tell stories that look beyond her class to those less fortunate, but is, unsurprisingly, met with much scepticism from university lecturers and friends alike.

There is also the bizarre if successful casting of Tilda Swinton, a friend of Hogg’s since school, playing the mother of Byrne’s, the actor’s real-life mother. The elephant in the room, considering that the film does address issues of class and nepotism. Swinton expectedly offers a painstakingly accurate depiction of this stiff upper lip yet loving matriarch; all grey-haired, prim and proper, always tidying up behind people. Anthony’s situation unfathomable to her, unable to make it go away with a cup of earl grey tea.

It would be easy to relegate this relationship as just a life lesson for Julie and a self-retrospection for Hogg. Exposing these skeletons in her closet opens her up to scrutiny for her advantageous life, more than anything else. It’s not until a scene post the couple’s break-up, in an intimate moment of introspection, Anthony breaks down, pangs of guilt and the presence of Julie’s friendly face contrast the ugliness of his life, that we get the slightest insight into his true feelings, that through it all there was a genuine connection between them.