After The Storm is a moving, yet unsentimental portrayal of inter-generational relationships, fraught family dynamics, and the fragility of the human condition. Part time father Ryota (Hiroshi Abe) spends his limited income on gambling, instead of child maintenance, and longs to rekindle the love lost when his ex-wife (Yoko Make) divorced him. His tiny one-room […] 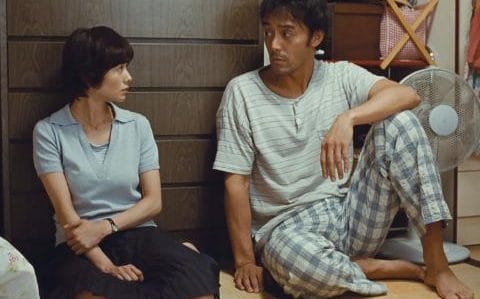 After The Storm is a moving, yet unsentimental portrayal of inter-generational relationships, fraught family dynamics, and the fragility of the human condition. Part time father Ryota (Hiroshi Abe) spends his limited income on gambling, instead of child maintenance, and longs to rekindle the love lost when his ex-wife (Yoko Make) divorced him. His tiny one-room apartment wall may be filled with post-it notes of ideas, but his glory days as a successful author are long gone, and his job as a private detective lacks glamour or pride; where once he may have won awards for his literary work, now he’s taking surreptitious photographs of cheating spouses at cheap hotels. He tells everyone he’s doing the job for research, but it’s clear even he has stopped believing this is true. He lives in denial, yet continues to dream that one day, again, he will be a success, even if for him that means risking all his cash on sports betting, and scouring his mother’s apartment for his late father’s possessions in the hope of pawning something valuable. When he’s asked by his son (Taiyo Yoshizawa) during the once-a-month visit he is allowed, ‘Are you who you wanted to be?’, it’s unnerving both for him and the viewer. Are any of us who we wanted to be? Who can truthfully answer that question without having some regret at lost opportunities, or a wish for a life that’s not been led. Director Hirokazu Kore-eda skilfully investigates this existential angst with delicate honesty, and it’s a delight to explore it through the eyes of his flawed, yet sensitive protagonist.

The film is imbued with pathos; through Ryota, and especially his ageing mother (Kirin Kiki), whose pragmatic and charmingly cynical outlook are portrayed with warmth and humour, we see anguish and a common pining for what could have been. Both of them are plagued by painful regret, unexplored ambitions, and unfulfilled desires. It’s a poignant insight into adulthood – and old age – with its loss of dreams, and reluctant acceptance of the limitations that life offers. But this is not a tragic story: it’s a sweet family drama expressed through subtle conflict and awkward affection, and interspersed with joyful comedic moments – much like everyday life. Whilst its characters ponder their transient happiness and try to balance their drive for personal freedom alongside the responsibilities that tie them down, the audience sees how delicate life is and that nothing is fixed in time. ‘Why envy the future?’ Ryota’s work colleague poses, and then asks him why he can’t be happy in the present. Why indeed; the yearning for what’s to come, whilst being saddened by the past, is a universal melancholy, and Kore-eda’s light touch in exploring this is what makes After The Storm so endearing and enjoyable.

After the Storm is in cinemas from Friday 2nd June.

Review by Zoe Margolis
Zoe Margolis is a London-based author, journalist and commentator on sex, feminism, film, and popular culture, working across books, print, television, radio and the web. She is the author of the bestselling books Girl with a One Track Mind and Girl with a One Track Mind Exposed, and you can find her at http://@girlonetrack.